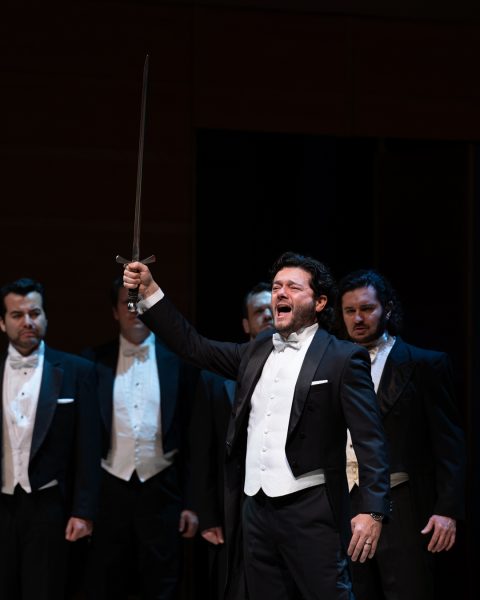 Verdi’s “Don Carlo” was recently performed at the Music Center at Strathmore by the Maryland Lyric Opera. While based largely on the history play by Friedrich Schiller, the production might have been one-step farther removed from the original drama, as it was a concert version with no sets and performers in tuxedos and gowns instead of historical costumes. Yet in the performance of the Maryland Lyric Opera, the drama survived intact and was in some ways even enhanced by stunning performances and highly stylized colored lighting.

…held all of the suspense and drama of a fully-staged performance…a memorable operatic experience.

The opera and the play on which it was based are set in sixteenth-century Spain under the stern rule of King Philip II. Don Carlo, Philip’s son, is everything his father is not—he is passionate, warmly engaged with humanity, and sympathetic to liberty. He is also in love with the noblewoman Elisabetta. King Phillip II, his father, marries Elisabetta in part to fulfill the terms of a peace agreement, leaving Carlo broken-hearted. Quoting from the original Schiller play: “You were mine own,” says Carlo to his former love interest and now step-mother, “by heaven and nature plighted as my bride, but Philip, cruel Philip, stole you from me!” Carlo turns his energies to help his friend Rodrigo fight political and religious oppression, bringing Carlo into further conflict with his father.

The strength of this production is that even as a concert opera, a dramatic orchestral performance and expressive hand gestures and facial expression exemplified the drama of the piece. While there were no sets, props, such as a sword and a treasure chest containing Don Carlo’s portrait, were helpful in bringing the story alive. Such touches as a sparkling tiara for Elisabetta, Philip’s Queen, suggested the position of the characters. Space was used much as in a stage play, as the king appeared on the balcony in one of the tiers high above the stage to suggest the strict hierarchy of the Spanish court. Drama was heightened still further as Rodrigo paced between Queen Elisabetta and Princess Eboli.

A strong, passionate, and physically-close stage presence by Arturo Chacón-Cruz as Don Carlo and Mark Delevan as Rodrigo showed the fraternal-like relationship between the two friends as they boisterously sang “goodness will unite us” in their famous duet. The magic of opera to tell a story through music was witnessed as this melody reemerges as a Leitmotif throughout the opera in scenes with Don Carlo and Rodrigo, making “Don Carlo” an excellent choice for the “concert opera” approach. Soprano Elaine Alvarez gave Elisabetta a stately presence as she sang with power and fury, but also effectively vocalized a more poignant mood in Elisabetta’s beautiful aria “Non pianger, mia compagna.” Conductor Louis Salemno moved audience members with his brilliant direction. He brought orchestral sound effects of church bells and harp strings to the fore, used at crucial moments to reflect the divine and the ethereal.

A visual screen above the performance contained an English translation of the Italian opera (translated from a French libretto). One could “read” the story in this way, adding to the opera’s connection with the original drama. On screen, an image of Jesus displayed marks of crucifixion on his hands. Likewise, an image of a clock without hands and a skull beneath the clock symbolized time running out, foreshadowing death in Act IV.

Colors on the screen matched the stage lighting in the performance, which went from greens to blues to reds, depending on the mood of the moment. Such adaptive lighting (designed wonderfully by Stuart Duke) accentuated the themes of the opera and added vibrancy and meaning to the story and characters. Blue stage lights were used to reflect divinity and creation as the choir sang of that which “may descend … from heaven.” At other times, green colors were used to symbolize the greed (and greed for power) of the king. The color of clothes also reflected the theme and mood as the blue dress of Princess Eboli (a part portrayed and sung superbly by Catherine Martin) expressed regret and sorrow.

This concert opera production of Verdi’s “Don Carlo,” bearing its powerful story that even for the mighty there awaits (in the words of the libretto) “naught but mute dust,” held all of the suspense and drama of a fully-staged performance. Wonderful singing, a magnificent orchestra, choral voices in glorious unison, symbolic lighting, and the occasional atmospheric prop and screen projection all worked to make this Maryland Lyric Opera production a memorable operatic experience.

Running time: Approximately 3 hours and 20 minutes, including one intermission.