Theatre Review: ‘A Monster Calls’ at the Kennedy Center 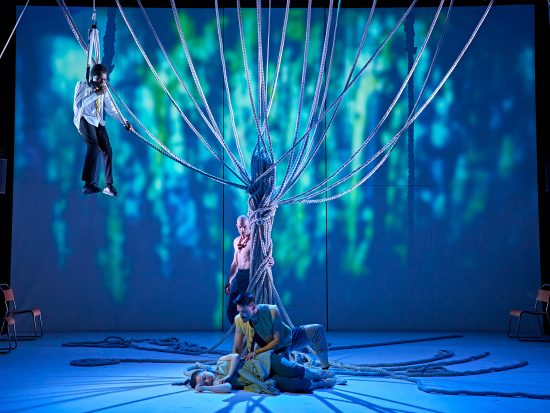 Tall branches stretch skyward, a thick twisted trunk sways, and the coiled roots of an old Yew tree come walking—a monster called forth by a 13-year-old boy’s inner turmoil. Centering on the anger and grief of a teenager struggling with his mother’s serious illness, the play “A Monster Calls” was developed and opened in the UK in 2018, and now makes its American debut at the Kennedy Center. Adapted from Patrick Ness’ YA novel which also inspired a 2016 film by the same name, “A Monster Calls” builds an inventive premise into a spectacularly stylized, dark, and heart-wrenching production.

Connor (Anthony Ale) shows rare responsibility for a 13-year-old, washing the dishes, doing the laundry, and readying himself for school unprompted—a diligence born of necessity when he lives alone with his mum (Bridgette Amofan), who is weak and exhausted from her cancer treatments. At school, he stoically endures bullying from Harry (Greg Bernstein) and Sully (Lauran Rae) while cold-shouldering his ex-friend Lily (Eleanor Kane). Tensions climb when his uptight grandma (Anita Reynolds) and absentee father (Tom Lorcan) join the mix.

Privately, Connor is suffering from horrible night terrors, until the monster (Paul Sockett) begins coming to him at 12:07 am. This monster is “everything untamed and untameable”—“the wild Earth.” And yet, the monster is also a yew tree, like the one Connor and his mum can see out their window. Dreams and reality blur as Connor finds yew berries in his shoe and realizes the tree’s promise (or threat) to tell him three stories and then receive a story from Connor in return will come to pass as the tree continues his midnight visits.

The monster comes alive in ropes that hang from the ceiling, twisted together before our eyes into a tree. Additional tethers and cords allow Paul Sockett and other members of the cast to climb into the monster and soar above the stage. Mike Beer’s sound design gives the monster’s voice a weighty echo, adding to his menace. During Connor’s spine-chilling nightmares, loud discordant music and screams fill the stage, lighting drops low, and blood spills across the back wall in video projections by Dick Straker. Live music, including from two onstage musicians (Seamas Carey and Luke Potter) orchestrates the action, occasionally supplemented by gorgeous singing from Eleanor Kane and Bridgette Amofan.

The set by Michael Vale relies on imagination. The grandma’s stuffy parlor is conjured by a pendulum ball on a rope, swinging across the stage—her antique grandfather clock. An elevator is a square of light projected on the floor (lighting designed by Aideen Malone) and a car ride grows out of two chairs, ropes from the ceiling draped across chests and laps, and a wheel of coiled rope. Director Sally Cookson supplements the stripped-down set with cast members seated along the wings of the stage. As Connor changes out of pajamas, the ensemble provides his school uniform, dropping it piece by piece on stage. As he makes breakfast, they become the kitchen, holding the bowl, milk, kettle, and cereal.

When Connor lashes out, whether at school or at home, no one punishes him. As multiple characters say, “What would be the point?” Just as a detention has little impact on a teenager whose world is already tattered, “A Monster Calls” would land more gently in a time and place not already brimming with grief. With the flags outside the Kennedy Center so frequently at a half-mast this month, is there an audience for a play about a child’s agony and his family’s suffering?

It’s no wonder “A Monster Calls” impressed audiences across the pond. The imaginative stagecraft, low fantasy concept, and fluid directing each deserve praise. But underneath the awe of the monster’s visits and the stories the old tree imparts, the core of the story is tragic and somber, eschewing “comforting lies” for “painful truths,” as the monster himself says. Strap in and bring tissues.

Running time: Two hours and 30 minutes with a 20-minute intermission.