Theatre Review: ‘Ain’t Too Proud: The Life and Times of The Temptations’ at the Hippodrome Theatre 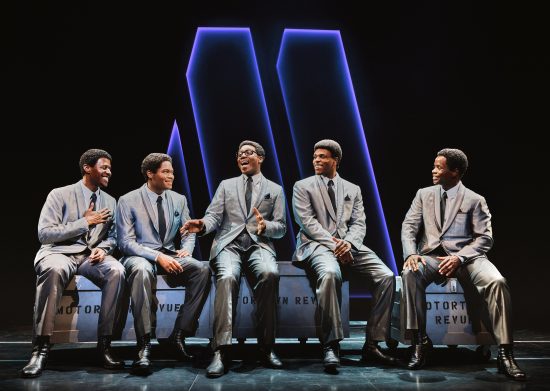 The jukebox musical, “Ain’t Too Proud: The Life and Times of the Temptations,” with music and lyrics from “The Legendary Motown Catalog,” a book by Dominque Morisseau, and directed by Des McAnuff (“JerseyBoys”), is currently playing at the Hippodrome Theatre. The musical follows the life of this foremost Motown group from their beginnings until death ravaged most of its original members. The story is told through the eyes of the man who started the group and is the only surviving member, Otis Williams (Marcus Paul James).

The group began in Detroit as the Primes which included Williams, that wonderful bass singer Melvin Franklin (Harrell Holmes, Jr.), and Al Bryant (Brett Michael Lockley). They combined with a duo in the area comprised of Eddie Kendricks (Jaleen Harris) and Paul Willimas (James. T. Lane). After a lucky meeting with the Motown mogul, Berry Gordy (Michael Andreaus), they were transformed into the Temptations. Bryant would shortly leave the group and would be replaced by David Ruffin (Elijah Ahmad Lewis). These would be the members until June 1968 when Ruffin was kicked out due to erratic behavior.

Anyone who loves great theatre will be on ‘Cloud Nine.’

It was after that meeting with Gordy that the Temptations took off with the music of Smokey Robinson (Lawrence Dandridge). Robinson’s “My Girl” would change everything when it became number one on the Billboard charts. Robinson would write for the group for a few years until Norman Whitfield, whose musical had an edgier sound, replaced Robinson as the primary composer and musical director after the success of Whitfield’s “Ain’t Too Proud to Beg.” After Ruffin left, he was replaced by Dennis Edwards (Harris Matthew) who would be the lead singer in their later music in such hits as “Papa was a Rolling Stone.”

I spent the better part of my waking life in my teens listening to Motown. Sometimes when a show is so anticipated, it can let you down. The show was everything I hoped it would be right from the opening number, “The Way You do the Things You Do,” that rocked the Hippodrome. All the remarkable music is there. There is enough backstory that even those not as intimately acquainted with the group can follow the story. There were also some tidbits I did not even know or remember.

It is the music, under the supervision of, and with arrangements by, Kenny Seymour, and the choreography by Sergio Trujillo that steal the show (and also McAnuff’s direction). It was hard to see who was singing along due to masks, but you could hear the foot tapping and hands clapping throughout the show across all the age groups in attendance.

Otis Williams’ personal story takes center stage. It is his look back at his friends that guides the story. That is, perhaps, the only issue with the show. Some of the facts are glossed over and others, seen through Williams’ eyes, do not quite jive with recorded facts (i.e., the relationship between Ruffin and Kendricks). Since the other members died before 1995, we really only have Otis Williams’ version but that story still makes great theatre.

As Williams, James carries the biggest weight in this show and gives a spectacular performance. He shows his enormous range as a singer and an actor. The final, touching song, “What Becomes of the Broken Hearted,” is his good-bye song to his son, Lamont (Gregory C. Banks, Jr.) and his friends. (Interestingly, that song was made famous by Jimmy Ruffin, David’s brother, not the Temptations.)

Harris brings a wonderful cockiness to Kendricks. Harris, like Kendricks, has a remarkable falsetto and sounds almost exactly like the character he plays. Holmes, Jr. is the joyful Franklin, often the peacemaker, and the one who would remain with Williams as part of the group almost until his death.  Franklin’s bass is so memorable that I wondered how the actor in that role would measure up but Holmes, Jr. becomes the voice of Melvin Franklin. Paul Williams was probably the least known of the group, leaving due to alcoholism and illness around 1970. Lane brings us such a well-developed character that, despite his flaws, he evokes compassion.

Lewis captures the cocky Ruffin who lives on the edge. His musical performance also allows us to understand why Ruffin was so important to the early success of the group as the lead singer. Perhaps one day, a musical will be done about the life of this most tragic Temptation.

Lockley is a smooth Al Bryant. Matthew slides into the role of Edwards and lets us understand why the group was able to withstand the departure of Ruffin. Richard Street, who replaced Paul, is notably played by Devin Holloway. The same is true of the polished performance of Dandridge who would become the falsetto in the group after the departure of Kendricks.

Almost all the numbers were so wonderfully choreographed and performed that it is hard to choose a favorite, but there were three standouts. The first was “Since I Lost My Baby,” which is done as the five break up with the women in their lives due, in part, to their success on stage which meant long road tours. The next was “I Wish it Would Rain,” after the King assassination and the death of Paul Williams.  Finally, it was Kendricks’ final recording with the group, “Just My Imagination (Running Away with Me)” that helped underscore the magic of their R & B sound.

The rest of the cast includes Shayla Brielle G. as Mama Rose and Tammi Terrell, Traci Elaine Lee as Johnnie Mae, and Najah Hetsberger as Josephine. Deri’ Andra Tucker as Diana Ross, Brielle G. as Florence Ballard, and Lee as Mary Wilson shimmer as the Supremes singing several of their big hits. New to company is Joshua Morgan as Shelly Berger who is hired by Gordy to manage the group and allow them to break through to white audiences. He gives a solid performance.

The interesting set—which includes drops, curtains, and projections that take us from the streets of Detroit, to television and recording studios and the Temptations’ live performances—is the work of scenic designer Robert Brill, projection designer Peter Nigrini, and lighting designer, Howell Binkley. Sound is a key element of this show which is superbly done by Steve Canyon Kennedy.

The group was always so nattily dressed, so much so, it became one of their trademarks. Costume design by Paul Tazewell and the hair and wig design by Charles G. Lapointe reminds us that these elements were so essential in the rise of not only the Temptations, but the rest of the Motown groups.

If you are a lover of R & B and Motown, you need to see “Ain’t Too Proud: The Life and Times of the Temptations,” and “Get Ready” for great music and dancing. If you are too young to remember the Temps, you will still love “the way they do the things they do” on stage. Anyone who loves great theatre will be on “Cloud Nine.”

Running Time: Two hours and 40 minutes with an Intermission

Advisory: This show is may not be appropriate to young children due to language, drug scenes and adult themes.

“Ain’t Too Proud the Life and Times of the Temptations” runs through May 8, 2022 at the Hippodrome Theatre, The France-Merrick Performing Arts Center, 12 North Eutaw Street, Baltimore, MD 21201. For tickets go to this link.

This review is dedicated to my late son, Michael, who shared with me a special love of the Temptations. Special thanks to my friend Susan who still shares that music with me.