Theatre Review: ‘Do You Feel Anger?’ at Theater Alliance 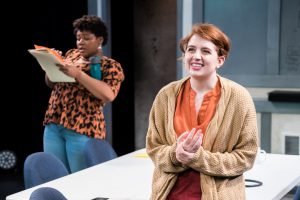 Billed as a comedy, “Do You Feel Anger?” delivers an evening of humor, but amidst the laughter is a profound lesson about women’s experiences in the workplace and the desperate need for female solidarity in male-dominated spaces. Sophia (Maria Simpkins) is hired by a collections agency to teach its employees about empathy, the lack of which has been affecting the company’s bottom line. Quickly, the men make clear that the office is their domain, and that women co-workers exist solely to entertain them and serve as the butt of their jokes—both cruel and tasteless. Eva (Marissa Liotta), the last woman standing, eventually confides in Sophia all the ways she has attempted to survive in this environment and gains some confidence knowing she has Sophia’s support. In passing, Eva mentions Jane (Melissa Carter), an employee the men dismissed as “crazy,” who eventually tried to set the office on fire, before mysteriously disappearing into the ladies’ room, never to be seen again.

…affirms its commitment to providing…socially conscious theater, giving audiences the opportunity to explore vital issues, broaden perspectives, appreciate fine artistry, and, in the midst of it all, enjoy some really good laughs.

The men frustrate all of Sophia’s attempts to deliver the training. In response, she decides to accommodate their sexism, believing that if she meets them halfway, they will allow her to fulfill her professional commitments to the company. Predictably, this approach fails miserably. The men remain uncooperative, dismiss Sophia’s training as irrelevant, and persist in their harassment. In the midst of the continuing hostility, Eva comes to the end of her rope, departs for the ladies’ room, and never reappears.

Her spirit broken, having sacrificed her self-respect and dignity in the attempt to do her job, Sophia has her own office breakdown before making that final journey to the ladies’ room where she meets Jane for the first time and is reunited with Eva. Driven from the workplace, the women apologize to each other for not standing up to the men, realizing now that each woman had been left to fight her own battle alone in an environment designed to ensure that, however hard the women tried, their failure was inevitable.

Director Kelly Colburn has assembled a talented cast for the Washington, DC premiere of playwright Mara Nelson-Greenberg’s compelling piece. You know you’ve seen a brilliant performance when you have to remind yourself that the bad guys are just acting. In mannerisms and not-so-subtle facial expressions, Nicklas Aliff embodied Jordan, the entitled white man, and Shaq Stewart convincingly portrayed Howie, a guy who lacked empathy but was rich in anger management issues. James Whalen brought out office supervisor Jon’s true character with a masterful mix of bullying, gaslighting, and blatant misogyny.

Maria Simpkins (Sophia) made a dramatic transformation from serious professional to office lightweight, so much so that her willingness to cater to the men’s sexism was at times enraging, at others, depressing.  Her violent breakdown will be deeply satisfying to women whose experience resonates with the play’s content.  Marissa Liotta’s portrayal of Eva was memorable for her ability to seem on the absolute edge of sanity while also demonstrating her gift for comic timing.  Melissa Carter ably filled three roles, serving as  Sophia’s mom—a reminder that multiple generations of women have been forced to endure men’s bad behavior—the old man, and Jane, the ladies’-room based voice of female healing, wisdom, and enlightenment.

With this production, Theater Alliance affirms its commitment to providing the community with socially conscious theater, giving audiences the opportunity to explore vital issues, broaden perspectives, appreciate fine artistry, and, in the midst of it all, enjoy some really good laughs.

“Do You Feel Anger?” runs through June 11, 2022 at Theater Alliance at the Anacostia Playhouse
2020 Shannon Place SE, Washington, DC 20020.  To purchase tickets, click here. COVID-19 Health and Safety: Proof of vaccination or recent negative test and masks are required.