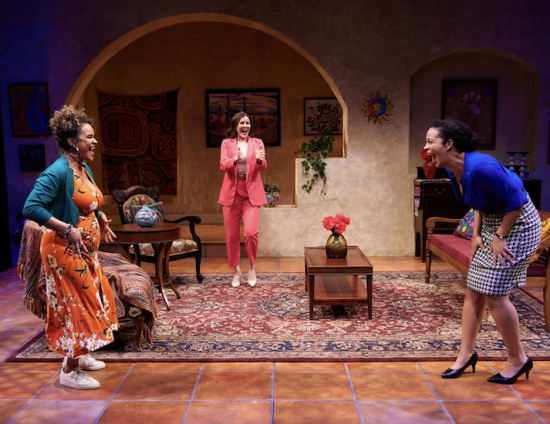 There’s blood in my mouth. The language of my mother and her mother, erased. These thoughts are mused by Patricia in the outro takes of “Flip it and List it” during the final moments of “Dream Hou$e.” Surrounded by debris and mold and family artifacts, she and her sister, Julia, guest star on an HGTV-style reality show to sell their family home in the rapidly gentrifying neighborhood of Hilo Villa, now being dubbed “Highville.” As they perform for the camera, one sister grapples with turmoil in the family’s ancestral past while the other learns how much she’s willing to sacrifice for the family’s future. What is the cultural cost of progress in America? Is cashing in always selling out? These questions and more are explored through the destruction and rebuilding of not just their family home, but through the sisters’ relationship to each other.

Flitting in and out of reality and across the entirety of the playing space, ‘Dream Hou$e’ is a well-oiled machine of energy and passion.

“Dream Hou$e,” a new play by writer Eliana Pipes, is a wondrous and powerful story. Under the expert direction of Laurie Woolery, there was never a moment overlooked. The tension between the siblings is immediately apparent. Darilyn Castillo as Julia Castillo and Renata Eastlick as Patricia Castillo have an uncommon chemistry that dazzles between the “reality” of the house-turned-TV-set and a dream-like state where only they can communicate. This physical manifestation of the bond between sisters also allows for a deeper interrogation of the stakes of the play, particularly when TV host, Tessa (Marianna McClellan), is caught in their dialogue. It is both a site of respite and deep turmoil between the characters—one moment used to comfort, the next to call out a fake accent or past trauma. Represented by a beautiful, galactic projection and confining spotlights, it is also where we see the cracks in the sisters’ relationship break them down, and ultimately, where they must find their way back to heal together from the ordeal of losing their mother and house.

Through a series of game-show games, the sisters are tested both literally and metaphorically on their knowledge of each other, their family, and their motivations. It is an ingenious solution that allows the multiplicity of layers present in the words of the script to be revealed subtly but persistently. Pipes truly has a way of leading the audience to the deepest meaning without feeling like you’ve been hit over the head with socio-political connotations. Instead, we are rocketed through every emotion on the spectrum—one moment laughing at the absurd and silly, and the next, devastated by loss and fragility. The story remains tight, sharp, and clearly focused on the Castillo sisters throughout. I stayed at the very edge of my seat the whole and dreamt about it when I left.

Flitting in and out of reality and across the entirety of the playing space, “Dream Hou$e” is a well-oiled machine of energy and passion. The show is in its third iteration, having run at both Alliance Theatre in Atlanta and Long Wharf Theatre in New Haven. It is clear these characters are immensely well-inhabited but the stellar professionalism of the cast kept the acting fresh and present. With over fifty performances under their belt, the main trio is supported by a local ensemble of actors (Ricardo Blagrove, Zak Rosen, Alix Fenhagen, Zipporah Brown, and Maria Marsalis) who act as movers, TV crew, and watchers—unnervingly silent forces that whisk the action toward its climax. As the renovation progresses so does the concept. The most breathtaking is the moment when they must choose who will wield the sledgehammer to begin demolition. At the moment of contact, a shudder runs through the house and red cordage pours from the crack, extended by pulsing veins mimicking plaster cracks. The house and our hearts bleed with the moment of no return.

The show’s design was an indispensable asset. Projections and video design by Mark Holthusen blended seamlessly with Jason Lynch’s lighting. It was a truly spectacular use of the medium that elevated the magical aspects and grounded the reality. Costumes by Haydee Zelideth were well crafted and gave a clear sense of each characters’ personality and responsibility to the story. Stephanie Osin Cohen’s scenic design instantly transported me to the Castillo family home with rich textiles and family photos, heart-wrenchingly replaced with “Taco Bell” wall art, commodified knick-knacks, and eventually with bleeding walls and California casual re-staging. The altar present at the onset of the action that is quickly removed caught me in particular as the sisters’ rebuilt it with artifacts found in the walls moments before the house sold.

In the welcome notes by Artistic Director Stephanie Ybarra, she recalls the paradox that specificity in storytelling yields commonality, if not universality. I would add that it is in specificity that the true storytelling happens. The audience can reach for any number of metaphors throughout the play, but it is within the deeply personal that we see ourselves. I do not share the same history as the Castillo sisters, but I shared in their loss and have grappled the pressures and pitfalls of the intangible “American Dream.” It was in the character of Tessa, artfully performed by Marianna McClellan, that I saw my part in the story. The voyeur, the settler, the “host” trying to tell someone else’s story because they “deserve it.” It was a stark reminder of my own complicity in the co-opting of diversity for the sake of storytelling.

One of the most powerful moments of the play for me came during the last “game.” Tessa asks Patricia to sell her the bracelet on Patricia’s wrist, then her dress, and finally, her teeth. Tessa begs on her knees for a piece—any piece—because she needs to have her—the shiny sparkly parts of her to show off to the world. How often do we see white women appropriating the bodies, the styles, the voices of women of color? How often have I watched those same HGTV shows where a house is stripped of its character, its history in favor of a white, blank slate and thought how much better it looks now without a thought of the emotional cost? It was a reminder of the gentrification that I have touted and detested. Yet I am also seen in the bones of the moldy walls, in Julia’s need to fly the nest of her hometown, in the decision to let go of history that doesn’t serve. I saw myself in the pain of loss, of trying to make life easier, more comfortable for my loved ones, and universal story of family. No matter who you are, you will find commonality with this play. You will resonate with this story not because it is about you, but because it is about the hopes and dreams and fears of those who you are not.

Go see this play, Baltimore (and beyond). Revel in its joy, its humor, its sacrifice, and its art. See it, and reflect on how closely it hits home.

“Dream Hou$e” runs through May 15th 2022 at Baltimore Center Stage, 700 North Calvert Street
Baltimore, Maryland 21202. Tickets and more information can be found by calling the box office at 410-332-0033 or by visiting their website.