Theatre Review: ‘Into the Woods’ at Creative Cauldron 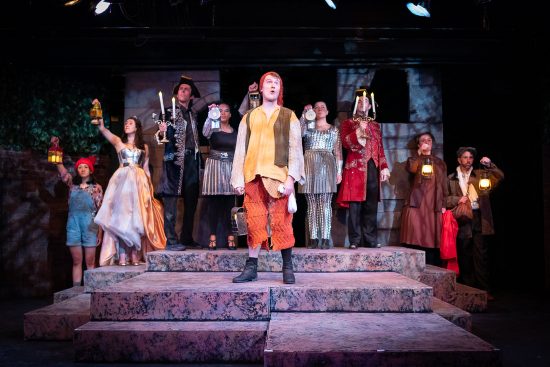 The cast of ‘Into the Woods’ at Creative Cauldron. Photo credit: William Gallagher.

It wasn’t my first journey “Into the Woods,” but the production currently playing at Creative Cauldron is by far my favorite, due largely to the talent and enthusiasm of the cast, but also because the piece is so well suited to the company’s intimate space.

Directed by Matt Conner with music direction by Elisa Rosman, “Into the Woods” examines that age-old warning, “be careful what you wish for,” by following a collection of characters plucked from the world’s classic fairytales as they journey into the woods in search of the things they believe will make them happy. Whether they’ve reached their goal or failed miserably in the attempt, each person exits the woods a bit wiser, no longer the same person who began the journey.

A vocally-gifted cast, notable performances include “Rapunzel,” during which Rapunzel (Holly Kelly) sings extensively about her hair, and Little Red Ridinghood’s (Ashley Nguyen) “I Know Things Now.”  The Witch (Susan Derry) sings a searing “Witches Lament,” and Cinderella’s Prince (Santiago Alfonzo Meza) and Rapunzel’s Prince (Bobby Libby) deliver a laugh-out-loud rendition of the duet “Agony.”  The cast’s crisp delivery of Stephen Sondheim’s lyrics brings out how witty and clever they are while making it easy to catch the text’s humorous subtleties.

Memorable characters include the innocent and endearing Jack (Brett Klock), Cinderella (Brooke Bloomquist), who effortlessly transforms from abused orphan to princess, and The Baker (John Loughney) and The Baker’s Wife (Erin Granfield), both of whom demonstrate impressive comic timing as well as powerful vocal abilities. Cinderella’s stepmother (Amber A. Gibson) embodies the role, leading her darling daughters, Florinda (Rachel Lockett) and Lucinda (Angelica Miguel) around as they prepare for the Ball and pursue the Prince.

Margie Jervis’ (scenic/properties/costume designer) detailed costumes make a significant contribution to the success of the overall production, as does the simple but effective set. Hidden from the audience, the musicians go unseen but certainly not unheard. The small but mighty ensemble, which includes keyboard, strings, reeds, and drums, provides well-paced tempos and a volume that supports, without overwhelming, the singers.

This superb production will remind you why this musical has been charming audiences for almost 40 years. Don’t miss your chance to journey “Into the Woods.”

COVID-19 Health and Safety: Proof of vaccination or recent negative test and masks are required.