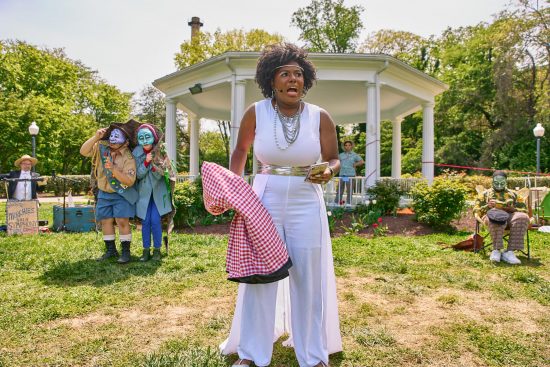 There’s something for everyone at the park. That was the feeling I left with as the sun set on a gorgeous evening full of high jinx and joyful performance. Faction of Fools Theatre Company, the troupe bringing Commedia dell’Arte to DC audiences, has devised a stunning and hilarious new piece that started with the question: who do you see at this park? Each character arrives to the scene expecting to meet someone or something, but comedic chaos ensues resulting in missed (and newly discovered) connections. At its root, Commedia dell’Arte showcases the prowess and ingenuity of each actor and their spirit of collaboration and play. Easy to find and immensely enjoyable, this newly devised work perfectly encapsulated all the delight and tradition of an ancient comedy technique with relevant content and whimsical storytelling.

The style of Commedia is characterized by its use of masks, improvisation, physical comedy, and recognizable character types—young lovers, wily servants, greedy old men, know-it-all professors, boasting heroes, and the like. Featuring new masks designed and created by Tara Cariaso of Waxing Moon Masks, Faction of Fools harnesses the spirit of Commedia that is traditional yet innovative, international yet familiar, and classical yet accessible. It is the repurposing of these characters under a hyper-local lens that contributes to the effectiveness of the performance. The ensemble’s writing was impeccable, poetic, and funny. It perfectly complimented the physical work by utilizing words and phrases that while important to each character had unfortunately different meanings to each. These misinterpretations provided the necessary backbone of the story and created intricate layering and space for each character to develop.

In the tradition of Commedia, the piece featured live music by Mouchie (Jesse Terrill), a character, yet removed from the story to watch and lend musical accoutrement to the action. Terrill grounded the story beautifully with violin, foley, and the final line of the evening, “See you tomorrow?”

At first, we see a man, light on his feet although dressed like a retiree, trucking a full-day’s equipment to enjoy the revelry of an afternoon at the park. Croquet Man (Ben Lauer) amuses himself and the audience by circuitously setting up his course. His hopes of playing are dashed by the stalwart and rule book-following Ranger, Captain Emilio Montoya (Andrew Quilpa), who reminded me of a grown-up Russell from the movie “Up” in his scout uniform with a hand-made, sash for his badges and commitment to “Lawn and Order.” His strong, grounded movements starkly contrasted with Croquet Man—each performer bringing a fully-realized and distinct flavor to their mannerisms. He quickly confiscated Croquet Man’s stick as the rule book clearly stated no croquet after brunch.

Next, we are introduced to Bernard Farfalle V (Colin Connor. He is a dandy DC socialite intent on completing his butterfly collection with the rare and beautiful Aphrodite Fritillary so as to ensure proper paperwork for his DC residential parking permit—or else for fear of having to become, gasp, a Maryland driver! His exit is immediately followed by Blackbird (Natalie Cutcher), an international spy sent by Central Intelligence to gather intel on the notorious villain, the Landscaper. Cutcher’s cat-like movements and fluctuating French accent gave a sense of intrigue that complimented Ranger Montoya’s aesthetic throughout their scenes together. Tasked to find her contact, a man with a croquet stick, was the onset of the night’s hilariously increasing missteps.

The wise-cracking Chef Robby Slay (Kathryn Zoerb) was next to explode into the park. Completely physically engaged, Zoerb was a ball of rage, angst, and at times Shakespearian verse. The chef was also in search of that rare butterfly in hopes that, by serving it on the menu of the disgraced restaurant, “Arlecchino’s Laundry,” it would revive its two Michelin stars. Of no help to him is a distraught old woman, Sofia Escalante (Ruth Elizabeth Diaz), speaking in a mix of Spanish and English, who has lost her dog Boscoe. Diaz’s small and shuffling steps, combined with an epic pant-suit ensemble was assuredly one of those fashionable DC retirees who spend their days gossiping and simpering over their purse dogs, even if they get stuck while trying to sit down.

Though they had been sitting in the front of the audience, it was not until this point that we meet @1materialgworl (Desire Lovey Mae), a selfie-queen obsessed with her image and in the middle of a perfectly planned, proposal picnic—sponsored by Deer Park Seltzer, if you can believe it. Every person who spends enough time on social media knows this character exactly. Mae adds just a touch of instability to their character’s polished outward appearance that dynamically evolved the character over time. Our social-media guru’s fiancé also just so happens to be a landscaper, and well, you can guess where that goes.

On the hunt for the Aphrodite Fritillary for scientific purposes is PhD candidate, Isabel (Francesca Chilcote), who’s love for the butterfly is tested by a growing love in a chance encounter with Bernard. The two characters’ goals are diametrically opposed, and yet through poetic verse, notes of sweetness, and a love of nature, they find their way to become a delightful pair.

Our final character to make it to the park is a book-loving (though no reading) book-clubber, Dr. Gastro Nome (Deimoni Brewington). He is waiting for his bi-monthly club meeting with his copy of “Pride and Prejudice” and Glu-free/Dair-free snacks on hand. Brewington’s loquacious delivery and fantastic energy were a stunning addition to the character-filled evening. I most enjoyed the fight between Dr. Nome and Chef Slay wherein the expert movement direction by Zoerb was evident.

As the characters and the evening wind down and resolved the conundrums they created, we finally get to hear the story of the silent Croquet Man, who had been playing and observing all the goings on in the Park. I will not give it away except to say he was diverted from his true task, engulfed by the beauty, leisure, and magic of the park. I had initially thought that his character was meant to represent the audience, and while I feel that still holds true, I loved that the ensemble created such a rich story for every single character.

The whole performance was a wonder to experience. The actors were present in their bodies, full of energy and whimsy. They interacted with the audience appropriately and it was obvious how much trust they had in each other. Chilcote’s direction paced everything perfectly, and there was never a dull moment to be had. I appreciated the choice that once each character had been introduced, they remained active and used the entire playing space of the park. This made sure to keep our location in focus which was integral to the story being told. Costume design by Lynly Saunders was full of pattern, color, and fit each character’s unique proclivities. Johnny Weissberger’s set and props design added necessary focal points to keep the playing space clear from the audience but did not overcrowd the natural beauty of the location. In short, it was a knockout performance that can be enjoyed by adults, children, and maybe even butterflies.

Theatre is everywhere. This was the third performance I had the pleasure of attending over the past weekend. While every performance was vastly different in its content, genre, and style I am struck by the common threads of specificity and relevance that link those stories to each other and to the human experience. It affirms my belief that it is not about seeing yourself on stage, but seeing commonality in emotion that creates the bond between performer and audience. That is why we go to the theatre. To be struck by something we already know, reimagined into something we could have never experienced on our own.

“Missed Connections” runs through May 15, 2022, Saturdays and Sundays 1 pm and 5 pm, presented by Faction of Fools Theatre Company. It is performed at The Great Lawn at The Parks at Walter Reed, 1010 Butternut St NW, Washington, DC 20012. For tickets and more information please click here.