Theatre Review: ‘On Your Feet!’ at GALA Hispanic Theatre 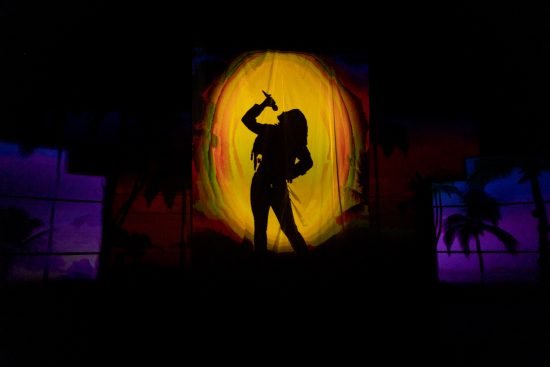 Gaby Albo in “On Your Feet!” at Gala Hispanic Theatre. Photo by Daniel Martinez.

Even if you are too young or out of the loop to know the name Gloria Estefan, you almost certainly know some of her earworm hits like “Conga” and “1-2-3.” The musical depicting her rise to fame, “On Your Feet!”, premiered on Broadway in 2015 and, like Gloria Estefan herself, has played at venues big and small around the US and beyond. Yet, the new adaptation at GALA Hispanic Theatre is the best I’ve yet seen for two reasons: Luis Salgado’s exuberant and joyful choreography and the thrill of the world-premiere translation into the first language of Emilio Estefan, Gloria Estefan, and more than 40 million more Americans—Spanish.

Like most bio-musicals, the plot is predictable. From a start in obscurity, after some hustle and struggle, Gloria Estefan becomes a worldwide sensation alongside Emilio Estefan and the Miami Sound Machine. Whether in English or Spanish, the script is bland, but serves its purpose of stitching together Gloria’s path to stardom with the soundtrack of her greatest hits. Beginning with a concert performance of “Rhythm Is Gonna Get You,” Gloria Estefan (Gaby Albo) takes the stage with the confidence and stage presence of her prime before the story jumps back to her beginnings. As a young girl (Kamila Rodríguez) with an angelic voice, over the phone she sang to her father, José Fajardo (José Capellan), who was serving in Vietnam. Then, as a young woman, a shy Gloria is nudged into the spotlight by her grandmother (Madelin Marchant), sister Rebecca (Gina María Fernández), and especially Emilio Estefan (Samuel Garnica) of the Miami Sound Machine. From the sidelines, Gloria’s mother (Fran Tapia) watches, resentful of her daughter living out the dream she once sacrificed for her family. Hindered by their record label’s limited imagination of the heights a Latin band might reach, Emilio and Gloria push back and innovate to enormous success in a classic immigrant tale.

The seamless choreography from Luis Salgado and gorgeous orchestrations from the music director, Walter “Bobby” McCoy (along with the fantastic band seated above the stage), form the heart of the show. Fringes and sequins adorn the many delightfully eye-catching costumes designed by Jeannette Christensen. The entire cast, including the youngest members Kamila Rodríguez (11 years old) and Winsley De Jesús (12 years old, playing a young Emilio and Gloria’s son Nayib), have smooth steps to match their big voices. The minimalist scenic design by Clifton Chadick creates open space for big dance numbers and a canvas for occasionally cheesy projections designed by Patrick W. Lord, including palm trees, news clips, and fireworks. On the other hand, the lighting design by Christopher Annas-Lee builds atmosphere, complementing the set whether as a park, concert, or a hospital.

This production of “On Your Feet” is political, albeit mostly implicitly. The boldest outright statement comes when Emilio asserts that he is what an American looks like while telling off a record exec. The cast briefly joins him onstage to echo that statement to the audience. Although immigrant experiences are central to “On Your Feet!,” Emilio and Gloria’s bootstrap success story of climbing the industry ladder and integrating into the American mainstream should be palatable to all across the political spectrum—save the fringes.

This show is a counter to anyone who believes that in the United States “we speak English, not Spanish,” as President Trump once said. With the book translated by Esmeralda Azkarate-Gaztelu and new lyrics from Gloria Estefan, the translation itself is a compelling statement about who this story—and musical theater more generally—is for. Subtitled translations on both sides of the stage allowed non-Spanish speakers to keep up with the dialogue, although they were occasionally out of sync and some loose translations, particularly of song lyrics, took considerable artist license. Those needing subtitles should avoid sitting in the center sections front rows.

As a whole, “On Your Feet” is a triumph for its large cast and creative team and GALA Hispanic Theatre. Vibrant choreography, killer rhythms, and enough humor and drama to hold attention through the quieter scenes ensure that even those who arrive only knowing a song or two will have a fun night.

Runtime: Two hours and 30 minutes with a 20 minutes intermission