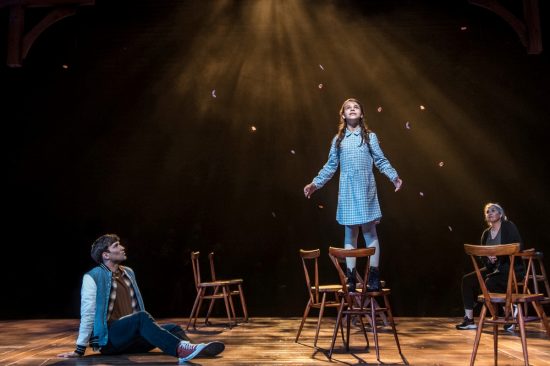 Thorton Wilder’s iconic play, “Our Town,” directed by Alan Paul, is currently playing at the Shakespeare Theatre Company. Some feel that “Our Town” is the greatest American play, but it is definitely the play that best captures the spirit of American ideals.

The place, Grover’s Corners, is actually modeled after a real town in New Hampshire in the early part of the 20th century. The Spanish-American War did not rock the fiber of the nation as did the Civil War which ended less than forty years before the play starts. There is still a fervor for this country to be united, at least in the North, but no young men were marching off to war. Written in 1938, the theme that the future is something we never foresee comes up several times in the play. Wilder knew of the horrors of World War I having served in the military. At the time he wrote “Our Town,” the world was watching the rise of fascism in Europe.

The play was fairly revolutionary for its time. We are introduced to Grover’s Corners and its inhabitants through a character called Stage Manager (Holly Twyford). The Stage Manager not only tells us about the setting and people, but also gives us a keyhole look into the future.

Frequently required reading in school, the play still has so much insight into American life and our lives in the universe. It is always inspirational to watch. Its depth in plot and theme are so intricate and yet so simply crafted, we always find we learn something more about our country and ourselves.

The play is presented in three acts. The first is the affirmation of life; the second is about love and marriage; and the final act is about death and what death means to the living and to those who have passed.

The cast on May 21 had several substitutions due to Covid and some roles had to be recast entirely. The swings and understudies came to the rescue and, thanks to this very talented group of actors, you never would have known this was not the original cast.

The story focuses on two families—the Webbs and the Gibbs. The two actors who play the heads of the families were understudies. Todd Scofield played Dr. Gibbs and Elliot Dash played Mr. Webb, the head of the town newspaper. Scofield was not even listed and an understudy. Dash stepped in as Mr. Gibbs leaving his role as Constable Warren to be filled by Ryan Neely. All three brought depth and compassion to their roles.

The moving characterizations by Natascia Diaz as Mrs. Gibbs and Felicia Curry as Mrs. Webb are the best you may ever see. Both women touch the heart as they realize their chicks are growing up and leaving their nest. Both also blend very well in scenes with their spouses. One of the most humorous scenes is when Curry and Dash are talking to their future son-in-law, George, on the day of his wedding.

Jake Loewenthal as George Gibbs and Chinna Palmer as Emily Webb, the two young teens, grow up before our eyes and give incomparable performances. Loewenthal and Scofield as father and son share one of the warmest scenes in the play. Palmer and Loewenthal have beautiful chemistry. Part of you will fall in love with each of them, and your heart will break for both as death’s shadow falls over their lives.

They are well supported by the rest of this fine cast. Each person is so clearly written by Wilder that you understand them and even know people in your own life who they represent. Christopher Michael Richardson plays the milkman, Howie Newsome, and brings joy and sadness to the character. Lawrence Redmond gives us an understanding of the complexity of Simon Stimson, the church organist and town drunkard. Sarah C. Marshall sensitively portrays Mrs. Soames, the town busybody, but also a lonely woman with her own sad history.

As the town undertaker, Joe Stoddard, Suzanne Richard’s performance brings some new clarity to the character. Josh Decker fits perfectly into the role of Sam Craig, a nephew of Mrs. Gibbs who leaves Grover’s Corner and returns after over ten years of being away. Craig gives us Wilder’s vision of how things change so slowly that we hardly notice unless we leave for a while. Erin Weaver, who was also not in the original cast, fills the role of Professor Willard, a local historian. She does not miss a beat and captures this talkative lecturer.

It is Twyford whose strong shoulders carry this play. She does a magnificent job not only capturing the small town but doing so in voice that reflects Wilder’s intent. She is so relaxed in the role that I almost did not realize the play had started. (We have gotten so used to pre-performance announcements.)

Paul’s directional image is one that holds true to Wilder’s intent while keeping it relevant to modern audiences. For one thing, the set created by Wilson Chin (Read Susan Brall’s interview with the designer here.) makes the play seem more eternal. A huge skeleton of a roof covers the stage, and the theatre is set in the round. Paul and costume designer, Serafina Bush, have some modern dress (jeans and women in pants), but some other costumes are reminiscent of the early 20th century small town life (a simple and austere wedding dress for Emily, aprons on the mothers). The mix works in this production. Even the props (or lack of props) make a point. Everything from soda straws to stringing beans is mimed. Emily’s flashback scene at her funeral is like a snapshot because real props are used for the first time. The most dramatically visual scene brings us back to Emily’s 12th birthday. Her home seems to appear from nowhere right before our eyes. Some purists may object to Paul’s creative vision, but I think it helps keep the material fresh for today’s audiences.

The lighting design by Phillip Rosenberg helps to create an ethereal feeling, most notably in the graveyard scene. John Gromada’s sound design, especially the sounds of trains and birds, helps make you feel as if you are in Grover’s Corners.

Shakespeare Theatre Company’s “Our Town” is as much a part of Americana as apple pie. It pays homage to the mind of Thorton Wilder who had a very modern, cosmic vision of the world. It is comparable to looking at a Norman Rockwell lithograph and captures not only life at that time but those American ideals about which we all still dream.

This play is highly recommended for all ages.