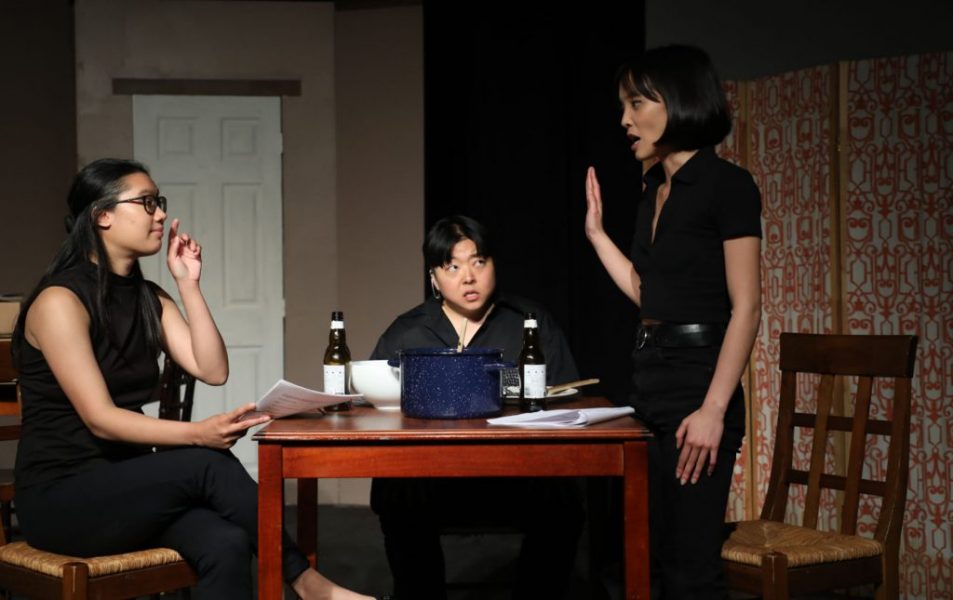 Daniella Ignacio, EN’B, and Jolene Mafnas in “Hot Pot at the End of the World” by Karen Li. Photo by Shealyn Jae.

This month, Baltimore’s Asian Pasifika Arts Collective has partnered with another established theater company to co-produce a new work for the stage: a “book in hand” performance of new short works appearing at Strand Theater through May 22, 2022.

For those unfamiliar with “book in hand,” the plays of this festival appear at a degree of rehearsal and production that’s in-between that of a script reading and that of a fully realized production. There are basic costumes, scenery, and props, as well as lighting, sound, and projection cues. The stage action is blocked, but actors have scripts in their hands, often reading from them. Had another few weeks of rehearsal been possible, those wouldn’t have been necessary. Aside from some awkward prop-handling moments and unavoidable broken eye contact, the work shows both promise and a surprising amount of polish.

Three directors split those duties: Cori Dioquino, co-founder and co-executive director of APAC, directs “Spaghetti Lo Mein” and “Mother Mandu;” Karen Li directs “Cousins and Soup” and “The Secret Ingredient;” Momo Nakamura directs “Hot Pot at the End of the World” and “Support.” A division of labor among six playwrights and three directors often leads to a disjointed final product which lacks strong connecting elements, but here, that’s not the case. The finished product—either evening’s collection—arcs very well and actually benefits from having so many different perspectives.

One reason for this might be that the ensemble is quite small. Only five actors perform nearly all of the roles in the production. Li, who impressed at Strand Theater earlier this season in “Black Super Hero Magic Mama” (read our review here), is brilliant as mother to the nonbinary Kylah, portrayed by EN’B, in “Mother Mandu.” Li also self-directs in “The Secret Ingredient,” a lush movement piece about the Iranian motherland. In both of these plays, Jennifer Hasselbusch serves in an elderly matriarch role. Li’s best actring work, as well as Hasselbusch’s, comes in the one-act “Spaghetti Lo Mein,” a grand and fanciful family story of a restauranteur ancestor at odds with a sinister white exploiter. EN’B does great work in the other one-act, “Hot Pot at the End of the World,” as a researcher newly arrived in Antarctica. Both their humanity and comic timing shine here. Jolene Mafnas is another Antarctic scientist in “Hot Pot,” as well as an emigree to the U.S. in “Cousins and Soup.” Mafnas shares that story with Daniella Ignacio, who carries the weight of the old country while the pair work together at their great uncle’s soup recipe. Both actors are wonderful in that piece, and Mafnas is particularly notable for great voice work in “Spaghetti Lo Mein,” in which her character ages from toddler to adult.

Another source of cohesiveness in this disparate grouping of plays and directors is the common themes of food and family. With one exception, “Support” (the festival’s shortest entry), all of the stories center on food, as a means of preserving culture and celebrating the family. There is also a recurring theme of lost loved ones, and the meaning of legacies that are acquired from them. “Healing isn’t linear,” Li tells EN’B in “Mother Mandu,” as the two of them search their attic for a family recipe.

It’s easy to recommend attending both evenings’ performances to see all of the plays of the festival. Doing so brings a challenge, though, in that it means seeing “Spaghetti Lo Mein” twice. Fortunately, both Ung’s script and Dioquino’s direction are the best of the group, and the full cast (plus Mika Nakano as family patriarch Zhao Jun) deliver their best work in it. Strand’s collaboration with APAC is deeply theatrical—a perfect way to celebrate AAPI Heritage Month.

Running Time: 125 minutes with one intermission.

The AAPI Women’s Voices Theatre Festival runs through May 22, 2022 at Strand Theater Company, 5426 Harford Road, Baltimore, 21214. Tickets are available for purchase online. Patrons are required to provide proof of vaccination and must remain masked.