Theatre Review: ‘The Butler Did it, Again’ at Arena Players 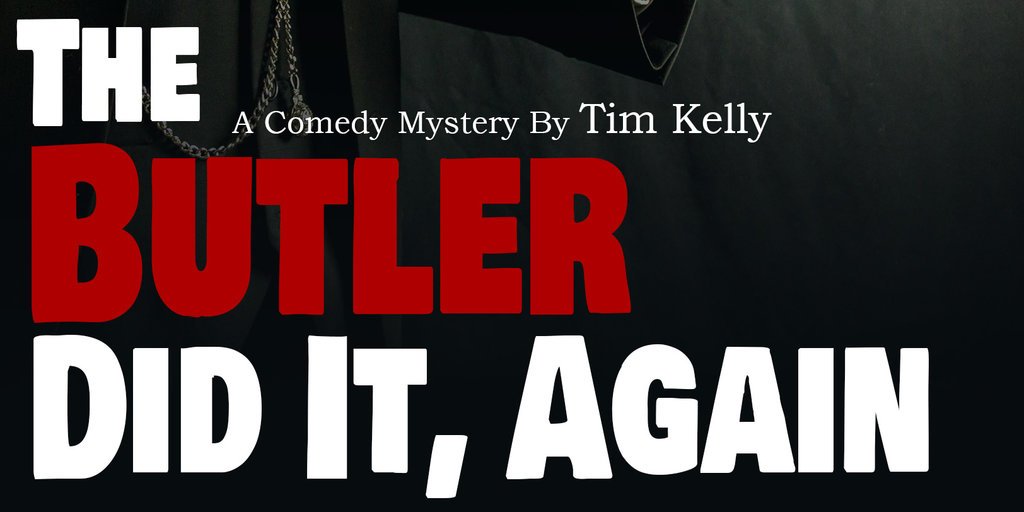 The late Tim Kelly was a prolific playwright who caught the parody bug sometime in the late 1970s. His “The Butler Did It” was a silly, formulaic melodrama, in which every detective stereotype, and a few racial ones, were thrown into a crowd-pleasing stew. Never taken very seriously as a piece of theater, the play did good box office nonetheless. Kelly followed the commercial success with two sequels— “The Butler Did It, Singing” (a musical, naturally) and “The Butler Did It, Again,” which appears this month at Baltimore’s Arena Players.

…more twists and turns than a bowl of spaghetti.

Fans of mystery novels and old movies will instantly recognize the characters in Kelly’s play, as references to iconic figures of the genre. Agatha Christie’s Miss Marple is presented here as Mrs. Maple. Nick and Nora Charles (of the Thin Man series) are Rick and Laura Carlyle. There’s a noir mashup private eye named Chandler Marlowe—all quite predictable and effective. Kelly also delivers two problematic characters, in the form of Louie Fan (a Charlie Chan clone) and Tony Tallchief (a Native American detective). Tallchief appears more or less as a cowboy-type hero, managing to avoid cultural tropes. Still, the “American Indian,” as he’s called, presents a problem in the play. Worse is the depiction of Louie Fan, a character whose lines consist entirely of broken “Confucius say”-isms. The style is obviously pulled straight from 80-year-old movies, which featured non-Asian actors delivering these red- and yellow-face stereotypes. The practice was terrible, but accepted at the time. That it was still accepted when Kelly wrote his plays 40 years later is a highly dubious. It certainly isn’t acceptable in 2022.

That said, leadership at Arena Players enjoyed box office success pre-pandemic with the first play of the series, and has brought the director and cast of that production back for one of the sequels here. In “…Again,” we meet Kelly’s crew of mystery writers in a Louisiana swamp estate called Spanish Moss. Mrs. Maple is a publisher who has invited her stable of novelists for a murder mystery weekend party. They’re all required to attend dressed as the detective characters of their books, tasked with solving a staged murder. The whole affair has “dark and stormy night” written all over it, and even features a pivotal appearance by local carnivore, Charlie the Alligator. As one might guess, the frolic is interrupted by a genuine murder, which leads to more twists and turns than a bowl of spaghetti.

Aaron Androh directs a lively cast of enthusiastic and committed actors. As Mrs. Maple, Gina Lee is officious and grand, proclaiming “I won’t tolerate real murder” when her plans go sideways. Karen Chase is Maple’s assistant, Jane Doe (who swears that is her real name). Rick and Laura are Alan Drew and Cynthia Forbes, completing the homage with their own (stuffed) toy poodle. Jafar Vellines and John Carrington are the aforementioned Tallchief and Fan, respectively, and James Williams is sturdily snarky as the titular butler, Chips. A new author, Ruth Dice, is played with cringeworthy bombast by Janette North. The no-nonsense lead investigator, Chandler Marlowe, is portrayed with great flair by Eric Floyd. The role of mystery woman Linda Hayes is shared between Timeeka Addison and Linda Howard, and Mike L. Barrett is the befuddled Father White. The show-stopper in the cast is Khadijah Hameen as Mrs. Danvers. She consistently demonstrates a director’s sense of spacing and a standup’s sense of timing. Hameen owns the stage completely, even when her face is completely obscured by an enormous wig.

The actors clearly have a great time performing this comedy and, its serious issues notwithstanding, so did the audience.

Running Time: 122 minutes with one intermission.

“The Butler Did It, Again” runs through May 8, 2022 at Arena Players, 801 McCulloh Street, Baltimore, MD 21201. Tickets are available for purchase online. Patrons are required to provide proof of vaccination and must remain masked.