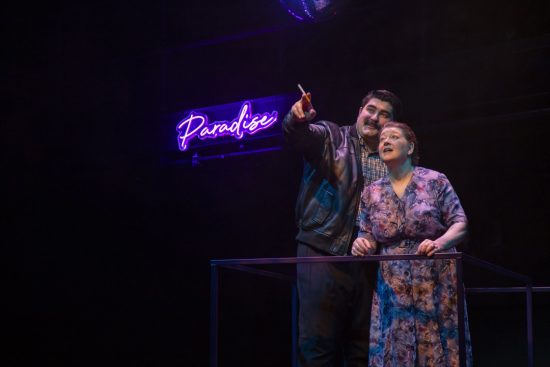 Tennessee Williams’ autobiographical memory play, “The Glass Menagerie,” presented by Rep Stage, may raise some eyebrows for some traditionalists. Director Joseph W. Ritsch, Rep Stage’s Artistic Director, has made a few script changes and employed some interesting set choices. Utilizing conceptual casting, the role of The Daughter, Laura, is played by Brittany A. Davis, an African-American actor, and Dylan Arredondo, who plays Tom, is a multi-racial actor. A very large picture of a smiling, contemporary-looking Black man is projected on a wall in the center of the set. He is the father of Laura and Tom and husband to The Mother, Amanda (Grace Bauer). The father is an absent character, having left the family when Tom and Laura were very young and who are now somewhere in their early 20s. The family is originally from Mississippi and Tennessee and the play takes place in the late 1930s in St. Louis, Missouri. Some may take exception to what we have come to historically expect, but this production is both moving and entertaining. Although Williams had specific directions, he did want this play to be “plastic”—a play that the director can change to make it more relevant and this is Ritsch’s intent.

…moving and entertaining…a new and interesting vision of this classic play.

Williams’ tale is a look at a dysfunctional family—a woman who was from some means in her hometown, now abandoned by her alcoholic husband; a daughter sliding into a world of mental illness whose main companions have become tiny glass animals; an unhappy son who chafes under his mother’s rule as he has become the main support of the family. Tom loves his sister and wants to protect her, but he also needs to care for himself. He wants to leave his family and find a life with some adventure. In the original play (likely due to the era in which it was written), Tom’s homosexuality is hinted at, but here, it is not just implied.

Amanda wants Tom to help find Laura a beau and a potential husband because she knows Laura will never be able to care for herself. Tom finally agrees to help and invites The Gentleman Caller, Jim (Noah Israel) to dinner. We know the ending before it really starts, partially because Tom tells the audience a great deal about the characters and their situation even before the action begins in the Wingfield household. We also figure things out quickly as the characters are so well drawn and we know where they are headed.

Ritsch allows his actors to create these very deep portrayals and the cast gives fine performances. You may not agree with all of his directorial decisions, but they will make you think a great deal about Williams’ intention.

Bauer’s Amanda is a bit different than I have seen in other productions. She is a little folksier and a little less haughty. Amanda seems to know deep inside that things will not go to plan, yet, she can’t help herself in pushing away her son and further isolating her daughter from society. It is a different look at the character, who is, perhaps, a bit more sympathetic.

Arrendo also has a different take on Tom. He is more comforting to his sister and more uncomfortable with the picture of his father staring down at him. He seems worried that he is like his paternal parent but also wishing he could be more like his father who could leave without much of a thought.

Laura, as portrayed by Davis, is still that fragile, emotionally disturbed young woman, a child in a woman’s body. The role may not have the most lines in the play, especially in the first act, but Davis’ Laura seems to be absorbing all that is around her. One can picture the little girl listening to her alcoholic father interacting with Amanda, trying to fade into the woodwork. In her scene with Jim, she comes out of her shell for a bit and Davis’ subtle performance picks up all the little changes as hope briefly comes to Laura’s world.

Israel’s Jim is charming. One can believe that Laura was very smitten with him in high school. At first, we may be angry with the character but Israel makes us understand that Jim’s intentions were never to hurt his old classmate.

Mollie Singer’s set design is a big leap from the one traditionally used for this play. The large photo of the father not just dominates the set but seems to dominated the audience as well. Later in that same spot she projects rose petals cascading in unison with “real” petals falling in one of the doorways. The properties, also designed by Singer, are stark and modern. The daybed is just a metal lounge and dining room table is especially simple and long, perhaps connoting how far apart the family is from each other.

Martha Mountain’s lighting design helps create the ethereal feel that Williams states in his notes he wanted to achieve. Sarah O’Halloran’s sound adds to that feeling of the vagueness in old memories. The costumes by Julie Potter were perfectly in the period and Amanda’s fancy dress for the night with The Gentleman Caller was perfectly out of place and faded.

Rep Stage gives us a new and interesting vision of this classic play. It will get you talking not only about this production but the path of live theatre in the future.

Advisory: This play is not recommended for young children due to adult themes.

“The Glass Menagerie” runs through May 15, 2020, presented by Rep Stage at the Rouse Company Foundation Studio Theatre at the Horowitz Visual and Performing Arts Center, Howard Community College, 10901 Little Patuxent Parkway, Columbia Maryland. Go to this link to purchase tickets.