Theatre Review: ‘The Hunchback of Notre Dame the Musical’ at Laurel Mill Playhouse 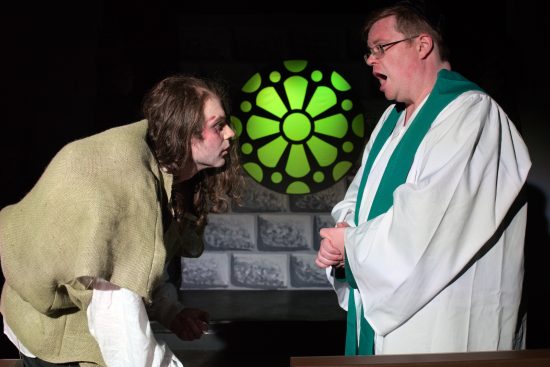 The musical, “The Hunchback of Notre Dame,” is based on the novel by Victor Hugo and the 1996 Disney animated film, with music by the great Alan Menken, lyrics by the equally recognized Stephen Schwartz and book by Peter Parnell. It currently running at the Laurel Mill Playhouse, produced by Maureen Rodgers and directed by Michael Hartsfield.

…a real crowd-pleaser and should not be missed.

The stage musical was readapted and more in tune with the Hugo novel. It is much darker and sadder than the Disney feature and has new songs by Menken and Schwartz. The villian, Frollo, is more multi-dimensional because he is given a backstory that explains his character. The gargoyles are no longer cute and comic relief but rather reflect Quasimodo’s inner dialogue, like a Greek chorus. Much of the dialogue is used to kept the plot moving and to give a prologue and epilogue to the action.

Frollo (Stephen Yednock) raises the baby Quasimodo ,who is born deformed. In this version, the baby is actually his nephew.  Frollo becomes a powerful archdeacon and dislikes the Roma people (gypsies), who are forced to live in hiding in the city of Paris. Dom Claude Frollo is very rigid in his views and can be very cruel, especially to his young charge. He makes the Hunchback live in the bell tower his whole life, in part to protect him but also to control him. Every year on the Day of Fools, the Roma people are allowed to take to the streets to celebrate. Quasimodo (Rocky Nunzio), now grown, sneaks out to join the festivities and meets Esmerelda (Meg Nemeth), a beautiful Roma girl, with whom men are enchanted. One of these men is Phoebus de Martin (Maxim Sobchenko), a young army officer. Frollo also becomes mesmerized by her to the point of obsession. Quasimodo also falls in love with Esmerelda but more for her kindness than her beauty.

The wonderful cast is lead by Yednock as and Nunzio as Quasimodo. The talent of these two actors, both dramatically and vocally, would be hard to match. Yednock’s Frollo is complex—we hate him but understand him. His character also acts as a symbol of distrust for minorities and immigrants. Possibly the best song in the score, “Hellfire,” belongs to him. Yednock brings chills to your spine as he ominously belts out this number—the Roma people just don’t belong in Frollo’s Paris. Nunzio grabs our hearts immediately as the Hunchback. We feel his love and his pain in “Out There.” Nemeth’s Esmerelda gives another sparkling performance. Both she and Nunzio shine in the duet, “Top of the World.”

Sobchenko as Phoebus, and Joseph Downs as Clopin Trouillefou, the poet and rogue, also give memorable performances. I really enjoyed Downs in the number “Topsy Turvy” and Sobchenko and Nemeth perform a wonderfully romantic “Someday.”

The rest of the very competent cast includes Michael Safko as Saint Aphrodisius; Frederic Charlus as Jehan Frollo; Patric Pase as King Louis XI; Megan Safko as Florika; Cathy Holmes as Madame; and Carolyn Lazarovici as the Official. All of these actors are also part of the Ensemble, along with Delaney McGinniss, Bert Nemeth, Anthony Alessandrini, Ilene Chalmers, Becky Batt, Brandon Seehoffer, and Marge McGugan. Lazarovici’s voice stood out and was quite amazing.

As always, Hartsfield is a magical director. On this very small stage, he manages to move this rather large cast without us noticing how tight the space really is. He uses what appears to be simple sets, but in their own way are ingenious and more complex than we realize. Quasimodo’s opening scene is awesome in the true sense of the word. Hartsfield also is the lighting designer and in this venue that is so important. There is a balance of darkness and light, requiring the the actors to be visible to the audience, and Hartsfield accomplishes this seamlessly.

The great set is also the vision of the set designer and carpenter, David Chalmers, who helps Hartsfield create his vision. I appreciated how he created the bell tower in particular—simple but elegant.

Marge McGugan is not only a performer but is also responsible for the design of the sometimes colorful, sometimes somber costumes. They often set the mood, from the scene with the gargoyles to the gypsies’ flashy outfits.

Reese, who will be in the Ensemble in later shows in the run, is also the choreographer. There is a great deal of dance movement on such a small stage with a big cast.

Mimi McGinniss is the musical director and sound designer. Her live music is so perfect that it is hard to remember that it is live and not prerecorded. Having such a wonderful score live helps make the evening even more memorable.

This production was two years in the making due to the pandemic. Laurel Mill Playhouse’s production of “The Hunchback of Notre Dame” is a real crowd-pleaser and should not be missed.

Running Time: Two hours and 30 minutes with an Intermission.

Advisory: Due to some adult themes this production may not be appropriate to very young children.

“The Hunchback of Notre Dame” runs weekends through May 22, 2022 at Laurel Mill Playhouse, 508 Main Street, Laurel, Maryland Laurel Mill Playhouse. For more information and tickets, click here. (Note: from 5/13-5/22/22 Clopin will be played by Brandon Seehoffer.) LMP strongly urges that all patrons that come to LMP be vaccinated and wear masks. At this time, we will not require vaccination cards and masks in LMP but reserve the right to change the guidelines should the positivity rate rise significantly.