Theatre Review: ‘The Importance of Being Earnest’ at Port Tobacco Players 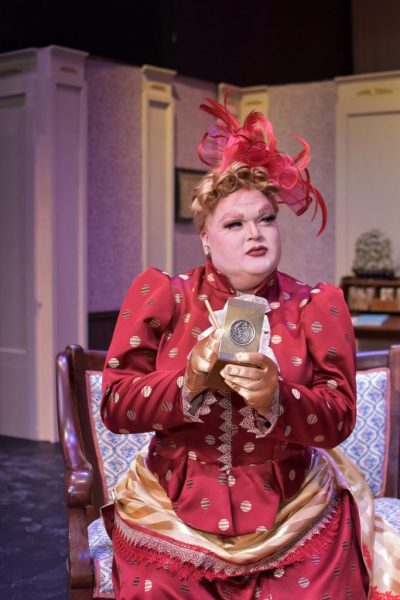 The Southern Maryland theatre community is enamored with lighthearted comedies this spring and the Port Tobacco Players (PTP) is currently offering “The Importance of Being Earnest” by Oscar Wilde. While originally produced in 1895, “The Importance of Being Earnest” is a timeless comedy that was far ahead of its time. Due to societal changes and prejudices at the time, it can be challenging for certain humor to age well over the course of two centuries. Wilde’s genius, tongue-in-cheek dialogue ages like a fine wine because he had the divine capacity to craft a play that saw the core of people beyond the superficial trappings of their era. While Wilde’s personal life was mired in tragedy after the initial production of “Earnest,” it is a story that continues to endure the test of time.

…pure, comedic escapism at its best…

The story centers around two friends named John Worthing and Algernon Moncrieff in Victorian England. They are both in love with two different women and have to overcome their own personal hurdles to be with them. The catch is both women only want to be married to a man named Earnest. The show takes places over the course of three acts and gets increasingly more absurd as the story progresses.

This production was beautifully designed from start to finish. Chris Magee’s set design imbued the production with the most authentic Victorian air. Each set change (done behind the curtain during the two intermissions) transformed the stage to perfectly fit the next act. Lisa Magee’s costume design was period appropriate, detailed, and intricately sewn. My favorite costumes were the teal dress worn by Gwendolen Fairfax (wonderfully played by Kaitelyn Bauer Dieguez), John Worthing’s knee high-socked, country apparel, and Lady Bracknell’s maroon and gold dress.

Anthony Dieguez as John Worthing, Paul Morris as Algernon Moncrieff, and D’Manda Martini (aka Quentin Nash Sagers) as Lady Bracknell stood out in this production. The fun that these three actors had while performing was deliciously palpable. Dieguez and Morris have an insane, comedic chemistry that practically jumps off of the stage. Dieguez’s slightly grounded acting choices serve as the perfect foil to Morris’ overly exuberant ones. While Morris gives Algernon the physicality of a small child with a sugar rush, Dieguez gives John the scrambling energy of a more mature friend who is constantly trying to manage it.

Martini brings an infectious vibrancy to the role of Lady Bracknell that felt akin to Harvey Fierstein’s Edna Turnblad in Broadway’s “Hairspray.” Lady Bracknell’s hilarious haughtiness made her power over her younger relatives’ choices feel even more intimidating. Her bright presence was refreshing and immensely welcome.

Director Rachel Wallace gave a carefree, weightless quality to the staging through her use of brilliantly quick blocking that kept the show clicking along at an impressive pace. The choice to have the full curtain come down at the end of each act brought an old Hollywood vibe that made it feel episodic. Her strategic casting choices, Lady Bracknell in particular, further added to the hilarity of the farce. It was wonderful to see genuine LGBTQ representation on a Southern Maryland stage and a tradition-honoring casting choice (since 2011, Lady Bracknell has sometimes been played by a drag queen).

It is important to revisit the classics and PTP’s latest production of Wilde’s final comedy gives a fresh perspective that allows it to maintain its relevancy for today’s audiences. This is pure comedic escapism at its best, with a level of silliness that may leave you saying “that was so dumb. I loved it.” At least, that’s what director Rachel Wallace intended, according to her Director’s Note, and that’s exactly what you’ll get from this production.

“The Importance of Being Earnest” runs through May 22, 2022 at the Port Tobacco Players,508 Charles Street La Plata, MD 20646. For more information and to purchase tickets, please visit their website here. PTP is currently requiring proof of either vaccination or a negative PCR test for all patrons 13 years or older.