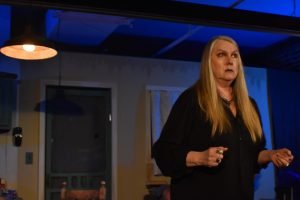 The world premiere production of “Twigs & Bone” is currently playing in one of the city’s most intimate and charming theatre venues. This small but mighty company is offering audiences an evening of spine-tingling suspense, hair-raising twists, and the occasional heart-stopping revelation.

…brilliant acting and a memorable tale…

When Moira’s (Aubri O’Connor) parents quit answering their phone, the young lawyer travels to their rural home, concerned for their well-being. Slowly, Moira discovers her parents are living in absolute filth, indulging in strange pastimes, and entertaining fantastical ideas detached from reality. As her visit unfolds, the source of the family’s dysfunction becomes clearer, until finally, Moira forces her mother Bonnie (Lynn Sharp Spears) and father William (Tom Howley) to face down the deep regrets and disturbing secrets they have kept buried for years.

The cast is superb. Spears and Howley bicker and snipe at each other as if they’d been a married couple barely tolerating each other for decades. When the action intensifies, they deliver frighteningly believable performances. O’Connor personifies the young professional, but also seamlessly transforms into an incredulous, and ultimately, rage-filled daughter. A versatile cast, Spears also serves as director and O’Connor as producer.

Simone Schneeberg and Dan Remmers’ creative set design provides the illusion of a three-story home  that features aging appliances, a well-worn sofa, and an attic full of secrets. At various times, Irish fiddle music fills the theatre (sound by Charles Lasky), which adds to the rural, isolated atmosphere. The lighting design by Helen Garcia-Alton is vital to both depicting the gradual movement of morning into evening and  intensifying moments of shock and suspense.

This play won’t be around forever and seating is limited. Make it a priority to treat yourself to brilliant acting and a memorable tale before “Twigs & Bone” is gone—and with it, your chance to unlock its secrets.