‘A Quick 5’ with January LaVoy, actor, ‘Fires in the Mirror: Crown Heights, Brooklyn and Other Identities’ presented by Theater J 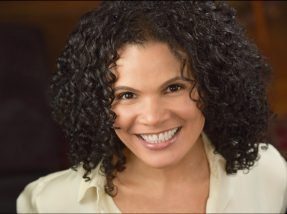 On June 9, 2022 Theater J Presents opened the groundbreaking, documentary play, “Fires in the Mirror: Crown Heights, Brooklyn and Other Identities.” It was conceived and written by Anna Deavere Smith, who also was in the original production. It was performed shortly after the violence and unrest in the Crown Heights neighborhood of Brooklyn in 1991 and acclaimed by The New York Times as, “The most compelling and sophisticated view of racial and class conflict that one could hope to encounter.”

It tells of the riots in that area from several perspectives. On one side was the Afro-Caribbean residents and the other, the Chabad Lubavitcher Jewish residents, both living in the same community. When a Black child is killed by a motorcade of the Lubavitcher Rebbe (head rabbi) and a Jewish scholar is slain in retaliation, the incidents became the incendiaries for violent riots that shook the community and the whole city.

The play in the wake of the George Floyd protests’ remains relevant and cautionary. It reveals both racism and antisemitism still so insidious in this country over thirty years later.

January LaVoy (she/her) is an Atlanta-based actress, best known for her role as Noelle Ortiz-Stubbs on the long-running ABC daytime drama “One Life to Live,” and her work as a voice actor. She has appeared on and Off-Broadway, in regional theaters across the country, and guest-starred on several prime-time network series, including “Elementary,” “Blue Bloods,” and “N0S4A2.” An Audiofile Magazine “Golden Voice” since May 2019, January has an extensive body of work in both narration and commercial voiceovers. She has hundreds of audiobook titles to her credit, and her voice has been heard in national campaigns for dozens of products. She shares a 2020 Grammy nomination with Meryl Streep and the cast of the “Charlotte’s Web“ audiobook, in which she plays the title role of Charlotte.

Can you tell us a bit about yourself?
I was born in Bridgeport, Connecticut, and lived in there through college (at Fairfield University), briefly moved to NYC, and then did my graduate studies in acting at the National Theater Conservatory in Denver, Colorado. I returned to NYC after completing my MFA, and after two wonderful decades in New York, I moved to Atlanta, Georgia, where I now live with my partner, Will, and my cat, August Wilson LaVoy. I split my time between my work as a voice actor and audiobook narrator, and working in theater, which was my first love. My agent likes to say that my voice work “pays for my theater habit,” and she is not incorrect!

Before reading or seeing this play, what did you know about the incident in Crown Heights if at all?
I grew up about 60 miles from NYC, and I was in my teens when the events of the play occurred, so I vividly remember watching it unfold on the nightly news. So, I knew (at least in broad strokes) what happened—I remembered the names of Gavin Cato and Yankee Rosenbaum—but I had no idea why. One of the most fascinating aspects of working on this piece for me was finally getting to understand and learn about the backstory, the circumstances prior to August of 1991. I don’t recall there being much context provided in the media at that time.

As far as what I have learned, I can hardly encompass it for you. There has been (and continues to be) so much to learn about these people, their backgrounds, their customs, attitudes, and traditions. I read books, blogs, listened to podcasts, watched documentaries, and spent a lot of time reading contemporaneous news articles, when I could find them. Because I am Black, I probably devoted more time to researching and learning about the Lubavitch community and Orthodox Jewish faith in general. I also had a lot of really interesting conversations with many friends who have Caribbean roots, since that’s not my personal background. But the biggest takeaway is probably that if you speak to 10 people who identify as being from any particular group—no matter how similarly they may live—you will get ten different answers about their thoughts, feelings, and perspectives. These groups are not monolithic. I try to be as mindful of this as possible now in my life.

This play will be performed in a Jewish Community Center in Washington, D.C. What message or messages do you want the audience to take away from the play?
I am so excited and truly honored to be invited into this community to perform this piece. I had a lot of Jewish friends in my community growing up, so this is not my first time performing at a JCC! (“Joseph and the Amazing Technicolor Dreamcoat” was the first, back in high school!) It’s my desire to do as much listening and learning as possible while I’m here, and that’s my wish for anyone who comes in to experience the play with us—that we all push ourselves to listen a bit harder. I don’t think that many of us are primed for listening right now. I think that social media and the speed of information makes us impatient and makes us “check out” quickly. Our expectations are set at a level of brevity. TikToks, tweets, posts, even headlines—these are designed to be digestible in a moment, to allow us to move on and consume more things quickly. The ask here is that you sit in a theater and listen to one person perform 29 monologues for over 90 minutes (and some of them are long!) and I think just the act of engaging in that way is very powerful. Not only to listen, but to listen without responding! I think it can be a powerful training tool, to help us become better listeners in the real world. And I believe that is a skill that all communities can benefit from.

Would you rather act or direct, and do you have any projects in either of these on the horizon?
I do love both, but the older I get, the happier I am in the director’s chair. Acting takes its toll, especially the kind of roles that I’m asked to play at this point in my career. I feel so blessed to have made my living as an actor for so long, but I will admit, working in voiceover has me quite spoiled. I get to go to work without worrying about how my hair looks!! I do have a couple of offers on the table for some exciting directing projects—particularly working with young playwrights, and playwrights of color—so we’ll see how it all falls out with my schedule. But I doubt I’ll ever fully retire from acting in the theater. As I said, it is and always will be my first love!

Theater J will be presenting “Fires in the Mirror: Crown Heights, Brooklyn and Other Identities” from June 9-July 3, 2022 at Ediavitch DC JCC’s Aaron and Cecile Goldman Theater, 1529 16th Street, NW, Washington, DC 20036 (just four blocks from DuPont Circle).  Parking is available at Colonial Parking, 1616 P Street, NW). For tickets call the ticket go to this link. If you cannot attend in person, the play will be available to stream from June 21-July 3, 2022. To get streaming tickets go to this link.

For more information on Theater J, go to their website.