Dance Preview: Howard County’s ‘Bald Ballerina’ Is Back with A Lot of Love at Annual Fundraiser to Combat Breast Cancer 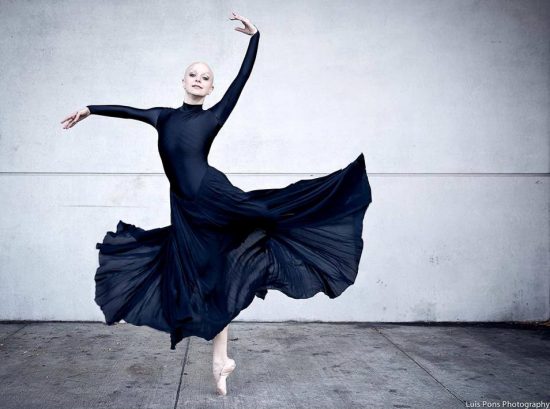 Maggie Kirduka, the “Bald Ballerina,” in a modern ballet created for her for the “No One Survives Alone” benefit at HCC’s Smith Theater on June 5, 2022.

“Returning to dance has been a way to focus on something other than cancer, said Maggie’s mom, Adona Kudirka, “and she’s grateful for all the support.”
Dance bags filled with leotards, pointe shows, and bandaids are packed and ready to travel to Columbia for this Sunday’s “No One Survives Alone” cancer benefit. “When Maggie  puts out the word, everyone tries to make it,” says Broadway triple threat (actor/dancer/singer) Ashley Fitzgerald who has become a regular—popular with young and old supporters—at the annual fundraiser/love fest.
“Performers are coming from as far away as California,”enthuses the Bald Ballerina, a moniker Maggie Kirduka has given herself after treatments for stage 4 breast cancer have left her without hair.
On Sunday, she’ll perform with her dance buddy, Adrienne Canterna, an award-winning, international star (who once traveled from Germany to perform with her friend). There’s a lot of support for the Bald Ballerina from dancers all over the globe. We, the audience, get to see the best of the best.
Those who saw The Bald Ballerina perform her signature solo to Edith Piaf’s “Non, je ne regrette rien,” will never forget the passion and grief and hope displayed on that stage. When Maggie ripped off her head covering revealing her bald head and then reaching her arms to the rafters, a hush filled the room, then a joyous outburst of jubilation. It made everyone’s best performance list of 2013.
Photo
Earlier that year, Kudirka, while performing in New York City, was diagnosed with cancer. The then 23-year-old Maryland native came home for surgery and medical treatment at Mercy Medical Center in Baltimore.
Kudirka began dancing at four and trained as a youngster in Howard County. She then earned a degree in dance from Towson University in 2013. She received the coveted Rising Star Award at the Howard County Arts Council gala that same year. Kudirka has been invited to perform in the All-Star gala competition at this year’s event in November.
As a teen, Kudirka had chosen Svetlana Kravtsova, owner of L’Etoile, the Russian Ballet Academy of Maryland, and Kravtsova’s husband, dancer Vadim Pijicov, to help Maggie prepare for a college program. The academy, which trains students of many ages, became home base for Kudirka as she took her most daring leap into the hands of the Mercy medical community.
“It’s like family here,” she once said in an in-person interview “and Madame Svetlana is like another mom for me.”
“I’m so proud of her,” responded Kravtsova, a description echoed by others, including her teachers, mentors and, especially her mom, Aldona Kudirka who says her doctors encouraged Maggie to keep dancing. They said her body would respond well if she maintained a routine she was used to. The Bald Ballerina is clear and absolute when she speaks to crowds or privately about the effects cancer has had on her profession.
“I use to be a faster turner and jumper, but things have slowed down a bit, she said. “I have to be a little more cautious some days, because my body keeps changing due to chemotherapy treatments.” (She’s up to nearly 200.)
“No One Can Survive Alone,” the 7th Annual Fundraiser Concert for the Bald Ballerina, will be held at Howard Community College Smith Theater, 10901 Little Patuxent Pkwy, Columbia, MD 21044 on Sunday, June 5 at 2:30 p.m. Performances by  soloist with American Ballet Theater Katherine Williams, Maeghan Hobbs, Ashley Canterna Hardy, Daria Breslin, Kenzie DuMars, Julia Patella,Isabella Torres, Edna Lee Dance Studio, Dee Buchanan School of Dance, Studio Bleu, Design In Motion, Academy of Russian Ballet, Mid-Atlantic Center for the Performing Arts and many more.
Masks are required for the entire audience.
For tickets and more information, please click here.