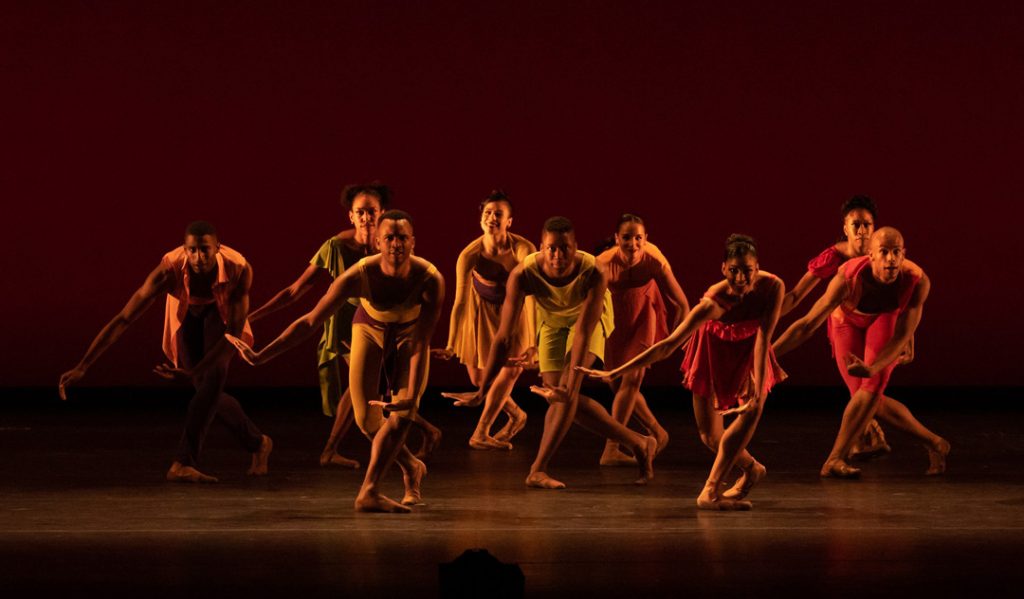 It took over two hours to get to the point of ‘’Reframing the Narrative” (Program A) at the Kennedy Center Opera House. My “ah-ha” moment came as B.B. King sang from a recording of “Let The Good Times Roll.” This is what the concert was meant to be—singing, dancing, and celebrating Black ballet dancers who have not been properly recognized. What a wonderful piece! I have never seen ballet dancers call out to the audience to join in on the hand-clapping and belting out the lyrics in “Bluff City Blues,” performed by Collage Dance Collective.

When we were not jumping up and down in our seats, “Reframing the Narrative” got us to think seriously about Black ballet in America.

There was little narration that began in darkness with a “god voice” speaking to us from afar. The MOBBallet (Memoirs of Blacks in Ballet) Roll Call listed 621 names. Howard County’s own Alicia Graf Mack was among them.
Performances bring together Dance Theatre of Harlem, Ballethnic Dance Company, and Collage Dance Collective along with other Black identifying ballet dancers from across the globe to highlight the incredible work these pillar companies are doing in ballet today.
“Together we will consider what ballet could look like when we gather the best of what our path has to teach us, so that we can achieve full potential moving forward,” said the hidden person and noted in the program (available through a download on a QR in the Opera House lobby). Check with ushers for the scarce, large-print paper programs that lists The International Association of Blacks in Dance, led by Denise Saunders Thompson, president and CEO, and Theresa Ruth Howard, founder of Memoirs of Blacks in Ballet. Both women greeted the audience midway during the show and shared their appreciation for the Kennedy Center that continues to be on the cutting edge, giving voice to Black artists—especially Black ballet dancers—and offering a place where being Black is the normal rather than the exception.
It’s somehow appropriate that Dance Theatre of Harlem (DTH) opened “Reframing the Narrative” dances. The late Artistic Director, Arthur Mitchell, co-founded DTH with Karel Shook in 1969. In part, it was as a response to the murder of Martin Luther King Jr. to prove that a company of Black dancers could contribute a new style to the spectrum of contemporary classical ballet. That he did—and then some.
Mitchell sacrificed a well-established career as a star with the New York City Ballet to gamble on his own company and school. He could have based it anywhere, but, for reasons of sentiment and social responsibility, chose Harlem.
“We’ve proven that Blacks can do classical dance,” affirmed Mitchell at a press reception for his company’s 1993 Kennedy Center engagement. “Today, we’re considered a solid dance company with racially mixed performers. We give a fresh approach to ballet that attacks the stodgy preconceptions of what classicism in dance is all about.”
Although the myth about Black ballet dancers may have been exploded, racial prejudice in the White ballet world still exists nearly 30 years later, emphasized in this program. Few Black dancers are seen in international companies with roles above corps de ballet.
Since King’s death, DTH has proven itself a company equal to the best of its kind anywhere in the world. Still, with all this internationalism and current blend, it is important to note that DTH continues to emphasize that Black ballet is beautiful, as seen in the opening dance, “Balamouk,” an explosion of orange hues and vibrant dancing. Cuban-born Annabelle Lopez Ochoa created this eye-candy ballet for ten dancers, one male dancer dressed in a kilt. Les Dickert designed the lighting that followed individual dancers in and out of groupings to remind us of older ballets like Nijinsky’s “Les Noces” and Paul Taylor’s “Esplanade.”
DTH returned to the stage to show off its classical repertory, overseen by current Artistic Director Virginia Johnson, the epitome of a beautiful, Black ballerina. The odalisques variations from “Le Corsaire” brought yells and applause as loud and powerful as the first dance received. It was that kind of night with constant cheering from the tony audience—nice to see so many well-dressed men at the ballet.
Highlights from the ballets include the aforementioned joyful “Bluff City Blues” by the Collage dancers and the closing new work by Donald Byrd, “From Other Suns,” a sensitive look at longing to belong. This Kennedy Center commissioned, modern dance/ballet “brought together bits from the choreographers and directors—men dressed in white tees and black tights a la Arthur Mitchell. Arms reaching to the heavens brought Alvin Ailey’s “Revelations” to mind. The uplifting, somewhat spiritual score by Carlos Simon carried the message that Black ballet dancers deserve praise, thankfully celebrated in this performance again and again. It was especially gratifying go see both old and young at the ballet and may have opened more doors to future ballets than anticipated. When we were not jumping up and down in our seats, “Reframing the Narrative” got us to think seriously about Black ballet in America. (Take your dad to this ballet concert over Father’s Day weekend. He won’t be disappointed.)
Running Time: Two hours and 22 minutes with two 15-minute intermissions.
“Reframing the Narrative” (Program A) runs through June 16, 2022 and Program B through June 17-19, 2022 at the The John F. Kennedy Center for the Performing Arts Opera House, 2700  F Street NW, Washington, DC 20566. For more information and tickets, go online.