Dance Review: The New York City Ballet at The Kennedy Center Appeals to All in ‘Visionary Voices’ 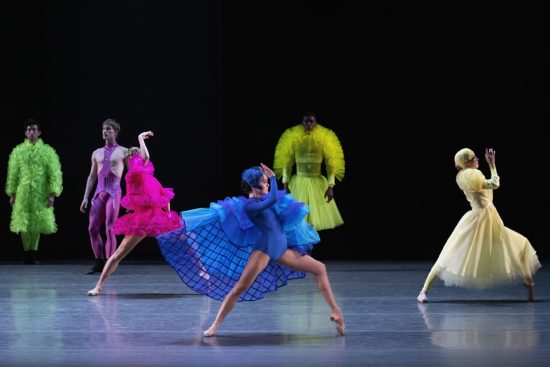 Dance fans know the New York City Ballet Company. That’s the dance troupe with the long-legged ballerinas; strong, technical male soloists; speed; and an unswerving dedication to the founding director. He being, of course, George Balanchine.
Mr. B, as he was known in the ballet world, took the often quoted view that “ballet is woman.” So it’s not surprising that the female dancers in today’s company are exceptional.
They are delicate yet strong, feminine, and independent. Think Suzanne Farrell, Merrill Ashley, Heather Watts, Patty McBride, Sara Leland Kay Mazzo—some of Balnchine’s ballet belles who’ve made great contributions to the success of NYCB. Add to that list Wendy Whelan, an adored alumna who now runs the company with Associate Artistic Director Jonathan Stafford who also grew through the ranks of NYCB.

“City Ballet,”as it is familiarly called, is the most sophisticated dance company, and the current directors carry on Balanchine’s legacy of stripping away the superfluous trimming, leaving clean, clear movement that dazzles.
At the Kennedy Center Opera House, the young NYCB dancers burst onto the stage in “Emanon – In Two Movements,” created by Alvin Ailey dancer, Jamar Roberts, to jazz legend Wayne Shorter’s “Prometheus Unbound” and “Pegasus.” The scores rely heavily on the brass section of the Kennedy Center Opera House Orchestra, sensitively conducted by Ron Wasserman, with a nod to Chris Hemingway’s soprano saxophone solo.
There have been a lot of changes in the company since we lost Mr. B in 1983. The ballerinas have let their hair down—literally. The traditional buns ballerinas wear on the back of their heads have been shaken loose, letting their hair fly this way and that in the jazzy dances.
Still it was a shocking first for this writer to see the girls perform classical ballet steps in sneakers, as seen in Justin Peck’s “Partita,” his latest creation for the company.
A youthful vibrancy permeated last night’s performance and delighted the large gathering of GenX folks as well as the senior balletomanes. The New York City dancers appeared strong, healthy, and joyous on stage and off. Indeed, “joyous” was the key word for NYCB and the three new works that represent a new direction for the 74-year-old company with more diversity in the company and behind the scenes.
Even before the curtain rose, we just knew this would be a memorable performance.
The eight “Partita” dancers, tastefully costumed Jermaine Terry, reminded this writer of a team of wild stallions ready to bolt. Leading the pack, Tiler Peck soars in this dance. At first she hides in the background, then leaps into the middle of the group where she whips off fouettes and other turns perfectly. Dressed in body-fitting shorts, designed by Reis Bartelme and Harriet Jung, Tiler Peck was a  firecracker—part Coppélia, part Black Swan and an all-American firecracker on the Fourth of July. Check her Instagram posts for a glimpse at her amazing dancing.
The program, called “Visionary Voices,” also included dances by other up-and-coming choreographers. At times, Roberts’ new work has a tinge of Ailey’s trademark, arms reaching to the heavens—or Paul Taylor’s “Esplanade” with a playfulness throughout. I loved the short, blonde dancer who flew off stage, leaving behind a twinkle, a big grin, and appreciation by the audience. Too bad the lack of WiFi left some of us without a program to identify the dancers.
Each of the choreographers on this triple bill has roots in the contemporary dance world, and each costumed their dancers in bright, neon colors—gone were the soft pastels of Balanchine’s piano ballets. Everything was bold and colorful.
The brightest belongs to “Suspended Animation,” created by Sidra Bell. It is her first live work for NYCB, originally created for New York City’s virtual New Works Festival and features costumes by fashion designer Christopher John Rogers and lighting by Mark Stanley. The ballet is complicated but still a visual treat for all.
Running time: Two hours with two 15-minute intermissions.
“Visionary Voices: Bell, Roberts, and Peck” ran on June 7-8, 2022 at The Kennedy Center, 2700 F Street, NW,  Washington, DC  20566. NYCB performs “A Midsummer Night’s Dream” at The Kennedy Center’s Opera House on June 9-12, 2022. For more information about the Kennedy Center’s dance programs, call, (800) 444-1324, or click here. For more information on the The New York Ballet, visit here.