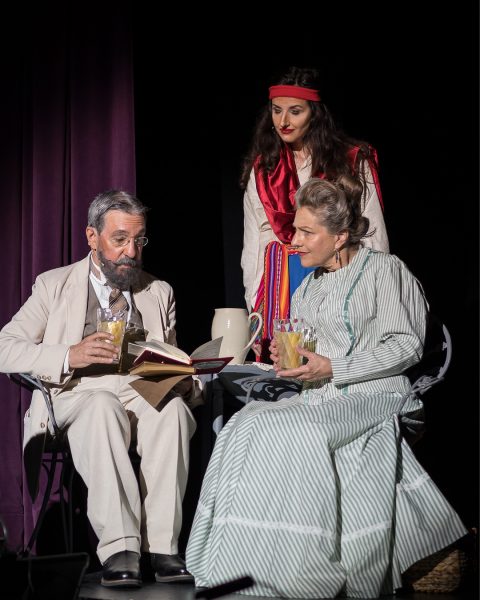 The Victorian Lyric Opera Company (VLOC ) is famous for its productions of Gilbert and Sullivan comic operas and Viennese operettas. This time, the company changes things up with an operetta composed by John Philip Sousa, America’s “March King.” While famous for his “Stars and Stripes Forever” and “The Washington Post March,” the Washington, D.C. native also wrote operettas. VLOC brings this facet of Sousa’s creative production back into focus with “El Capitán” at the F. Scott Fitzgerald Theatre in Rockville, MD. Lavish costumes of the Spanish Golden Age, glorious voices, and, of course, Sousa march music combine to render this production a great success. The show features the witty, British-style lyrics à la Gilbert and Sullivan, with Sousa’s very American march music.

…an excellent musical performance…made all the more effective with broad humor and the infectious enthusiasm of a wonderful cast and orchestra.

Set in Peru during the Spanish colonial period, “El Capitán” features Don Errico Medigua as its central character. Recently appointed Viceroy of Peru, but fearful of his safety, he disguises himself as “El Capitán,” a greatly feared mercenary warrior who was to have fought on Don Errico’s behalf, but who died before being able to do so. This leads to major complications and misunderstandings, one being that Estrelda, the daughter of Medigua’s nemesis the ex-Viceroy, Dom Luiz Cazzaro, has fallen in love with “El Capitán,” who is already married to the proud Princess Marghanza. If you find this all sounds confusing, VLOC agrees and has a humorous recapitulation of the plot in Act III, providing a chart to help the audience keep track of events via a clever PowerPoint-style presentation.

Sousa was known for his march music and the show has stirring marches aplenty, including “When We Hear the Call for Battle,” “Lo, the Awful Man Approaches,” and “We Beg Your Kind Consideration.”  Many of the excellent and well-performed choral pieces and arias are set to march time.

Yet the performance also shows another side of Sousa, such as the surprisingly gentle overture, superbly conducted by the assistant musical director, Stevie Miller, in this past Sunday’s performance. Sousa has composed a poignant aria in “Oh, Spare a Daughter,” sung beautifully by Danielle Bendjy as Isabel, Don Medigua’s daughter. “I’ve a Most Decided Notion” is a charming duet vocalized with wonderful chemistry by Bob Gudauskus and Karen Smith, both of whom stand out for their wonderfully over-the-top portrayals of their respective characters, Don Medigua/“El Capitán” and Estrelda. Another engaging character is Señor Amabile Pozzo, the chamberlain evinced with comic esprit by Sterling Washington.

It is important to note that, for this production, John Philip Sousa (Rob Anzalone) and his wife Jane (Katherine M. Rogers) have been added as characters to make this work more accessible to modern audiences. The Princess of Peru, Taciturnez (Ekaterina Stratuta), has also been added, providing a native perspective on the events of an operetta about Spanish colonialists in Peru.

Set designer Bill Pressly achieves simple but convincing sets in a Spanish style. The orchestra is in fine form, segueing between the operatic/symphonic, march, and Spanish styles with “rollicking castanets,” as the lyrics have it. The production, directed well by Catherine Huntress-Reeve, is very ambitious and may promise a little more than it can reasonably achieve. The notes and synopsis state the production adds to Sousa’s 16th-century operetta setting a bit of Latin American Magical Realism, the biography of Sousa, and even present-day references to Rockville and insights into modern American society itself.

The VLOC production of “El Capitán” is an excellent musical performance of a little-performed Sousa operetta, made all the more effective with broad humor and the infectious enthusiasm of a wonderful cast and orchestra.

Victorian Lyric Opera Company greatly values the health and well-being of its patrons and the Rockville community. VLOC requires all patrons, regardless of age, attending one of its productions to show proof of full vaccination against COVID-19, or a negative PCR COVID-19 test taken within 72 hours of the start of the performance, and a photo ID.