Theater Review: ‘The Mystery of Edwin Drood’ at The British Players 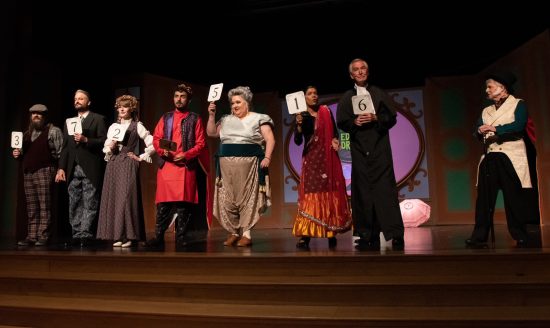 The cast of “The Mystery of Edwin Drood.” Photo courtesy of the The British Players.

“Whodunits” are aptly named because at the end of the story, well, you find out who ‘dun it. However, when Charles Dickens passed away without finishing his novel, “The Mystery of Edwin Drood,” he left his readership with that very question—who was the culprit? In the style of “Shear Madness,” which premiered a decade before this show was written, the answer changes every night when the audience gets to choose the murderer. The British Players’ production of “The Mystery of Edwin Drood” unfolds seamlessly on stage, drawing the spectators in at every fourth-wall break, meta-musical quip, and self-referential indulgence.

…a wonderful and immersive experience…filled with whimsy, charisma, banter, and charm…

Debuting at the New York Shakespeare Festival in 1985, “The Mystery of Edwin Drood,” written by Rupert Holmes, transferred straight to Broadway where it ran until 1987. Based on the unfinished Dickens novel, it was the first Broadway musical with multiple endings (decided by audience vote). Nominated for eleven Tony Awards, it won five, including Best Musical. Holmes won for Best Book of a Musical and Best Original Score. In 2012, Roundabout Theatre Company gave it a Broadway revival and the production was nominated for seven Tony Awards.

The entire cast swarmed the patrons before the show began, bantering with the inhabitants of “the colonies” and fully immersing the house in the British setting. All are called to order by The Chairman, played by Mattie Cohan. Cohan wove the story’s tapestry, unraveling the tale in front of us and inviting our participation throughout the show. No mystery is complete without its victim—the eponymous Edwin Drood played by Mel Gumina. Gumina belongs in the theater, strutting across the stage equipped with a jaunty smile, she brings endless energy, charisma, and physicality that make her a natural storyteller. Betrothed to Drood was Rosa Bud, portrayed by Shelby Young. Young was an operatic songbird with a crown of curls, her quivering vibrato engulfing the room, hitting every note with precision and delicacy. Together, the two meshed wonderfully in “Perfect Strangers,” a giddy song about the realization that you feel the same way about a situation.

The line of suspects is archetypal and all-encompassing. As John Jasper, Douglas Richesson embodied the story’s “red herring” through his jerky tremors and Jekyll-and-Hyde-like personality switches. His rich voice permeated throughout the room, sending a chill down everyone’s spines. The hot-headed Neville Landless and tempestuous Helena Landless, Shakil Azizi, and Niranjali Amerasinghe respectively, enraptured the gathering with their cultural satire and typical sibling hijinks. Amersinghe was chosen as our murderer for the night, belting out her spirited “Murderer’s Confession” with gusto.

To end the story off right, the audience was allowed to choose a happy ending for the two characters. We were delighted to select our darling damsel to be Meghan Williams Elkins as Princess Puffer. Swaggering across the stage as the madame of her opium den, Elkins owned the room as she razzed seated viewers with her deep and pervasive voice during “The Wages of Sin.” Ironically, the other half of our chosen couple was Reverend Crisparkle, played by Chuck McCarter. McCarter was a doting figure throughout the performance, quipping small prayers and serving as much-needed soft-spoken comic relief. Finally, as our detective for the night, we chose Bazzard, played by the adorably awkward Tom Barylski, who was a love letter to chronic ensemble members in the theater business.

The set design by Robert Leembruggen and Mike Lewis was simple but intelligently utilized a projector to change the setting throughout the show. Steve Deming faded the lights in and out, using them to invite the audience to participate at the appropriate moments. Choreographer Valerie Mikles harnessed each cast member’s strengths, intelligently giving some characters simple yet effective moments while also having company-wide moments that had a great impact. Together, costume designer Justine Crimans and Hair/Wig Designer Stephen Welshe worked together to characterize each actor, donning them in swooshing skirts with flowing curls, well-fitting suits, and decadent amounts of hair gel. Overall, the Laura W. Andruski’s directing created a wonderful and immersive experience. While there were some pacing issues in the second act, it had me chuckling, grinning, and rooting for the cast member  of my choice to be the murderer.

The British Players’ production of “The Mystery of Edwin Drood” is filled with whimsy, charisma, banter, and charm. It was well worth seeing and had me considering going back just to see who the murderer would be the following night.

Advisory: Appropriate for ages 10 and up.

“The Mystery of Edwin Drood” runs June 10-25, 2022, presented by the British Players at the Nolan Center at Georgetown Visitation Preparatory School, 1524 35th St NW, Washington, DC 20007. Tickets for all performances are $28 for general admission and $15 for children under 12. Tickets can be reserved online and will also be available at the door.