Theatre Review: ‘A Raisin in the Sun,’ National Players at Olney Theatre Center 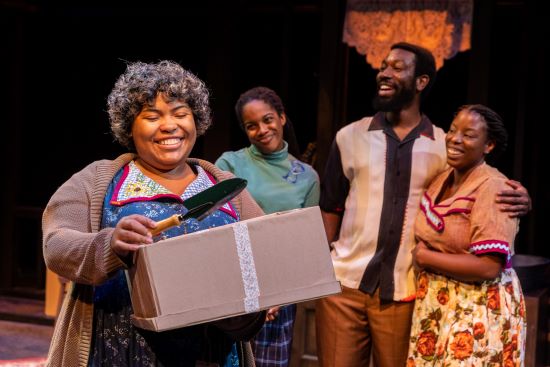 The National Players returns to Olney Theatre Center with the American classic, “A Raisin in the Sun,” by Lorraine Hansberry and directed by Christopher Michael Richardson. “A Raisin in the Sun” originally opened on Broadway in 1959 and the title comes from the Langston Hughes’ poem “Harlem.” In 1961, the film was released with the original Broadway cast which was a cavalcade of African-American stars, some of whom were getting their first major role, certainly their first on Broadway. The cast included Sidney Poitier, Ruby Dee, Ivan Dixon, Lonne Elder III, Louis Gossett, Claudia McNeil, and Diana Sands.

Hansberry lead a complex, but very short, life. She was only 29 when she wrote “A Raisin in the Sun” and it was nominated for four Tonys and she won the New York Drama Critics’ Circle Award—a first by an African-American woman. She also wrote for the newspaper, Freedom, and was not only concerned with Black rights here but with the liberation of black African nations from the rule of white colonialism. Her writings also dealt with her own lesbianism and the oppression of homosexuals. In her brief life of only 35 years, she wrote “Raisin in the Sun,” “The Sign in Sidney Brustein’s Window,” her autobiographical play, “To Be Young Gifted and Black” and “Les Blancs.”

The play opens in Chicago in the late 1950s and deals head on with racial discrimination and the economic plight of African-Americans who moved north after Jim Crow only to find themselves locked out of decent jobs, homes and education. The mother, Mama, Lena Younger (Savannah Gomez) comes into money from a life insurance policy. She wants to use it to buy a new home or at least to put money down on a new home in a predominately white neighborhood. This creates problems and there are also some other financial turn of events. The play also focuses on the daughter, Beneatha Younger (Ariya Hawkins), who is drawn to the new black nationalism. Beneatha is a semi-autobiographical character and reflects a great deal of the Hansberry’s own beliefs.

This is the 72nd Season of the National Players whose goal is to make great theatre accessible to all communities, with special emphasis on young audiences all over the country. It is “the hallmark outreach program of Olney Theatre Center.” They have performed in over 41 states, the White House, and for the military stationed all over the world, bringing “literature to life for three million people.” This group was formed before the pandemic and worked together to finally bring us the present season. This ensemble of actors performed both “A Raisin in the Sun” and “A Midsummer Night’s Dream” in rotation.

Leading the cast as the man of the family is Walter C. A. Riddle as Walter Lee Younger in a powerful role. Walter Lee is full of dreams like so many husbands and fathers who struggle economically, living day-to-day, trying to make ends meet. The character is full of suppressed anger having to kowtow to white society his whole life. His integrity is the central issue of the plot and Riddle gives a powerful performance as his character tries to find out what really is important to a man.

Melanie A. Lawrence is Walter Lee’s wife, Ruth Younger, a the hard-working woman who spends her days cleaning for others and her other waking hours cooking and cleaning for her own family in a tiny flat where her only son has to sleep in the small living room. Lawrence captures Ruth’s exhaustion and frustration and later her joy and hope. Savannah Gomez, as the matriarch of the family, shows Lena’s strength and growth as she tries to find a better life for her family and learns how to help them reach their dreams.

Ariya Hawkins, as the intelligent and clever Beneatha, presents her character as the antithesis of Ruth. She has time to go to college and does not contribute financially to the household. She has boyfriends who want to marry her and offer her a better life. When Beneatha’s life comes crumbling down, Hawkins gives us a window into her character’s despair.

Taylor Rivers as Travis, the teenage son of Ruth and Walter Lee, may be playing a character several years younger, but he captures the youth and enthusiasm of the young man. Jordan Essex brings us the enthusiasm of the young Nigerian suitor, Joseph Asagai. He makes the audience want to help in that struggle (one that still goes on in Africa) not just for liberation from colonialism but for freedom from oppression, even from the new African leaders who will follow. Lorenzo Miguel has a double role of George Murchison, the wealthy college suitor of Beneatha, and Bobo, Walter Lee’s friend. He also does a most believable job in both roles. Max Johnson, notably the only white cast member and only white member of the ensemble, plays the villain, Karl Lindner, a character who does not have any inkling into his own racist beliefs. Johnson keeps Karl from becoming too despicable which allows us to at least try to understand how people could be so ignorant. Finally, Sabrina Sawyer is very humorous as the busybody neighbor, Mrs. Johnson.

Richardson’s direction is interesting. He uses large trunks and crates to create furniture, stoves, and other household items. Props are often placed in these pieces after use which helps speed the production. (It is also perfect for a company that travels.) He helps the actors hit all the right notes in interpreting Hansberry’s masterpiece.

This ingenious set is the work of scenic designer, Ethan Sinnott, creating that small flat in Chicago’s Southside. Jen Gillette’s costumes also embody that time and place. I most appreciated Ruth’s clothing which was neat, clean, unstylish, and worn. Sarah Tundermann’s lighting design and Roc Lee’s sound design also help to the create mood and authenticity.

The National Players’ production of “Raisin in the Sun” makes us realize that some things have changed since 1959, but some things, especially for African-Americans remain the same. They do so with this beautifully crafted and thoughtful production.