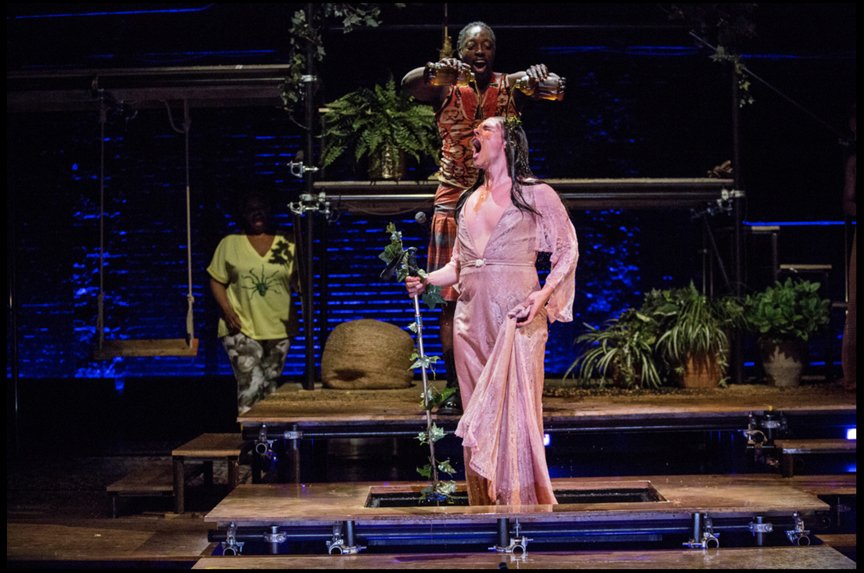 With the number of excellent new writing available to us we must ask ourselves, why would modern audiences want to see a play that is 2,500 years old? Center Stage’s newest production of “Bakkhai” answers these questions with the impressive adaptation of the Euripides play by Anne Carson. Two years and twice postponed by COVID, this chaotic and immersive retelling still feels relevant through its interrogation of idolization, group think, and powerlessness against the whims of nature (or gods).

Dionysus, the newly minted and increasingly popular god, is enraged because the people of Thebes have refused to acknowledge him the accordance he is due. He stirs the women into a frenzy of bloodlust, and they take to mountains to engage in all manners of hedonistic bacchanal. When Pentheus returns to Thebes he attempts too imprison the human manifestation of the god. In retaliation, Dionysus destroys his home, dresses him as a woman, and sends him up the mountain to a gruesome ending at the hands of his own mother, Agave. All this tragedy begs a few questions. What is the price of fanaticism? Is violence really the only way to influence people? When should we reject or respect forces more powerful than us? I cannot help but reflect on the relevance of these same interrogations required by events of the past few years.

Carson has preserved much of Euripides’ voice while intuitively updating language to ground the story in our time and space. There is humor amongst the gore, and most importantly, with such an old text, was coherent to follow. In keeping with the tradition Greek theatre, most of the violence occurs off stage and is retold to those present by the chorus or side characters. The original music that scored the entire piece was exactly what was needed to reinvent Euripides’ verse. Diana Oh’s complex tones ranged from haunting to guttural to rock and roll and back again. They channeled the raw energy of the story into gorgeous sonic fluidity, truly becoming the voice of the Bakkhai. The musical ensemble was completed by Michael Maloney and Alexander Sovronsky with guitar, violin, drum, and flute. The dynamic of the group was evidenced in their joy and cohesion playing the music.

Scenic designer Stephanie Osin Cohen had a monumental task of creating both a visually interesting and safe set to facilitate the raucous events of the play. Construction scaffolding, bohemian tapestries, large squashy pillows, and lush vegetation gave the sense that we could be at a rooftop party ready to revel in daemonic debauchery. Ladders and stairs linked the large vertical playing space, which was cleverly utilized to its fullest extent by director Mike Donahue. Conveniently placed microphones planted the actors in fascinating stage pictures and divided the expositional incantations from the plot-driven reality of the scenes.

Dionysis (Kambi Gathensa) was unnervingly calm as he delivered his harshest punishments onto the people of Thebes. His lighthearted delivery belayed the sinister and powerful rage of a scorned god. He also accompanied the musicians at times as part of Chorus and on drums. Pentheus (Christopher Sears) was uptight, brash, and controlling. The actor effortlessly relayed Pentheus’s internal struggle against the pull of Dionysius’ power and his distinct character bodies clearly shifted him between roles as Messenger and Chorus. Shauna Miles’ interpretation of the blind prophet, Tiresias, felt solid and modern, like an old wise elder who maybe got a little too into the wine. It was her performance as Agave that stole the show. Pure anguish and madness incarnate, Miles exposed the deep heart-aching reality of the characters’ predicament. Both Maloney, Sovronsky, and Miles also performed as the chorus, lending dulcet harmonies and musical prowess to Oh’s invocations. Sovronsky rounded out his performances and the sarcastic and much beleaguered Kadmos and a charming and traumatized Herdsman.

Costumes by Anya Klepikov were a quirky assortment of styles full of rich color and textures. I particularly loved the netted dress turned swimsuit worn by Montague, and the manifestation of Dionysus in his immortal form. Gathesa was clad in a huge black puffer jacket and bedazzled head-piece, like some many horned incarnation of Donda-era Kanye West. The use of construction lights and common outdoor string lights reinforced the setting as some secret, rave location. Emma Deane and Amith Chandrashaker’s use of color saturated the space and immersed the audience into the revelry of the evening particularly effectively during the moments of song.

Nestled amongst all the pandemonium was choreographer/dancer Willia Noel Montague (Invocation of Semele/Dirke/The Bull/and Others), who began the evenings events in a shimmering sequin gown that transformed from white to black as her movements became more hectic. Montague guided the evening as a silent, powerful, and graceful narrator. Her lithe movement visualized Oh’s music, highlighting the emotional undercurrent of the events happening off stage. She was mesmerizing to watch and I often had to remind myself of my responsibility to observe the full live picture before me. Most breathtaking was when she stepped in the pool of wine and honey, the stage flooded with intense red light, and began a passionate and beguiling lament for the death of Pentheus.

The highlight of the evening came for me in the numerous applications of special effects. Creating expectation defying magic is the hallmark of good theatre. The props team at Baltimore Center Stage have truly outdone themselves. Live performance is not an easy place to use liquid, and yet buckets of wine and honey doused over Pentheus. Gravel seemed to rain from the sky onto performers. The gruesome severed head of Pentheus was carried in on a stake by a blood-soaked Agave. A water hose was used to mimic soft rain. There were even confetti cannons! I do not envy the stage crew’s job at the end of the night but did I enjoy the glorious mess.

I am glad that artistic team held strong and was finally able to realize this production. I am often against seeing older pieces as they can often feel played out. This production took all the right measures to make the work feel new, relevant, and interesting. There was clearly a deep interrogation into the heart of the material, taken with care and passion. What resulted is a gloriously chaotic, intense, and profoundly symbolic experience that I won’t soon forget.

Running time: Approximately 1 hour and 40 minutes with no intermission.