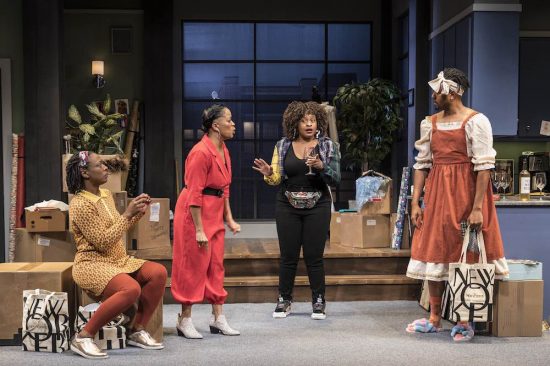 Baltimore’s native son and Park School alum, R. Eric Thomas, is having a banner year so far with three world-premiere plays over the last few months in Philadelphia and two in his hometown. This talented playwright is also a television writer and national bestselling author—and he is on a roll. Following his delightful “Folks at Home” at Baltimore Center Stage, “Crying at Television,” now at playing at Everyman Theatre, is a hilarious and poignant look at people’s attempts to find friendship and personal connection. It is also love-letter to television and what it can mean to people. (For me, it was the original “Star Trek” series that had just premiered on TV that helped during my parents’ divorce. I imagined the cast was my family because they were all so different but chose each other.) Before the play starts, there is a stream of TV themes playing—”Fresh Prince of Belair,” “The Golden Girls,” “Different Strokes,” “Facts of Life,” “The Mary Tyler Moore Show,” and many more classics.

…hilarious and poignant look at people’s attempts to find friendship and personal connection…wonderful night of theatre, full of laughter and heart…

It wasn’t long ago, before cable and multiple streaming services fractured our viewing, that we all collectively sat down and watched the same TV shows—and it was free. The plot lines were a topic of discussion at the office around the water cooler. In those days, less was more—and often better. But this is a different world, and the phenomenon (some say, scourge) of reality TV is the catalyst for the laugh-out-loud mayhem and mishaps that bring four people together. Successful in their careers, they are a disaster at making friends—but how they try!

The play opens with Mackenzie (the vibrant and stellar Starr Kirkland) alone on an elevator in an upscale apartment building, simultaneously crying and and laughing. It’s nothing personal—she was recalling a TV show she just rewatched. She is on her way up to visit with the ex-boyfriend of her brother, Chris (Dwayne Washington), a costume designer for theatre, who may be not-so-legally subletting the apartment. While he was away, she has been taking care of his unseen cat and enjoying the amenities of the building.

Onto the elevator steps Ellison (played wonderfully by Paige Hernandez, Resident Company Member and Associate Artistic Director) and Mackenzie slowly realizes she was a contestant in a reality dating show a decade ago—and also the first to get the boot. Unbeknownst to Ellison, she decides that they have a connection and must become friends. Following Ellison into the elevator and inserting herself into the situation is the supremely geeky and awkward, Taffy (“Like the candy”). Much like the mother Maureen in “Folks at Home,” Thomas is a genius at creating these wonderfully wacky, sometimes inappropriate female characters whose non-sequiturs leave you in tears of laughter. But they also possess an inner sweetness and Erika Rose is glorious in this role.

Chris is heart-broken after his breakup and is trying to hide away in the apartment, but Mackenzie ropes him into a get-together to help to make Ellison her friend. He is always appearing in a different costumes (a sailor and doctor in scrubs) but predominantly in a Cinderella costume—he is trying to work out the mechanics of transforming it into a ball gown. The rest of the costumes by Ivania Stack have a lively, modern/retro vibe.

We discover that to make friends, Ellison, who has a tendency to talk too fast, joined the unChurch and follows a particularly charismatic member. She connects with Chris because he watches the broadcast on TV. Later they discover that the unChurch is not as progressive as it sounds.

Taffy is always trying to solve “mysteries” and she and Chris have a bit with a very funny reference to “Law & Order.” It turns out she is a membership director at a country club which seems odd for someone who tells you she will bring hummus or chips to a party but not both. There is a running gag with a sign that Chris puts on his door with a nod “Gypsy” that has everyone looking for Louise.

There are references to older shows like “Living Single” (the characters would have to be in their 30s or watched reruns) but there is also nods to “Grey’s Anatomy and “This Is Us,” among many. Director Reginald L. Douglas does a wonderful job of keeping the pace and laughs coming. All the actors have brilliant timing and their characters are so ultimately endearing that you would like to become their friend.

Daniel Ettinger’s set is, as always, wonderfully detailed. The use of the sliding elevator/lobby is very clever and there is a surprise toward the end that is a mastery of set, props, timing, and physical comedy—and no one misses a beat. Don’t miss this wonderful night of theatre, full of laughter and heart. Thanks to R. Eric Thomas for bringing such fun and joy to Baltimore and theater. We are proud.