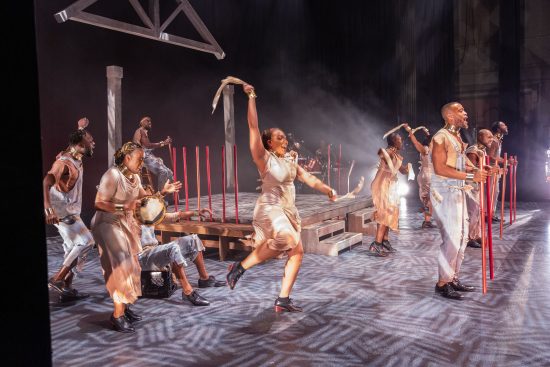 “Drumfolk” is a triumph, plain and simple. A showcase of dance and history, this production is the first of a multi-year partnership between Step Afrika!, the first professional stepping dance company, and Arena Stage. Stepping, a percussive style of dance featuring clapping and stomping, flourished during the 20th century in the historically African-American fraternities and sororities of the National Pan-Hellenic Council, also called the Divine Nine, but has even earlier roots. Drawing on this tradition, “Drumfolk” celebrates the resistance and resiliency of enslaved people and their descendants through a moment of history in colonial South Carolina.

In five movements, mostly choreographed by director Jakari Sherman, drums and drum-like percussion weave each dance in a grander narrative arc. The twenty-person cast builds electric energy and joyful rhythms, using their bodies, African drums, tambourines, and even the audience to establish a beat. Voices soar in chants, spirtuals, hip-hop, and beatbox. It is inspired by the lesser-known history of the Stono Rebellion of 1739, when enslaved Africans rebelled against colonists in South Carolina. “Drumfolk” celebrates African-American cultural heritage, the Stono twenty’s quest for freedom at the cost of their own lives, and the endurance of traditional rhythms and dance. After the Stono Rebellion, the Negro Act of 1740 restricted enslaved Africans in South Carolina from many basic dignities including learning to read, assembling in groups, and playing drums. At the core of “Drumfolk” is the idea that “they took the drums away…but they could not stop the beat.”

Complementing the dance, Kenaan M. Quander has crafted costumes that pull on a variety of historical influences without restricting movement. In the first act, the costuming evokes American slavery, with aproned dresses and fraying overalls. Necks and wrists are adorned with golden bands, suggesting the bonds of slavery but also traditional African jewelry like the ornamental neck-rings worn by the Ndebele people of South Africa. Black leather shoes amplify the synced stepping, until costuming and dance style shift as the production focuses in on Stono. As rebels, the dancers wear plain and tattered clothes, barefoot as the dance style moves towards modern dance and acrobatics. Designed by Erik Teague, monsters with straw hair, pointed hats, and pale masks menace at the colonists that violently put down the doomed rebellion. In the second act, exploring the impact of the Negro Act of 1740, Quander’s costumes draw inspiration from more recent history, with a more militant aesthetic including black berets—a legacy of the Black Panther Party.

The stage, surrounded by the audience on three sides with drummers along the fourth, allows the dancers to engage the audience in clapping or call-and-response chants. The intimate space means their gazes can pierce into the crowd. Center stage, a raised wooden platform offered prime acoustics for stepping while representing a “prayer house,” like the miniature wood frame suspended overhead. Prayer houses were small buildings where enslaved people could legally gather, and which accordingly became sites for coordinating rebellion.

Minimal props, including a couple benches, tambourines, and stamping sticks compliment the storytelling. Occasional narration, sung and chanted, provides historical context, fleshed out by the synopses of each segment of the show in the printed program. Thematically, “Drumfolk” reinforces the ideal of living free or dying, which many of the Stono rebels embodied. Performer Ayana (Reed) Ogunsunlade samples the spiritual folk song “Oh, Freedom,” singing “Before I’d be a slave / I’d be buried in my grave / and go home to my lord and be free.” Chants convey historical facts, including some of the provisions of the Negro Act of 1740, as well as sentiments like “We want to be F-R-E-E free.” Perhaps the only problem in this production is that its unamplified dialogue is not always discernible amidst all the sound.

“Drumfolk” spotlights the Stono Rebellion and its legacy with fury and reverence. An exquisite showcase of African-American art and most especially stepping, the talented athleticism of the cast, and infectious rhythms of the storytelling will impress audiences independent of previous familiarity with these styles of dance. If this production is any indication, the future is bright for the new partnership between Arena Stage and C. Brian Williams’ Step Afrika!

Running time: One hour and 30 minutes with a 15-minute intermission.