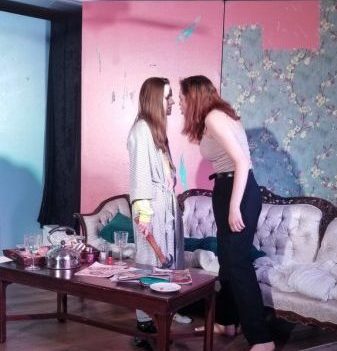 Sometimes theatre, as in all art forms, is not meant to simply entertain. While not always comfortable, it can open our eyes to events and experiences that we hope we will never have to confront. Theatre can also shine a light on issues that should be exposed and make us better and more empathetic. New Direction Community Theater’s (NDCT) presents this kind of story with visceral clarity in its current production of “Extremities.”

Using the beautiful medium of theatre to highlight this issue is both a brave and risky endeavor for which NDCT should be applauded.

Originally performed off-Broadway in 1982, “Extremities” is a thought-provoking and emotional psychological thriller written by William Mastrosimone. Famous actors such as Susan Sarandon and Helen Mirren have lead productions throughout the years and it inspired the 1986, critically-acclaimed film adaptation starring Farrah Fawcett. The basic premise of the play centers around a woman named Marjorie (beautifully played by Amanda Jo Connelley) who experiences a home invasion by a man named Raul (Blaine Becker). After the horrifying event that follows, Marjorie is left to grapple with her two friends (Melissa Davis and Kathrin Bizzarro) about how she should proceed in light of its devastating effects. This play unapologetically deals with the subject of sexual assault and how our society deals—or doesn’t—with it. This is not a production for someone who has unprocessed trauma related to such an event.

The set, designed by Keith Mervine and facilitated by the cast and crew, creates an immersive backdrop for this complex play. What could have been a derivative living room and kitchen set comes alive due to Mervine’s thoughtful dedication to the specificity of its details. A boom box with a CD player, a corded phone, and an outdated refrigerator immediately tells the audience that the story is not set in the present. A purse sitting with a hair clip on it and three sets of hanging keys makes the apartment feel lived in and adds to the authenticity of the story. It is like a place that any of us could have had at some point in our lives—and that’s what makes this set both brilliant and chilling.

While all four of the cast members worked well together to create a painfully realistic performances, Blaine Becker as Raul and Kathrin Bizzarro as Terry stood out in this production. When Becker first walks on stage in the opening scene, everything about him feels very kind, average, and boy-next-door. His transition into the maniacal, depraved attacker throughout the play felt so intense that I kept having to remind myself that he was just an actor and what unfolded before my eyes wasn’t real. Becker creates an overwhelming feeling of unease in the audience that was physically uncomfortable. Bizzarro crafts the quintessential best friend who is career-driven and holds more inside than initially meets the eye. From her genuine reactions during scenes when she had no dialogue to her heartbreaking, chill-inducing monologue in Act II, Bizzarro met every expectation.

Keith Mervine’s direction is full of dedication and passion. Having initially seen the show about 25 years ago, Mervine expressed that this is one that he’s been wanting to direct for a long time. His patience in waiting for the right time and place to produce this show has paid off. His methodical blocking gives this production an excruciatingly emotional quality that caused a blanket of shocked silence to envelope the theater. The accordion effect that Mervine creates between the two leads during the first scene adds a palpable, edge-of-your-seat tension that was thick enough to cut with a knife. I kept silently begging for the scene to shift or end because of how distressing the the subject matter was. While I can’t say it was a pleasant experience, I commend Mervine for having the courage to bring a play to the Southern Maryland theatre community that talks about such an important topic as sexual assault.

For the first time in my experience, NDCT has produced a play that seeks to push the envelope of what is typically socially-acceptable in this region. “Extremities,” and shows like it, need to be seen and discussed. Pretending that difficult topics don’t exist only causes further suffering for the survivors of such atrocities. Using the beautiful medium of theatre to highlight this issue is both a brave and risky endeavor for which NDCT should be applauded.

Content Advisory: This show contains a depiction of attempted sexual assault, partial nudity, strong language, jarring sequences, and torture. If you have unprocessed trauma, please do not see this show. NDCT will have licensed mental health professionals on premise for audience members to speak with if they need to. A portion of their ticket proceeds will go to the Calvert Center for Change.