Theatre Review: ‘Hairspray’ at the Hippodrome 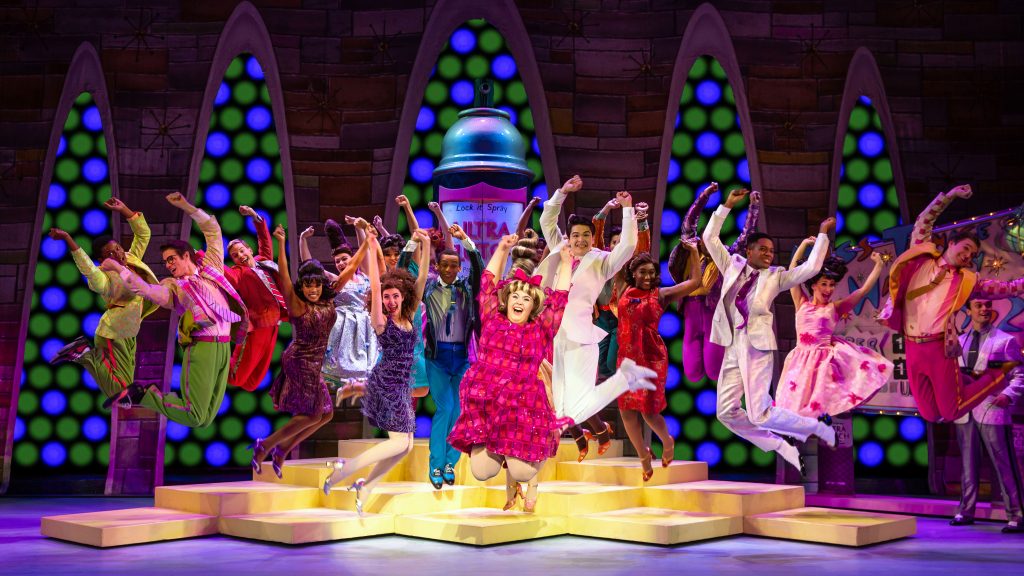 “You Can’t Stop the Beat – The Company of “Hairspray.” Photo by Jeremy Daniel.

Hey, hons! The musical “Hairspray,” based on John Water’s 1988 film, has come home to “Bawlmer” and is currently playing at the Hippodrome. The movie was Waters’ first mainstream film in comparison to his previous, famously outrageous movies that have become cult classics. It starred Divine (who sadly passed shortly after the movie’s release) and his usual cast of characters plus some famous celebrities.

…has not lost one iota of its sparkle…every performance…was exemplary.

The musical of “Hairspray” opened on Broadway in 2002 and received 13 nominations, winning eight Tony Awards, including Best Musical. In London, it was nominated for a record-setting 11 Olivier Awards, winning four, also including Best New Musical. In 2007, the musical version of “Hairspray” was turned into a star-studded film that included John Travolta. It had the biggest opening weekend for a movie based on a Broadway musical at that time. NBC then produced “Hairspray Live!” in 2016 for television.

It is 1962 and the full-figured, 16-year-old “hair-hopper,” Tracy Turnblad (the fabulous Niki Metcalf), dreams of being a dancer on the local Corny Collins Show. (This was based on the Buddy Dean Show that aired on the local channel, WJZ-TV Channel 13, from 1957-1964. Ironically, there was no happy ending. The show was taken off the air because the station was unwilling to integrate.) Her mother is the plus-sized Edna in a loving marriage with her husband, Wilbur, who owns a novelty shop, the Har de Har Hut. Tracy’s best friend Penny Pingleton (Emery Henderson), is a nerdy teen with an ultra-religious mother, Prudy Pingleton, played the multi-talented Emmanuelle Zeesman who also covered the roles of the wonderfully outrageous Gym Teacher and Prison Matron.

Tracy wins a spot on the show and steals the affections of its leading stud, Link Larkin (Will Saverese), away from her arch nemesis, Amber von Tussle (Kaelee Albritton). Amber and her scheming mother, Velma (Addison Garner), will do anything to make Amber a star—and insult anyone who isn’t White or skinny. Tracy befriends some Black kids while in school detention, including Seeweed (Jamonté D. Bruten), the son of Motormouth Maybelle who owns a record shop and hosts Negro Day on the Corny Collins show once a month. Tracy thinks that every day should be Negro Day and helps to fight for integration—which gets her into to trouble. She has an ally with Corny Collins (Billy Dawson) who agrees with her point of view. It all comes to a head with the contest for Miss Teenage Hairspray.

After countless tours and productions over the past two decades, this show is still fresh (and sadly relevant underneath the glitter) and has not lost one iota of its sparkle. There are a so many reasons this musical continues to delight. First, is the fantastic creative team—original direction by Jack O’Brien and Matt Lenz for the tour; original choreography by Jerry Mitchell, re-created by Michele Lynch for the tour; a witty book by Mark O’Donnell and Thomas Meehan; and memorable music by Marc Shaiman with lyrics by Scott Whitman and Maric Shaiman. If you are more familiar with the film of the musical, this is far superior—and there’s nothing like a hometown show playing to a hometown crowd who cheered and applauded throughout the night.

This spectacular production also owes so much to the tremendous cast and ensemble, as illustrated by with three substitutions on opening night—again, highlighting the invaluable talent of swings and understudies who come through in a pinch. The role of Edna, usually played by featured performer Andrew Levitt (from RuPaul’s Drag Race), fell into the able hands of Greg Kalafatas who, along with Christopher Swan as Wilbur, nearly stole the show with their sweet, vaudeville-style “Timeless to Me.” Another show-stopper was Gabriyel Thomas standing in for Sandie Lee as Motormouth Maybelle in “I Know Where I’ve Been.” Kaléa Leverette covered the role of spunky Little Inez for Brianna Kaleen.

Every performance, from the cast to ensemble, was exemplary. It was all wrapped in a beautiful package of glorious, colorful sets by Davis Rockwell; costumes by William Ivey Long; and Wig and Hair Design by Paul Huntley and Richard Mawbey. Don’t miss your chance to see this production. Even if you aren’t a Baltimore native, this show will leave you humming and floating on air after you leave the theater.

Running time: Two hours and 30 minutes including one intermission.