Theatre Review: ‘In His Hands’ at Mosaic Theater 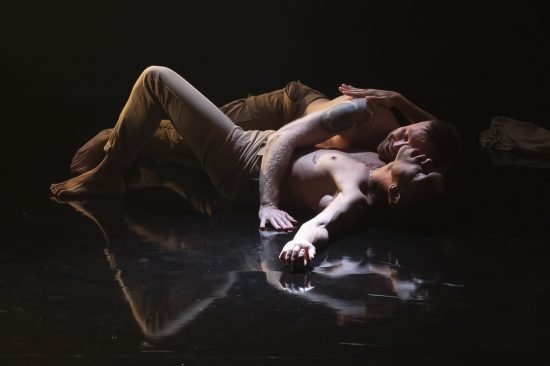 Michael J. Mainwaring (Daniel) and Josh Adams (Chris) in “In His Hands” at Mosaic Theater. Photo by Chris Banks.

Clichés of butterflies or fireworks might be cute, but a kiss that spills golden light out from the heavens, accompanied by the “Hallelujah” chorus is on an entirely different level. Before we learn the characters’ names or stories, this exaltation of queer intimacy establishes that, while Christian religious imagery runs through “In His Hands,” this play won’t be preaching the fire-and-brimstone gospel that has long wounded the queer community. While Mosaic Theater describes “In His Hands” as a “radically contemporary, queer rom-com,” someone who goes in anticipating a light and upbeat escape might be disappointed. Instead, “In His Hands” delivers a lyrical and stylized account of religious trauma, resonant but also painful.

…rich and moving…With bold and distinctive style, this play leaves you with plenty to ponder.

“In His Hands” starts at the beginning with mysterious music and a blowing wind, narrating a dark and empty earth, until He said “Let there be light.” Two men move through the stage with the poise and purpose of interpretative dance and join in a passionate kiss. Emerging from this dream-like opening sequence, we plop into familiar mendacity. Christian (Josh Adams), who goes by Chris, and Daniel (Michael J. Mainwaring) meet at work—some bland tech start-up where Chris is interviewing. After their first meeting, Daniel offers up an eager prayer that Chris gets the position, so he can see “that cute boy” again. Prayers answered, a cautious romance blooms first over the candy bowl on Daniel’s desk, and eventually over a shared love of N64 video games.

Daniel, ebullient and at ease with himself, is a Yale Divinity graduate and aspiring Lutheran pastor— worlds away from Chris’ strained history with God. Raised Baptist, when Chris thinks of the faith for which he was named, he remembers his father (Sasha Olinick) menacingly pulling out a belt and a conversion therapist (Joe Mallon) prying into and condemning his thoughts and desires. The contrast of Chris’ religious trauma with Daniel, who embodies a radical and affirming interpretation of God’s love, is at the heart of “In His Hands.” Barefoot and costumed in simple earthy neutrals designed by Moyenda Kulemeka, Daniel and Chris project innocence and virtue when compared with the collared button-downs and heavy shoes of Chris’ father and therapist. It’s little wonder that when Daniel and Chris discuss what Jesus looked like, they imagine him like Daniel with dark skin, curly hair, and thick lips, a parallel that grows richer in later scenes.

Directed by José Carrasquillo, the movement on stage is poised and purposeful, drawing on a number of inspirations including Jerzy Growtoski, the Polish Theatre Laboratory, Minji Park, Rauf Yasit, and Marlon Alves. The script by Benjamin Benne frequently breaks the fourth wall with a few quirky rhetorical devices. Both Chris and Daniel routinely expound lists for the audience—things in Chris’ apartment; types of logical fallacies; and favorite Mario Kart runs are all rattled off. Another oddity,both frequently “take inventory” of something, meaning to evaluate their thoughts and feelings on a topic. Altogether, Benjamin Benne has an uncommon narrative voice that heightens the surreal storytelling.

The psychedelic scenic design by Tony Cisek features a glossy black platform stage, encircled by concentric glowing borders, like a otherworldly portal or Chris’ conception of eternity—a snow globe inside a snow globe inside a snow globe. Lighting design by William K. D’Eugenio stands in for props, with overlapping pink and purple spotlights representing the candy bowl that draws Chris back to Daniel’s desk. While Sarah O’Halloran’s sound design guides scene transitions and adds to the magical unreality, some noises are simply spoken, like when Chris narrates “rustle, rustle” as he digs through the candies. Lighting, sound, and set design delightfully merge when Daniel and Chris play Mario Kart, with the familiar game music and sounds complemented by the borders around the stage flashing through the colors of Rainbow Road.

“In His Hands” brings compelling sensitivity to the queer community’s traumatic history with Christianity, and even those from other religious background can find something rich and moving inside this one-act play. With a title drawn from the spiritual, “He’s Got the Whole World In His Hands” and like the relationship between Chris and Daniel, this vision of God is gentle and loving. Playwright Benjamin Benne brings whimsy to this modern romance that helps balance the heavy baggage it carries. With bold and distinctive style, this play leaves you with plenty to ponder.