Theatre Review: ‘Mary-Kate Olsen is in Love’ at the Strand Theater Company 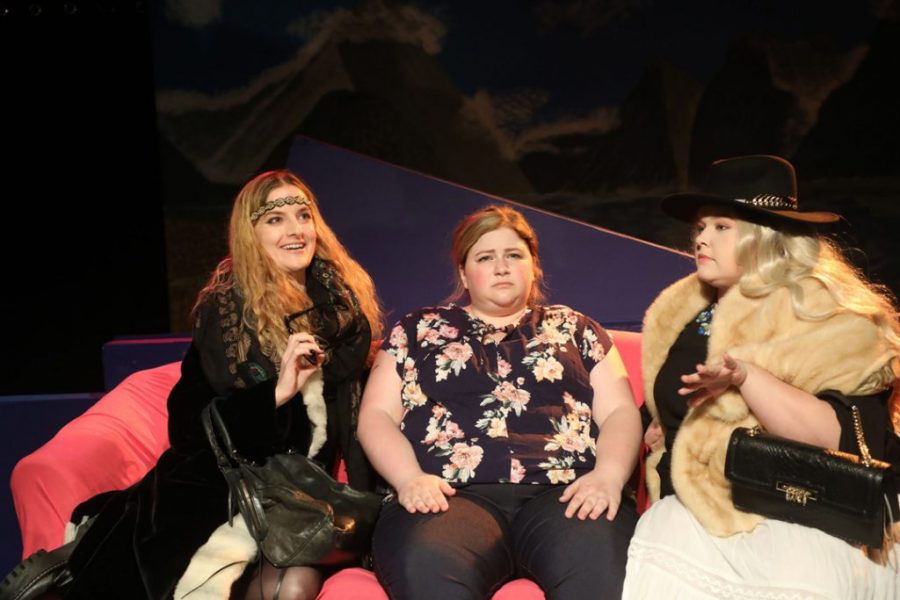 Before I entered the theater, I could hear the unmistakable opening of MGMT’s “Electric Feel” as part of the pre-show music and knew for certain that I was this show’s target audience. Born in the middle of the millennial generation and a class of 2010 grad, I am the “Mary-Kate and Ashley generation” and this show invites all of you to also encounter the trials, anxieties, and joys of being a woman in this era.

When can we as women ever just be “enough?” That’s the question the play asks but can’t satisfy. Women have to be breadwinners and community shakers. Gone are the days of waiting for men to make you a sex object—that’s our job now, too. Today’s woman is meant to be a CEO in the boardroom and a star in the bedroom.

…community theater at its best…

Mallery Avidon’s script takes us back to the early 2010s during a slowly recovering post-recession economy and the height of the “Girlboss” era. Grace (Alex Ade) is a 27 year-old woman in an unfulfilling job and stuck in a lifeless marriage to her high school sweetheart, Tyler (Nate Krimmel). Tyler has done nothing but play “Call of Duty” and smoke pot since he lost his job a few years ago. Ade plays the part with lovely naturalism well-suited to the blackbox. I feel bad for finding her actually quite pathetic for half of the show. Every day she comes home tired from work and looking for just a scrap of affection from Tyler who can barely glance up. Grace is everything a woman “should be”—she is married, has a house, and a good job, yet every night drifts off to the sound of the television as she sleeps alone on her bubblegum-pink couch.

That’s when she’s visited by Mark-Kate (Kaitlyn Fowler) and Ashley (Lanoree Blake) Olsen. As they make the change from childhood stars to adult celebrities, they realize that they “need a new demographic.” Cue Grace. The Olsen twins are here to fix everything. “There are a lot of broken people but you don’t have to be one,” suggests Ashley Olsen as she dives into the litany of pills and superficial fixes that can make your life better, including a pill that makes you want to sleep with your husband.

But before some “Pygmalion” transformation can occur, Mary-Kate confesses her feelings to Grace and convinces her to run away with her to the beaches of New Zealand. From the moment they leave the pink couch, the audience knows it is doomed romance. Grace isn’t simply confused about her feelings for Mary-Kate, she’s afraid of her whole sexuality, of wanting to want anything at all. There’s a lovely moment where the two sit drinking cocktails on the beach and Grace looks over at Mark-Kate with such love that we wonder if, maybe, Grace is finally starting to find some love for her own self too.

While Mary-Kate and Ashley try to lead Grace to be the best “Girlboss” that she can be, Tyler is mentored by the army soldier in “Call of Duty.” On stage right, we see a huge cut-out TV screen where Army Soldier (Dave Iden) makes kills and gently tries to guide Tyler to be at least the bare minimum of a husband. “All you have to do is pick up a little and say you love her, it’s a good deal if you can handle the emasculation.” Both Iden and Krimmel are fabulous actors and Iden brings an especially joyful physicality to the role.

Between the whimsical surrealism of our plighted couples are the Amazing Girls, a Greek chorus of sorts, made up of three high-school seniors (Emma Hooks, Joseph Mulhollen, and Mika J. Nakano). While it could be tempting to dismiss their anxieties as the frivolous whims of adolescence, they offer an element of anchored realism. You can’t be successful, hot, and have kids—or you can, but you’ll end up crazy. Our generation might not have it better than our parents. Though they’re hilarious, they remind us that most of us don’t have the privilege to run off and “find love and ourselves” in New Zealand.

Avidon’s script is zany, surreal, and still direct without managing to give us any easy answers. It could easily go off the walls but Emily Hall’s direction is smart, well-reigned, and simple. Her production team is excellent. This is an early 2010 period piece, make no mistake, and I LOVED it. Designer Kitt Crescenzo likely triggered PTSD from me and other millennials with her costuming (I see you, bolero cardigan) that paired perfectly with the props from Aniya Robinson (could there be any more early 2010s drink than the original Four Loko?) Brad Norris (Sets and Sound) took us seamlessly from Anywhere, USA to New Zealand and back with his clever but effective rotating platform. Great tunes and sound bytes from Mary-Kate and Ashley films took us from scene to scene and sent this millennial back in time.

This is community theater at its best and do we need it after the last few years. It’s clever and full of heart. These are actors, designers, and producers who have come out of the pandemic and decided to use the stage to have genuine conversations with their neighbors. I still don’t know what it means to be a woman in this century and I’m still afraid to let go of perfection, but I’m glad the Strand Theater Company is asking the questions.

“Mary-Kate Olsen is in Love” runs through June26, 2022 presented by Strand Theater Company, 5426 Harford Road, Baltimore MD 21214. For more information and tickets, go online. Proof of vaccination or a negative Covid-19 test within 48 hours of a performance, plus mask wearing is required for attendance.