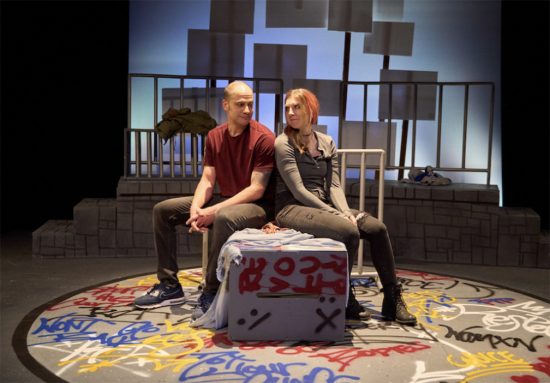 Maz (Emily Kester) is in Dublin for a protest urging the legalization of abortion in Ireland and Bricks (Jonathan Feuer) is on his way to collect his daughter for a day at the zoo. A chance meeting brings them together, changing the trajectory of their lives forever.

…theatre fans should make seeing this production a priority…

Carrying deep emotional scars, the two stumble through the day together and apart, attempting to do the things they hope will give their lives meaning and allow them to live with a past they can’t change. As the day’s disappointments accumulate, they share their stories in fits and starts. Bricks’ carelessness and immaturity threaten to end access to his young daughter, and Maz’s traumatic childhood has left her estranged from her mother and battling seemingly unresolvable anger. Together, they struggle to share their pain and take turns providing solace as this unlikely friendship sees them both revealing the dark secrets that brought them together on an ordinary day in Dublin.

A fairy tale ending would have this couple fall in love and ride off into the sunset to live happily ever after, but Irish theatre rarely provides an easy, forgettable ending. Instead, the story makes clear that a relationship need not be long-lasting or even particularly blissful to powerfully change us for the better.

Perfectly suited to their roles, Emily Kester (Maz) and Jonathan Feuer (Bricks) seem to have magically wandered off a Dublin street and into the theatre, unaware of the silent audience gathered to witness them struggle with their demons and each other. Kester embodies the angry, youthful activist at the same time as she reveals Maz’s sharp intellect, humor, and profoundly wounded soul. Feuer captures the multidimensional Bricks who, for all his poor decision-making, possesses a streak of compassion, the ability to change, and the self-awareness to know he is far from the person he wishes to be.

Written by award-winning Irish playwright, Eva O’Connor, and directed by Rex Daugherty, the set (scenic design by Nadir Bey) suggests a crowd of protesters, but with some simple adjustments, also becomes a Dublin pub, the Ha Penny Bridge, and a hospital bedside. At times, the dialogue is almost rap-like in its rhythm and pace. Following a dramatic development in the story, the two perform an exquisite dance (choreography by Ashleigh King), ballet-esque in its grace and emotive power.

When choosing from the region’s vast theatrical offerings this summer, theatre fans should make seeing this production a priority before “Maz & Bricks” wander back into the crowded streets of Dublin and disappear forever.