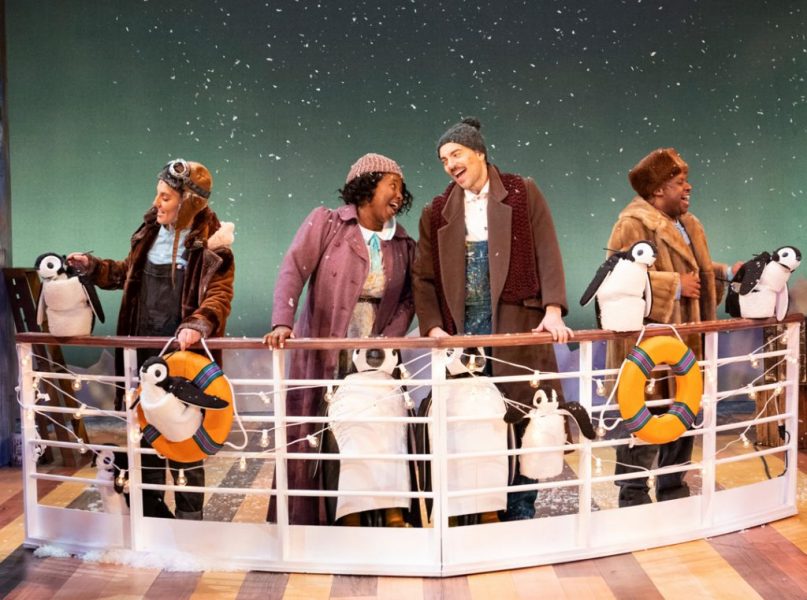 “Mr. Popper’s Penguins” is a based on the 1939 Newberry Honor book by Richard and Florence Atwater. Directed by Nathaniel P. Claridad (read MD Theatre Guide’s interview here), this musical version was written by Robert Kauzlaric, with music and lyrics by George Howe. It is a delightful story of how a house painter, with a passion for the Antarctic, came to own a family of penguins. Mr. Popper (Johnathan Atkinson) is the best painter and decorator in his small town during the Depression, but he and his wife (Edima Essien) struggle for money in the winter months when Mr. Popper cannot paint houses. He dreams of traveling the world and has a fondness for Antarctica and its webbed inhabitants.

…family-friendly, charming, and uplifting story with captivating props and performances.

After writing a letter to an explorer, Mr. Popper receives a surprise package in the mail—a penguin named Captain Cook. The Poppers embrace Captain Cook and soon are gifted another penguin, Greta. They take both into their home, despite the exorbitant costs of housing and feeding penguins in Massachusetts. As they stand in their snow-covered living room, the Poppers’ household gains ten more feathered members. This unusual family starts touring and performing around the United States in order to finance their growing chicks. The entrancing show dazzles Americans, but the Poppers decide to return the penguins to their native home for a more peaceful life. The show is set to numerous upbeat songs that will have you dancing along no matter how old you are.

The audience could not have been more delighted with puppets who waddled across the stage. Puppet designer and coach, Alex Vernon, stole the show with his captivating, lifelike creations. Vernon used a wheel to waddle their feet, which helped hide the puppeteering from the audience. It was at a level that allowed the penguins to blink and flap their wings, bringing them to life. The cast handled the penguins expertly as they acted with, and for, them. The set by Andrew Cohen and costumes by Ivania Stack were bright and warm, contrasting with the cold winter exterior.

The cast had effortless energy throughout the production, constantly cheering and engaging the audience. They showed immense range—from Mr. and Mrs. Popper’s empathy and determination in the face of financial struggles, to the two ensemble members—Sylvern Groomes Jr. and Karen Vincent—who each played upwards of five parts. They seamlessly switched from character to character, including puppeteering the penguins themselves. There wasn’t a person in that theater who wasn’t feeling cheerful as they left “Mr. Popper’s Penguins.”

If you need a show to make you smile, this is the show to see this summer. Chill out with “Mr. Popper’s Penguins” and enjoy a family-friendly, charming, and uplifting story with captivating props and performances.