Theatre Review: ‘Much Ado About Nothing’ at Chesapeake Shakespeare Company 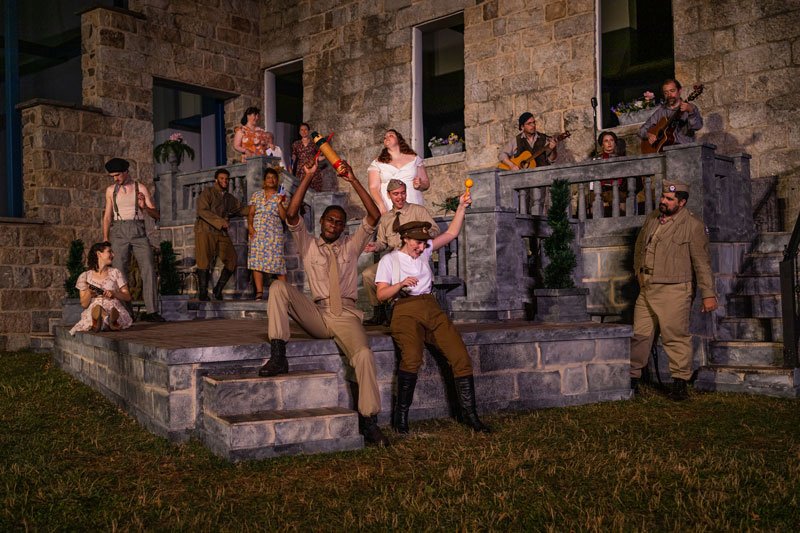 I have a confession to make. Despite holding an advanced degree in theatre, I still at times have absolutely no idea what I’m hearing when I listen to the Bard’s work. True, I can use context clues and the verse is soft on my ears, but often the poetry feels archaic and unattainable. For me, the measure of a strong production of Shakespeare is its ability to tell the story clearly even with the added language barrier. Set in the idilic ruins at PFI Historic Park in Ellicott City, Chesapeake Shakespeare Company’s production of “Much Ado About Nothing” hit the nail right on the head with stellar character work, insightful directorial interventions, live music, and gut-busting hilarity.

This version of the classic story is set during the liberation of Western Europe in late 1944, but with “an awareness of our own circumstances: isolation during the pandemic, the tragic war in Ukraine, and the political divisions here at home,” according to the director’s note. The plot follows closely to Shakespeare’s “Taming of the Shrew,” but forgoes the misogynistic compulsion for the man to emerge victorious over the woman. Benedick and Beatrice both overcome their pride and fall in love with each other as equals. As with many of the Bard’s comedies, the humor is driven by failed plots, conniving matchmakers, and character archetypes just absurd enough to provoke folly.

The laurels for this performance rest squarely on the shoulders of Dylan Arredondo as Benedick. His brash confidence, highly energetic character work, humorous delivery, and repartee with the audience all combined into a stellar rendition of a character that has been played by many a great actor. I have many favorite moments from the evenings revelries, like Benedick booing the other actors loudly from the back of the crowd. But the sequence that had me in stitches was when he attempted (and by all accounts grossly failed) secretly eavesdropping on his gossiping compatriots. Not to be outdone by any measure was Anna DiGiovanni as Beatrice (Read her ‘Quick 5’ interview here.) Her sharp wit, biting retorts, and sassy character contrasted with intense emotional vulnerability and grace. She moved me to tears in both laughter and sorrow, and still managed to leave room put those precocious men in their place.

Don John was reimagined as Madame Jean (Emily Erikson), inspired by the female soviet bomber pilots of World War II. Erickson’s force of character enlarged her presence and commanded attention. It’s not every day you find a performer who can maintain a Russian accent, speak in iambic pentameter, and still have the fortitude to deliver an energized and humorous physical performance. Sweet Hero, as played by Kate Forton, was charming and tragic. The actor also provided stellar vocal ability to many of the evenings songs. Jordan Brown, as Claudio, captured my heart on his first awkward and lovely hello to Hero, then broke it with his cruel misguided rejection of his love. Brown was soft with a razor’s edge, present and emotionally complex in his portrayal.

Leonata (Molly Moores) and Don Pedro (Ryan Tumulty) both leant maturity with a good sense of humor, piloting the matchmaking until they end up courting each other. Each actor brought a clear and honest portrayal of the people we expect to know best, yet who often misstep themselves. Jose Guzman was incomparable as the asanine Dogberry. Bursting with self-aggrandizement, tittering with procedure, and uproarious lewd conduct, he perfectly captured that bumbling character and stole the show through sheer force of will, and a few well-thrown grenades. Guzman was also amusingly contrasting in his other role as the artistic yet surprisingly scrappy Antonio. The complete ensemble was teeming with talent. Greta Boeringer (Friar/Sexton), Zach Brewster-Geisz (Verges), Casey Brogan (Second Watch), Jabari Williams (Borachio), B’Jion Wright (Ursula), Grace Friedman (Conrade, Understudy Ursula and Dogberry), Abigail Funk (Margaret), and Will Kinna (Balthasar/First Watch, Understudy Claudio & Benedick) brought the necessary energy, wit, and humor to their roles that anchored and guided the story wonderfully. Even if it was not clear to me at times what they were saying, it did not matter because I could tell that each performer knew the meaning behind their words (thanks to vocal and text coach Ben Lambert) and played their intentions sharply.

Director Séamus Miller’s conceptual interventions brought a paradoxical modern and vintage aesthetic.  The updated setting and cleverly embedded linguistic assertions propelled the universal themes in the play to an era that feels more accessible, and yet is not so modern to forgo a crucial sense of nostalgia. The story’s approach to romantic relationships, marriage, and gender roles might sit uncomfortably in our contemporary zeitgeist, but through viewing our characters from a well understood period of history, we are readily willing to accept these conservatisms. The entirety of the park was used, lending an immersive quality and allowing for all parts of the audience to glimpse the action (as the natural setting does account for some viewing challenges). Excellent physical comedy was utilized throughout, and each character’s movement was motivated and effective. Lauren Engler’s toe-tapping choreography illuminated the party scenes, while Shaquan Pearson’s intimacy coordination evoked all the tenderness and exuberance of young lovers in the throws of passion. The use of love songs from the era like “La Vie en Rose” or military morale jingles like “Boogie Woogie Bugle Boy” only enhanced the sense of time and place, and expertly covered scene transitions. Music Director Grace Srinivasan was wise to use jazzy harmonies and I must commend the whole cast in their intermission rendition of Woody Guthrie’s “All You Facist’s Bound to Lose.”

It actually took me until intermission to realize that the stone terrace and stairs on the stage were not part of the ruins. Such was the expert execution of Dan O’Brien’s set and lighting, which provided a simple and effective canvas that allowed for maximum playing space and reinforced the French summer villa vibes of the whole evening. Costumes by Lynly Saunders were period accurate and well constructed. The women’s pretty florals and flounces off-set the stark military uniforms worn by most of the men. The choice to include a cape as part of Dogberry’s constable uniform was inspired.

As I left the ruins, my cheeks still hurting from all that gaiety, I felt overjoyed to know that there is a commitment and passion to bring clear and accessible Shakespeare to audiences in Maryland. So many of us only ever experience Shakespeare’s words in the classroom, which by all accounts does not do justice to the foundation of English-speaking theatre. With the right interventions, there is breath yet for these old verses.

Running time: Approximately two hours and 20 minutes with one intermission.

“Much Ado About Nothing” by the Chesapeake Shakespeare Company will run Thursday-Sunday evenings, June 17–July 24, 2022 at the Patapsco Female Institute Historic Park, 3655 Church Road, Ellicott City, MD 21043. Parking is located at 3691 Sarah’s Lane, Ellicott City, MD, 21043. Gates open 90 minutes before curtain. You can bring your own picnic and there is an on site food option available as well. Every Sunday is Family Funday which includes pre-show activities. For every paid adult ticket, two children under 18 can get in free by reservation. Parking is available with a 1/5 mile walk from the parking lot located down the hill from the park. There is a drop-off spot at the top of the hill near the theatre and limited accessible parking. For tickets, call the box office at 410-244-8570, Tuesday – Friday from 10 am – 4 pm or go on online.