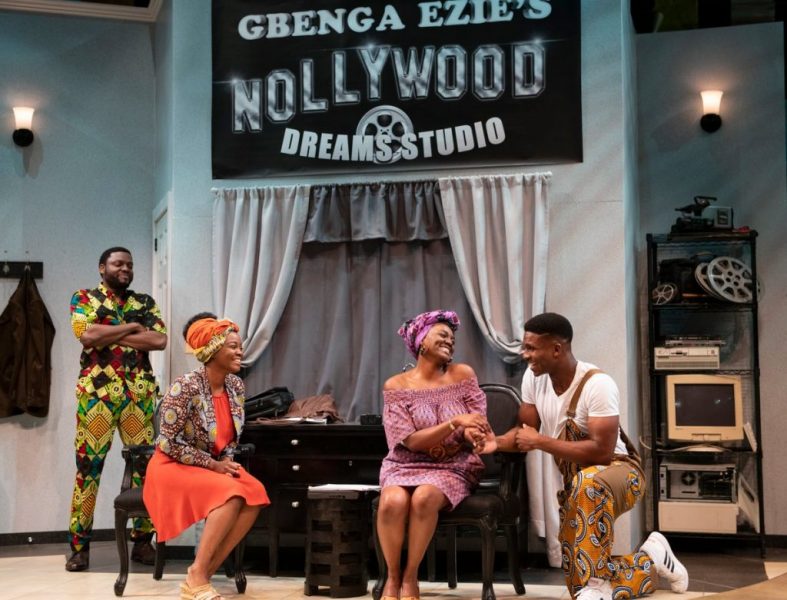 Currently at Round House Theatre in Bethesda, “Nollywood Dreams” is a delightful, feel-good telling of the familiar young-girl-makes-it-big-in-the-movies story set in a world that may be new to many in the audience. Writer Jocelyn Bioh introduces us to Ayamma (Ernaisja Curry), an optimistic young woman who has never been beyond the bounds of Lagos, where she works in her parents’ travel agency and dreams of making it big. She finds out about an open casting call being held by Nigeria’s hottest director, Gbenga Ezie, for his next blockbuster, and starts memorizing lines.

Anyone who has ever seen a film from Hollywood’s golden era knows how this story is going to turn out. There’s a handsome leading man who has a humble heart of gold, a conniving rival for the big part, and a few quickly handled impediments to Ayamma’s success. But “Nollywood Dreams” takes place not in California in the 1930s but in Lagos at the beginning of the booming Nigerian movie industry in the early 1990s.

Bioh’s characters are tropes by intention, and the exceptional cast leans in to the clichés. For theatre buffs, there’s nothing more fun than watching a talented actor like Curry portray bad acting. Ayamma’s first attempts at emoting bring to mind parodies of the worst student in the most introductory acting class. Renea S. Brown as older sister Dede is more cynical than her sister but also more starstruck, and it’s hilarious watching her jaded façade collapse when she meets Nollywood hunk, Wale Owusu, for whom she pines on an hourly basis.

Yetunde Felix-Ukwu has a tricky task as Fayola, the former child star who is the villain of the piece. Fayola is written as relentlessly ruthless throughout the first two-thirds of the play, so much so that when Bioh does try to give her some depth and context, it comes in one clunky and overly expository scene. Felix-Ukwu rises above the misstep in the text here.

Yao Dogbe creditably embodies Gbenga, who is both an earnest film artist and a somewhat flashy poseur. Joel Ashur is charming and sincere as Wale, but his is the play’s most underwritten character. He’s just a nice guy who happens to be a movie star.

The action plays out on a clever set by Jonathan Dahm Robertson that takes advantage of Round House’s revolving stage. We move between the sisters’ nondescript travel agency, Gbenga’s dubious headquarters (a sign proclaiming “Gbenga Ezie’s Nollywood Dreams Studio” is in stark contrast to just two framed certificates on the otherwise bare walls), and the set of “The Adinekeh Show.”

This third venue is a wise and fun touch by Bioh. Adinekeh, played exuberantly by Jacqueline Youm, hosts a popular daily chat show where she swoons over Nollywood’s elite. In gorgeous costumes by Brandee Mathies, Adinekeh gives off strong Oprah vibes (she even compares herself to Winfrey in an off-camera moment with Gbenga, hoping to follow her American inspiration into film herself). These interview segments allow for exposition, and the TV studio set lets the Round House audience serve as the studio audience, with Youm cajoling the crowd to join in the boisterous applause for each of her guests.

One of the play’s best moments comes at the very end, when we finally get to see the trailer for the new movie at the heart of the action. While the production values of the Nigerian film industry—the world’s second-largest, with more releases per year than the U.S.—have improved, in the early 1990s they were not great. This last bit also gives Felix-Ukwu a chance to prove that she is just as effective in being funny as in being nefarious.

“Nollywood Dreams,” which benefits from assured direction by Raymond O. Caldwell, is just a simple, cheerful, uplifting show. It has no pretensions beyond that, and that’s a very good thing. Sometimes we all just want a Hollywood ending—or a Nollywood one.

“Nollywood Dreams” runs through July 3, 2022 at Round House Theatre, 4545 East-West Highway, Bethesda 20814. Click here for tickets and information. NOTE: All patrons must wear masks and show proof of vaccination in order to attend a performance.