Theatre Review: ‘Once on This Island’ at Cockpit in Court Summer Theatre 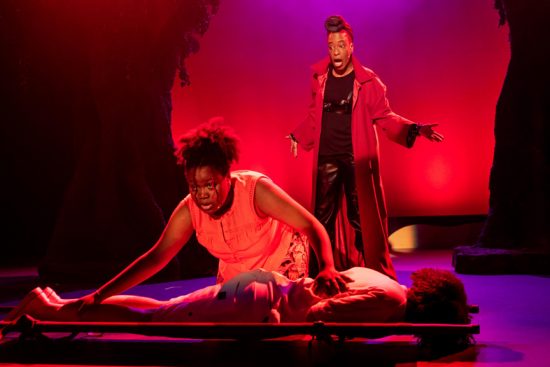 “Once on this Island” is a 1990 musical with music by Stephen Flaherty and book/lyrics by Lynn Ahrens—the writing team behind “Ragtime” and “Anastasia.” It is based on Rosa Guy’s “My Love, My Love, or the Peasant Girl” (1985), essentially a retelling of Hans Christian Anderson’s “The Little Mermaid” set in the French Antilles. Cockpit in Court is celebrating its 50th anniversary this year with a menu that also includes Disney’s “High School Musical,” “Sweet Charity,” and the plays, “Night Watch” and “Dot.”

…as close to perfection as theatre gets…a triumph of voice and staging.

“Once on this Island” uses a ritual storytelling style to reveal the journey of Ti Moune, first discovered in a tree by her adoptive parents, Mama Euralie and Ton Ton Julian. The musical accepts the presence of the divine in daily life as literal reality. Ti Moune was saved by the gods, therefore Agwe, the God of Water; Asaka, Mother of the Earth; Erzulie, the Goddess of Love; and Papa Ge, Demon of Death have a vested interest in her fate, observing and intervening in her life. When Ti Moune is a young woman, the gods decide to use her to test whether love or death is the stronger power in the world. Love is presented as Erzulie’s gift to Ti Moune in the form of the wealthy Daniel, who literally crashes into Ti Moune’s life after a car wreck. Death rears its power when Papa Ge comes to take his soul, thwarted only by Ti Moune’s offer to pledge her life for the boy she loves. Ti Moune then finds her way into the world of grands hommes, the rich descendants of the French planters and their slaves.

The supernatural presences, and the communities of the heavily segregated peasantry and wealthy, serve as dual-framing devices to explore the conflict between the practical realities of life and the pure innocence of faith and love. No one wants Ti Moune to even help Daniel when he crashes; Ton Ton covertly returns him to his grands hommes community. While they show, in turn, deep longing to be with her and some pity for the girl, Daniel and his promised bride, Andrea, have no illusions that Ti Moune has a permanent place in their world. Through it all, Ti Moune will not be assuaged, braving the long road to Daniel alone; caring for him through his long recovery; and even holding vigil outside the Hotel Beauxhomme where he is to be wed.

It’s a challenge in community theatre to find a full cast of strong singer/dancers, and somehow director/choreographer Tom Wyatt found them all. The players are are all so well cast that every voice uplifts the rich score, from Randi Seepersad’s smooth, flowing alto as Asaka to Tai Alexander’s power and fierce mezzo as Papa Ge. One of the highlights is how perfectly matched Josh Bowden’s (Daniel) vocals are with those of Nia Chavis (Ti Moune), a musical chemistry that makes them sound perfect for each other in a world that won’t allow it.

Nia Chavis is a star in every sense in this production. Her delivery of this writer’s favorite song, “Waiting for Life” is a masterwork of precision and emotional/vocal build that alone would make this show worth attending. Yet Chavis continues to impress throughout the evening, from her solo dance at Beauxhomme—made all the more poignant by Wyatt’s choice to stage it essentially in empty space, underscoring the scrutiny she faces at the hands of the well-to-do—to her fiery showdown with Alexander over Daniel’s life in “Forever Yours.”

Embracing the storytelling aesthetic, Wyatt’s staging is presentational and ensemble-driven. Most of the cast is on stage in one way or another throughout the show, with the watchful eyes of the god quartet, adoptive parents, and the ensemble of peasants or (literally) white-washed elites, witnessing Ti Moune’s journey. This allows subtle, interesting moments for the viewer. One cannot help but look to Alexander’s face when Damien Briscoe’s Ton Ton delivers a line about the gods “forgetting” or feeeling tense when Bowden’s Daniel rolls so far downstage that one fears he is going to fall into the open orchestra pit. Polished and energetic choreography is a constant, fueling celebrating songs such as “We Dance” and cautionary ones such as “Pray.”

Design is as lavish as is permitted in a show with so much group movement, but what is present fits the storytelling aesthetic well. The dual set designers, Sammy Jungwirth and Jason Randolph, achieve most locales with flats and scrims, silhouettes and cut-outs revealing storm effects, Caribbean canopies, and ballroom chandeliers. Three-dimensional units include the trees in which Ti Moune is originally found nesting high in the air during “One Small Girl,” or the gate that literally divides Ti Moune and Daniel during “The Wedding.”

Costuming (also by Wyatt) creates definitive contrasts between the elites in white and the peasantry in multi-color. Perhaps the most interesting touch is how the god quartet read like a variation on the peasants, with more robes and gold trim, suggesting the connection between the peasantry and the divine that the grands hommes lack. Lighting and sound designers Thomas P. Gardner and Toni Oliver provide flawless illustration and support for the musical storytelling. Gardner’s isolations and color transitions almost supply the themes of songs like “The Sad Tale of the Beauxhommes” on their own.  Oliver has an Athenian effort on her hands in balancing and amplifying such a wide variety of strong singers, and she achieves it without fail.

This is as close to perfection as theatre gets, with the only minor short-comings coming from perhaps that too much is being done by a limited selection of individuals. At times Wyatt’s direction gets noticeably repetitive, particularly in the dance movements and in some open-hand gestures that could be more character-specific. At others, a scenic element like the off-white back of Daniel’s bed or an overly cartoonish puppet seem out of place in the world. These stumbles are easily forgiven as the production drives forward to the bittersweet conclusion of Ti Moune’s tale.

“Once on this Island” is a triumph of voice and staging. It is a first-rate delivery of the Flaherty/Ahrens masterpiece and a first-rate start to Cockpit’s 50th anniversary summer season.

Running Time: Approximately one hour and 40 minutes including a 20-minute intermission.