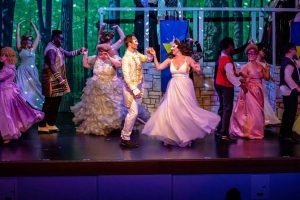 Rogers and Hammerstein’s “Cinderella” is being presented by Silhouette Stages. While the original book was by Oscar Hammerstein II, this is an updated version written by Douglas Carter Beane. Beane’s story, written for the first Broadway production in 2013, is still charming and delightful. The previous versions, 1957, 1965 and 1997, were written for television.

Produced by Ande Kolp and directed by TJ Lukacsina, this is a different “Cinderella,” than Hammerstein’s version which tried to be faithful to the fairy tale. Cinderella’s stepsister, Gabrielle (Hannah Elliot), is very sweet and the other stepsister, Charlotte (Marela Kay Minosa), is spoiled and picks on Cinderella (Baily Wolf) from time to time. The stepmother, Madame (Lauren Tobiason), is still cruel, but even she is occasionally pleasant. The Prince’s parents are no longer living and the glass slipper is not found by the Prince (Zac Brightbill) until almost at the end of Act II.

…a royal romp…a perfect production for children of all ages and the young at heart. Don’t miss it.

The two leading actors are the reason this production succeeds past expectations. Wolf has tremendous vocal ability, and her voice helps tell the tale and develop her character. Her rendition of “In My Own Little Corner” is outstanding.

The same is true of Brightbill who plays Prince Topher. All the young princesses in the audience, and there were dozens, looked totally smitten as Brightbill sang “Do I Love You Because You’re Beautiful?” Wolf and Brightbill blend together wonderfully when they sing “Ten Minutes Ago.”

Tobiason plays the villain so adeptly she got some boos from the kids in the crowd. The same can be said of Christopher Kabara in the newly written character for this adaption, Sebastian. Sebastian is sort of a Lord Chancellor and has been keeping the prince in the dark while he runs the kingdom with an iron fist.

The Fairy Godmother now has a dual role, both played by Amanda Jones. She is first Marie, a homeless woman, who is friends with Cinderella and later turns out to be Cinderella’s Fairy Godmother. With superb vocal ability, Jones sings two of the most memorable songs of the show— “Impossible/It’s Possible” and “There’s Music in You.” The latter was originally written for the movie,“Main Street to Broadway,” and was added in the 1997 television version.

Elliot as Gabrielle does a great deal with the role. She lets us know right away this is not a stepsister from the fairy tale but a kind and supportive sister. Gabrielle is in love with another new character, Jean-Michel, a local firebrand trying to save the country from Sebastian. Johnny Dunkerly portrays the unlikely rebel with just the right feeling to keep us rooting for his cause and for his relationship with Gabrielle to work out well.

Otega Okurume, another wonderful voice, does a remarkable job as Lord Pinkerton. Each of his reprises of “The Prince is Giving a Ball” is something to gleefully anticipate.

The standout of the supporting cast is Minosa as Charlotte. She is just the right mixture of cute and sassy and often the source of the humor. The audience roared at her rendition of “Stepsister’s Lament.”

Lukacsina’s direction is on the mark. You can believe the pumpkin turning into a coach and the puppets of the fox and raccoon are just plain adorable. Lukacsina seems to know this is a play that will be attended by many children and keeps everything light and the pace quick.

Rikki Lacewell’s choreography is creative, but she understands the dancing talents may be uneven in community productions. The performers are joyously animated but never look awkward or out of sync.

The set designer is Sammy Jungwirth, who according to the program is just 17.  I love the moving carriage and appreciate the pieces of the set on wheels which roll out quickly. They enable us to see mood changes as well as the changes in time and place. He does a wonderful job on the clock which is so important to the tale.

Deana Cruz-Conner designed the inventive costuming which allows Cinderella’s rags to turn into a gown before our eyes, not just once but twice. The other costumes are bright, attractive, and in period. The work of wig designer Tommy Malek is so creative, it helps put the finishing touches on the characters.

Music Director Paige Rammelkamp does justice to the orchestrations by Danny Troob and the musical adaptation and arrangements by David Chase. The lighting by Donald Chiarella and the sound by Alex Porter and Ethan Hogarty help convey the plot and enhance the set.

Silhouette Stages production of Rogers and Hammerstein’s “Cinderella’ is a royal romp. You will find all the characters most enchanting and the songs still memorable. If you know a child even as young as two or three, make sure you bring them along. This is a perfect production for children of all ages and the young at heart. Don’t miss it.