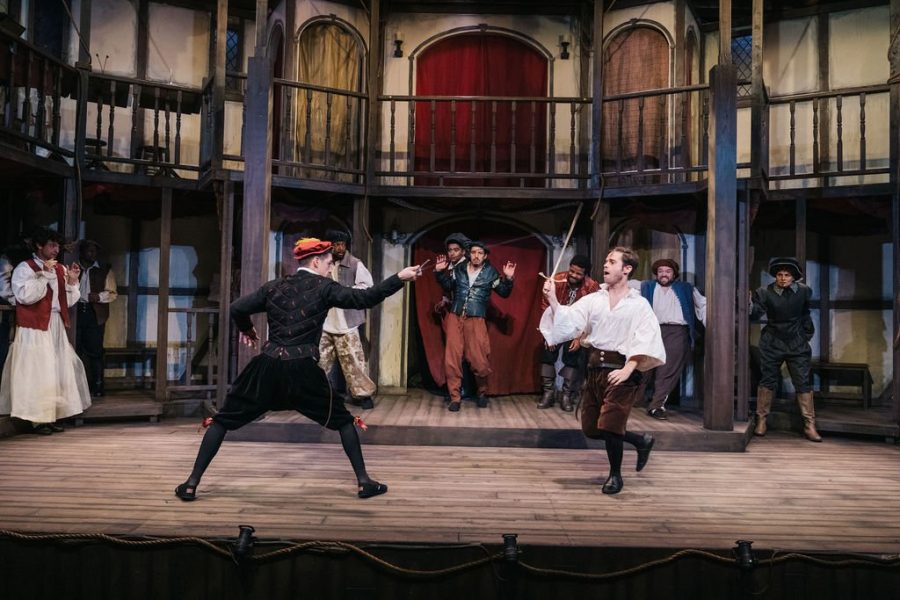 With four centuries passed, it seems likely there will be new versions of “Romeo And Juliet” for at least several centuries more. One example, “Shakespeare in Love,” imagines a William Shakespeare suffering writer’s block until a doomed romance with a poetry-loving maiden provides a new muse and inspires that famed play of star-crossed Veronese lovers. The 1998 rom-com film swept the box office and took home seven academy awards, including Best Picture. Unfortunately, the regional premiere at Keegan Theatre of the 2014 stage adaptation fails to capture that same level of magic. Although the technical design is high caliber, the production suffers from substantial inconsistencies.

Well-known references abound from the opening lines as Will Shakespeare (Terrance Fleming) struggles to write a sonnet, stuck on the first few words: “Shall I compare thee to…” Rival playwright and friend, Kit Marlowe (Duane Richards II), spoon-feeds Will the first stanza, making clear that Will needs new inspiration, especially considering he is behind on his commissioned comedy, “Romeo and Ethel, the Pirate’s Daughter.” Meanwhile, a wealthy merchant’s daughter, Viola de Lesseps (Ashley D. Nguyen), longs for poetry and love, inspiring her to audition for Romeo while disguised as a man—Thomas Kent—to evade the laws against women performing onstage. Struck by Mr. Kent’s beautiful recital of his words, Will sets off to find him. Instead, he is led to Viola’s house and encounters her protective Nurse (Karen Kelleher). From there, mistaken identity and star-crossed romance swirls, paralleling Shakespeare’s famous plays.

The slapstick direction of the production by Ricky Drummond and Douglas Dubois undercuts any suspense or emotion, even around darker moments of murder or sexual assault. “Shakespeare in Love” feels in need of more rehearsal time, especially in ensemble scenes where overlapping dialogue makes important lines sometimes difficult to distinguish. Simpler choreography by Douglas Dubois would have sufficed and kept attention on the plot during the ball where Will first meets Viola as her undisguised self. In contrast, ambitious fight choreography by Ryan Sellers was well executed by the central combatants—Will and Viola’s betrothed, Lord Wessex (Jon Townson).

The overacting in this production was so rife, it must have been purposeful. While the over-the-top delivery could suit the comedy, it needs more consistency. In her audition, Viola is tender and measured in her delivery, but in later rehearsals for “Romeo,” that nuance is lost, leaving one to wonder why Ned Allewyn (Taylor Witt), a historically-acclaimed London actor who impresses as Mercutio, would not be swapped in from his current casting. Lead actor Terrance Fleming as Shakespeare offers such a compelling performance, the exaggeration of the rest of the show seems out of step.

The technical design impressed, including the two-story set. Designed by Matthew J. Keenan and clearly inspired by the Globe Theatre, it charmed while delivering appropriate spaces for a queen’s reception, a balcony liaison, and of course, many rehearsals and performances. Elizabeth Morton’s costumes were sumptuous period pieces, with plentiful frills and petticoats. A ruff did fall off one actor mid-line, but that seemed so aligned with the general mayhem of the show that it might as well have been scripted. Lighting design by Venus Gulbranson proved competent and unobtrusive.

Perhaps some of the problems lie in the script, which was adapted directly from the 1998 film, lifting many of the same lines. As one character suggests, all audiences really want is comedy, love, and a bit with a dog, which is why “Romeo and Ethel, the Pirate’s Daughter (with a dog)” will be a hit! A piece of this formula that proves right is that audiences do love a dog. The tiny Spot (played by canine Lucas Wookiedog Hartwick) was a crowd favorite in each of his scenes. However, a few comedic bits either aged poorly or were always in bad taste, including jokes about women’s virginity, homoeroticism, and a stutter.

Somewhere, “Shakespeare in Love” went astray, delivering an uneven opening night. Individual technical elements succeeded and the play enticed plenty of laughs, but as a whole, it fell short of its source material. The ongoing pandemic has been especially hard on the performing arts and disrupted many other theaters rehearsal and performance schedules. Perhaps Keegan Theatre similarly contended with troubles backstage. Hopefully with more performances under their belt, “Shakespeare in Love” will settle into a more cohesive show.

Running Time: Two hours and 25 minutes with one 15-minute intermission.