Theatre Review: ‘Suddenly Last Summer’ and ‘Talk to Me Like the Rain and Let Me Listen’ at Avant Bard Theatre 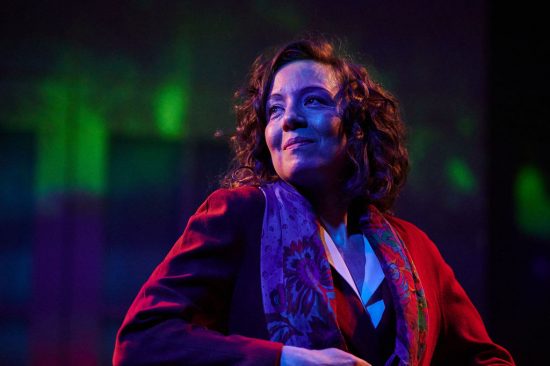 Nature is red in tooth and claw, the poem says, and that’s especially true in Avant Bard’s incredibly compelling new production of “Suddenly Last Summer,” directed by Christopher Henley. Produced in tandem with another Tennessee William one-act play, “Talk to Me Like the Rain and Let Me Listen,” the pair of stagings becomes a rich exploration of seething loneliness, undergirded by stellar performances.

…a rich exploration of seething loneliness, undergirded by stellar performances.

Acting as Prologue, “Talk to Me Like the Rain and Let Me Listen” is a minimalist story, featuring a man (Jonathan Del Palmer) and woman (Miss Kitty), unnamed. Kitty gives an especially fine performance, opening the show with a capella songs of sorrow and heartbreak. Eventually joined by the man, the couple’s conversation in a 1950s New York apartment explores alienation and hints obliquely at past violence—the man describes being “passed around like a dirty postcard.” Both Del Palmer and Kitty’s performances work to create an atmosphere of claustrophobia—the space seems too small for their emotions—but their expressions of desolation are softened by the clear intimacy between them. 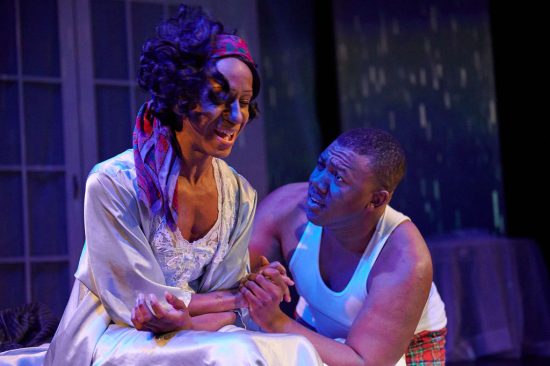 Miss Kitty and Jonathan Del Palmer in “Talk to Me Like the Rain and Let Me Listen” at Avant Bard. Photo by DJ Corey Photography.

That softness is sharpened to a knife’s edge in “Suddenly Last Summer,” a gorgeously vibrant horror story. William’s stage directions are read by a shadowy narrator, who describes a lush and dangerous-seeming garden, “inhabited by beasts.” The garden is now owned by Mrs. Violet Venable (Cam Magee), a society matron of 1930s New Orleans, and formerly owned by her son, Sebastian, who has died the previous summer. This is all explained to the clinical Dr. Cukrowicz (a chilling Matt Sparacino) starkly dressed in all-white.

The minimal set design by David Ghatan (we don’t see the garden that is described in the stage notes) allows the lushness and excess of Williams’ dialogue to be centered. At first, Violet waxes lyrical about her favorite subject—her son, his pursuits, and their travels together. Violet’s beliefs about her son are absolute, and often incredible, like the idea that he predicted his own death. “Poets are always clairvoyant,” she claims.

Magee is excellent as the grand matriarch, effortlessly selling the character’s imperiousness, making her sudden bouts of rage and canny cruelty seem even more vicious. Much of that rage is directed at Cathy (Sara Barker), Sebastian’s cousin, who was his traveling companion at the time of his death abroad. It becomes clear that Violet is engaged not only in safeguarding, but possibly manicuring, Sebastian’s legacy, and the story Cathy has been telling about his death threatens the enterprise.

Barker is superb as the vulnerable Cathy, who arrives to be interviewed by the Doctor. She emphasizes the woman’s fragility, as she seems to constantly dance on the edge of instability. This may be partly due to her recent distress, and the fact that she’s been institutionalized—a nun (Christine Hirrell) from the asylum shadows and polices her. A brief meeting with her mother (an excellent Megan Morgan) and brother (Jonathan Del Palmer) show a different side of her, but also makes clear that both her freedom, and the family fortunes, are on the line if she doesn’t tow Violet’s line.

Viciousness and vulnerability is a theme running throughout the story, something the sound design (by Clay Teunis) underscores by bringing in the noises of a tropical forest during times of dramatic tension or outrage onstage. The production keeps the tension and suspense high throughout the second half as Cathy’s story unfolds, and it becomes clearer who are the “beasts” and who are the prey.

Advisory from the theatre: This production is for mature audiences.

COVID health and safety: Patrons must show proof of vaccination or a negative test within the last 72 hours. All patrons are expected to wear masks. No concessions will be sold at performances.