Theatre Review: ‘Under the Sea with Dredgie McGee’ at 1st Stage Theatre 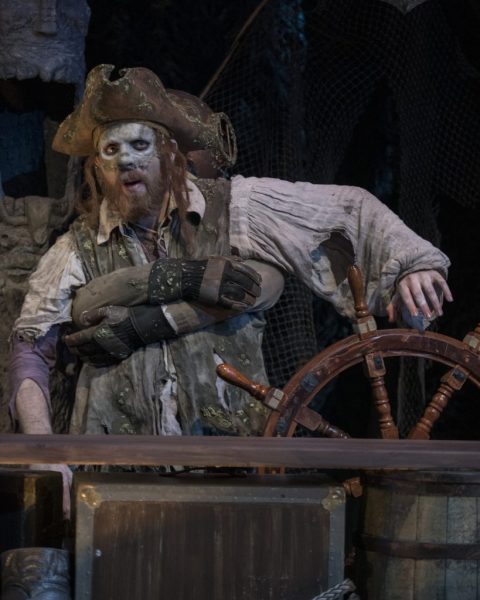 Matthew Aldwin McGee in “Under the Sea with Dredgie McGee” at 1st Stage. Photography by Teresa Castracane.

Dive into the aquatic world of “Under the Sea with Dredgie McGee” at 1st Stage. Upon entering the theater, you are greeted with music drifting across the venue. Guitar accompanies male singing and vocalizations, highly reminiscent of sea shanties. Blue tinted lights lead us into the depths of the ocean. Dark, decaying algae covers the walls. A ramshackle stage is decorated with the salvages from a shipwreck—mermaids, a steering wheel, and a cannon to the side. A window in the rear of the ship is adorned with kelp drapes. However, the set is cheerful and well looked after. Starfish and seashells add pops of color to the wooden deck. The intimate setting of the theater and audience participation leaves patrons feeling as though they are cast members as well.

With quick-witted, self-aware humor, this show is perfect for adults and kids.

“Under the Sea with Dredgie McGee” is an underwater variety show hosted by Dredgie. His show features various aquatic acts, from an octopus magician and his starfish assistant, to the musical trio the Siren Sisters. There is even a puppet performing a puppetry segment. Dredgie’s show is endearing as the flawless, puppet-based characters stumble through their acts. I was particularly impressed with the ease that the ensemble portrayed various emotions through puppetry—anger, embarrassment, pride—some without uttering a single word. The ensemble vies for fame and fight amongst themselves, leaving Dredgie to wrangle them in. The rag-tag cast on Dredgie’s show instantly won the hearts of the audience who could not stop laughing. With quick-witted, self-aware humor, this show is perfect for adults and kids. The variety show is set to lovely original music with a smattering of pop culture references, such as “Died in Your Arms” by Cutting Crew.

Then, of course, there are the unscheduled interruptions. Dredgie reads Sea mail from stranded voyagers. He meets a genie who immerses him in a dream sequence and a sea witch who is working through her anger issues. Beneath the hilarity is a touching story of redemption. Towards the end of Act 1, we learn how Dredgie came to live at the bottom of the ocean. His selfish actions hurt the people he cares about most—both in the past and the present. Dredgie self-reflects with the help of a magical, musical friend who helps him see that his missing legs are not the reason he doesn’t feel whole. Dredgie states, “it’s so hard to sail forward when you’re holding on the anchors of your past.” This prompts the finale of the show where Dredgie attempts to sacrifice himself in order to right his wrongs. In doing so, he is bestowed the honor of Keeper of the Ocean. “Under the Sea with Dredgie McGee” balances the comedy of a variety show, where everything goes wrong, and the deeper themes of finding your inner truth. The characters learn the power of spoken words and the value of the light you can bring to others. Sail along with Dredgie’s crew on their hilarious misadventures that will have the whole family smiling.

“Under the Sea” was written and directed by Matthew Aldwin McGee, with El Chelito as Associate Director. McGee is also the founder of the two-time, Jim Henson Foundation grant-winning production company, Matt-a-Magical. The award-winning company designed all the puppets in this show and the craftsmanship Matt-a-Magical put into their creations is undeniable. “Under the Sea” utilized multiple forms of puppetry to allow for unique and intriguing characters to shine. It showcases finger puppets, shadow puppets, hand puppets, and larger-than-life inflatable puppets. The ensemble seamlessly brought this wide range of characters to life. The production features about 24 characters, yet it is performed by an intimate cast of six. Matthew Adlwin McGee stars in the titular role. He is accompanied by Natalie Cutcher as Hexikalina and Suzy Alden, Linda Bard, Ezinne Elele, Lee Gerstenhaber, and Jacob Yeh as the ensemble. The entire cast utilized incredible vocal range and technique to embody their characters. A special nod to Jacob Yeh who was my personal favorite and always made me smile.

1st Stage has grown from a grassroots company to nationally-acclaimed theatre in under 15 years. The welcoming and intimate setting, along with the dedication from the entire company, makes it one to keep an eye on. Go see “Under the Sea” before it closes!

Running time: Approximately 2 hours and 30 minutes with one intermission.

“Under the Sea with Dredgie McGee” runs through June 20, 2022, presented by 1st  Stage Theatre1, 1524 Spring Hill Road, Tysons, VA 22102. For more information and tickets, go online. All 1st Stage staff, performers, and audience members are required to be masked at all times while in the theater. Proof of vaccination will be checked at the door.