‘A Quick 5’ with Renea Brown, Actor in ‘A Midsummer Night’s Dream’ at Folger Theatre 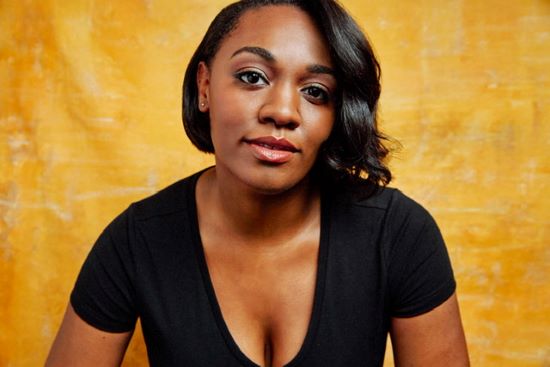 Shakespeare fans can be happy this summer. The Folger Theatre is back with live performances and built a theater from the ground up inside the majestic Great Hall of DC’s National Building Museum. (Read the press release about the construction here.) Folger Theatre chose the perfect play, one of Shakespeare’s best comedies, “A Midsummer Night’s Dream,” and also perfect for the season. This production is directed by Victor Malana Maog with a fine creative team: Tony Cisek (Scenic Design), Olivera Gajic (Costume Design), Yael Lubetzky (Lighting Design), Brandon Wolcott (Sound Design and Original Music), Alexandra Beller (Choreographer), and Chelsea Pace (Intimacy Choreographer).

“A Midsummer Night’s Dream” is a story about two sets of young lovers. The King of the Fairies, Oberon, and the fairy Puck spread mischief and magical fairy dust in the forest and the four lovers have the most memorable, mixed-up romances. It is all wonderful fun as everything gets sorted out while the Queen of the Fairies, Titania, is also a victim of this mischief. She find herself in love with Bottom, one of the tradesman rehearsing a play. He, shall we say, makes a total a*s of himself.

I’m from Lexington, Kentucky, home to the Wildcats Basketball team, bourbon, and horses. Now I live in New York and Washington, DC. I am a huge Shakespeare nerd; lemons are my favorite fruit; and I’ve had a total of 16 pets!

“A Midsummer Night’s Dream” might be Shakespeare’s most beloved and most-performed comedy. How will you set your Helena apart?

I don’t think I’m trying to make my Helena distinct, as much as I am trying to tell her truth, which I will say is more complex than what I have seen in the past. She is always two things at once—insecure and confident; envious and giving; loyal and conniving, in pain and a bit of a masochist. My goal is to play all of her colors as best I can.

Helena is involved in a love triangle. Do you think her unwavering love for Demetrius is admirable or a flaw in her character from a modern perspective?

Again, I think it’s both. We’re complicated beings and I think to a modern audience, she looks desperate and thirsty. But she believes that love still exists between her and Demetrius, so why not go after it? I also think because the show is a comedy, we as an audience find her persistence admirable and encourage her to keep going after what she wants. We want her to win the same way we want Hermia and Lysander to win; the same way we want the mechanicals to put on a show, good or bad; and the same way we want Titania and Oberon to put away their differences and reunite.

The Folger is a local D.C. landmark for those who love Shakespeare. Is performing there a special experience?

I will say I’ve always wanted to perform at the Folger, but with the renovation happening, performing at the National Building Museum has exceeded that. This is HUGE, literally. The timing is impeccable; having the performance at the museum; with Folger now under the artistic direction of Karen Ann Daniels and working with (director) Victor— all are very special. Even more so, “Midsummer” was the first play I performed. I was nine and played a fairy covered in painted glitter which my parents obviously loved! To come full circle at the Folger playing Helena, a role I’ve wanted to step into for years, is the highlight of my year.

You have played a variety of Shakespearean roles. Is there one you would like to perform that you haven’t yet? (It can be a traditionally male role.)

Obviously, I want to play Hamlet. I think that’s a given for most actors. But I also want to play Tamora in “Titus Andronicus” and Emilia in “Othello.” Of course, both of these women might seem like odd pursuits for a woman to play, but I think that adds a layer of complexity to the plays that’s interesting for me and would be for an audience. What can I say? I’m a sucker for convolution.

Shakespeare’s “A Midsummer Night’s Dream” runs through August 28, 2022, presented by The Folger Theatre at The Playhouse at the National Building Museum, 401 F St NW, Washington, DC 20001. The admission price will include a life-sized immersive installation based on Joanna Robson’s pop-up book “A Knavish Lad;” costume displays; face-painting; scavenger hunts; and Shakespeare Mad Libs. There are other special events including a pay-what-you-can-performance on July 12; a pre-performance conversation with the Folger Director, Michael Whitmore at 6:30 pm on July 12; and a Stage Director’s Talk on July 14 at 6:30pm, “Building the Dream: Setting the Stage for “A Midsummer Night’s Dream on July 18 at 6:30 pm. There will be two poetry workshops on July 22 and August 5 at 6:00 pm; a post-show discussion on August 4; “Spotlight on Design: Renovation of the Folger” on August 8 at 6:30 pm; and finally, “Brews & Banter Pre-Show Talk” on August 12 at 6:30 pm. An open-captioned performance will be held on August 14 at 7 pm. Check their website for information and for additional extras. For tickets, go to this link.