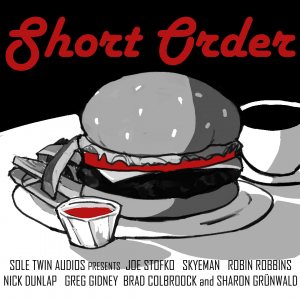 Many of us travel to vacation destinations during the summer months. Audio plays are a wonderful way to pass the time, and two excellent, full-cast audio dramas from Sole Twin Audios fit the bill. “Short Order” is an exciting drama, somewhat in the style of film noir, and “2462” is a dystopian view of the world’s future. Both are recreations of classic radio plays from the long-running classic series, “Suspense.”

…food for both the ear and the mind…ideal for listening during a summer road trip to your favorite holiday destination.

”Short Order” includes brilliant re-creations of the sounds of a fast food, casual restaurant in the 1940s, complete with bells which ring when customers enter, small paper ketchup containers on the tables, and a talkative short order cook. A customer with a severely disfigured face (expertly portrayed by Robin Robbins, who even imbues lines like “lots of ketchup” with menace) suddenly becomes a regular. The man exudes such a malevolent presence that business at the restaurant drops off considerably.  Meanwhile, bad luck intrudes more and more in the home life of the restaurant’s owner, Mr. Bailey (convincingly acted by Joe Stofko). Is the worrisome customer somehow connected with Mr. Bailey’s troubles at home? If so, how?

“Short Order” is compelling for what the episode’s producer-director, Rachel Pulliam, describes as “general creepiness.” What makes the show truly memorable are audio designer J.S. Farrington’s sound effects. The original broadcast of this show was heard on August 16, 1945, one day after the end of World War II. This recreation makes listeners feel as if they have been magically transported back in time some 77 years, helping us feel what “creepy” felt like to our parents and grandparents.

While “Short Order” reminds us of the American past, the play “2462” (first released sixty years ago, in 1962), brings us into a dystopian future of the year 2462. The world of 2462 is highly organized but has no room for poetry and the arts. This troubles the main character, whose name is 108303715. (In this world, a combined serial, social, and telephone number is imprinted on one’s forehead at birth.) 108303715 is arrested for writing poetry or—more correctly—for trying to be a poet, rather than being something useful like a scientist or engineer.

This highly literate script was written especially for “Suspense” by George Bamber. The production is somewhat reminiscent of the “Twilight Zone,” a similarly venturesome television show of that era. The sensitive and unassuming poet is wonderfully played by Robin Robbins—the very same voice actor who plays the menacing, disfigured stranger in “Short Order.” Another actor of note for this new production, is Dean T. Moody, who movingly plays a character called “The Old Guard,” another person for whom the charms of poetry have not been lost in the austere world of the year 2462.

“2462” is forward-looking in terms of its social critique, going so far as to describe the late twentieth-century as “the days when men still believed crime was cured by punishment.” Retro-future charm abounds as government bureaucrats at the Space Department type on “electrowriters” and computers of the future are still presented as big, cumbersome machines using punch-cards.

Each of these Sole Twin Audios productions is highly recommended. “Short Order” is a noir thriller which recreates the ambiance of the 1940s, while “2462” is a moving and thoughtful science fiction production warning us of what could happen if we prize technology and pure utility over poetry, art, and beauty. They are food for both the ear and the mind, and ideal for listening during a summer road trip to your favorite holiday destination.