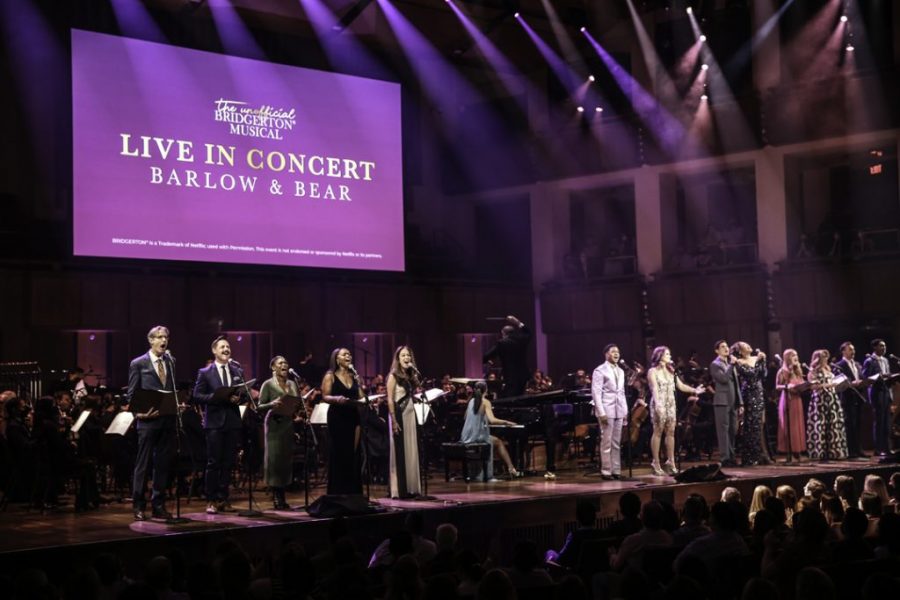 For the first time, live and in concert, Abigail Barlow and Emily Bear presented their, “The Unofficial Bridgerton Musical.” It based on the popular, Netflix series “Bridgerton” at the Kennedy Center along with a cast of star-studded, special guests. The concert was accompanied by the exquisite National Symphony Orchestra, conducted by Steven Reineke. This concert was directed by Sammi Cannold and featured orchestrations by Tim Davies.

All the performers gave an unforgettable performances.

Since its premiere in December 2020, the Netflix series, “Bridgerton,”  adapted from Julia Quinn’s novel “The Duke and I,” has captivated audiences worldwide. Set in regency-era England, the story follows the whirlwind romance of Daphne Bridgerton and Simon Basset. The show provided an escape from the grim realities of the COVID-19 pandemic for many viewers, who were drawn into the fantasy world. Full of romance, scandal, gossip, and beautiful dresses, “Bridgerton” quickly became a sensation. The success of the show lead to a second season and now there is a third season in production. After the pandemic restrictions were lifted, the widespread popularity also led to the development of the interactive performance, “A Bridgerton Experience,” in several major cities where guests attended a ball in the style of the series.

In early 2021, the pandemic forced fans to wait. Two such fans, dear reader, were none other than Abigail Barlow and Emily Bear. “The Unofficial Bridgerton Musical” began with a simple question: What if “Bridgerton” was a musical? Thus began the phenomena of the TikTok musical. Barlow and Bear created “Ocean Away,” originally called “Daphne’s Song,” which quickly went viral. The duo then wrote and composed fifteen songs in just six weeks. Their album, “The Unofficial Bridgerton Musical,” skyrocketed to #1 on iTunes U.S. Pop Albums within the first two hours of its release. It won the 2022 Grammy Award for Best Musical Theatre Album—the youngest winners in the category’s history.

The sold-out concert was attended by enthusiastic fans, some of whom joined in on the fun by dressing up in Regency-era dresses. There was a tangible feeling of excitement as the audience roared at Barlow and Bear’s entrance. The duo expressed their gratitude for the opportunity to present this concert live for the first time. Bear detailed her awe that a year ago she and Barlow were writing their songs from their living rooms as the world followed along on TikTok. From that moment she dreamed of hearing her songs played by a full orchestra.

Barlow and Bear have done a masterful job creating songs that perfectly related the themes of the shows to their own experiences. The song, “Penelope Featherington,” described a young perfectionist who could not bear to let anyone down—a woman who struggles under the judgmental gaze of society. How can you find love if you do not look or act the way the world says you are meant to? Penelope struggles as the wallflower of the series, often overlooked and ridiculed by her family and the boy she loves, Colin Bridgerton. The song opens by giving the audience a glimpse of her inner monologue. Penelope describes herself as “never as thin, never as perfect” continuing by divulging that she does not think she will ever deserve love because of her perceived shortcomings. Barlow and Bear have given Penelope the space to share her doubts—doubts that many audience members can relate to. Their willingness to share their vulnerabilities is undoubtedly one of the reasons Barlow and Bear have found such success.

“The Unofficial Bridgerton Musical” also world premiered two, never-before-heard songs. First was the finished version of “Fool For You,” which was performed by Jason Gotay and Solea Pfeiffer. Barlow revealed that they felt that they could not help but finish this song after so many fans pleaded to hear the ending. Then they debuted “Secrets, Secrets” following the theme of secrecy. The song showcased an enthralling, five-part harmony that left the audience in awe.

All the performers gave an unforgettable performances. Kelli O’Hara pulled on the audience’s heartstrings as she portrayed a mother struggling to watch her children leave. No one dared breathe as Emmy Raver-Lampman sang in “Entertain Me” as the conflicted Queen. Masking her loneliness with drugs and gossip, the Queen laments her husband’s sickness. Why have all the power in the world if it can’t give her the one thing she truly wants? Of course, Ephraim Sykes smoldered as The Duke of Hastings. Even the conductor found moments of play as he joked with Bear and Barlow between songs. There was not a single person in the audience who was not happy to be there, and I suspect the cast felt the same way as well.

“The Unofficial Bridgerton Musical” became a viral sensation and skyrocketed to fame because of the ingenuity and creativity displayed by the writers.

Running time: 75 minutes with no intermission.