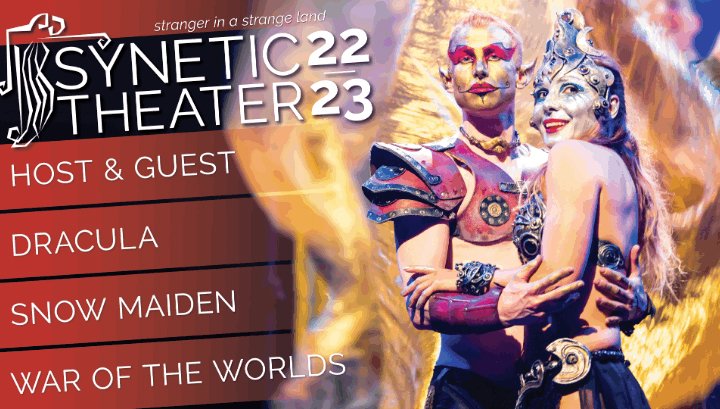 “Synetic is thrilled to share the 2022–2023 season, which explores ‘otherness’ and our relationships to those who are different. When I first came to this country as a refugee, I did not speak the language; it was disorienting but also magical. No matter where you come from, I think we all know what it’s like to feel different or to fear that which we do not understand. But we also know that feeling of awe and wonder that comes from discovering something new and different. This season captures the incredible breadth and complexity of those feelings in a way that is both timeless and timely.”

Synetic Theater will present four full-length performances this season. These wordless works will be performed by area artists and will include music, physical theater and acrobatics. Our productions transcend language and cultural boundaries and can be enjoyed by speakers of all languages. Want to see every show? Become a member and save on tickets while supporting Synetic Theater!

Host & Guest is a Synetic classic based on a Georgian epic poem that tells the ancient story of a family who takes in a lost stranger to discover he is from an enemy clan, and their valiant attempt to save him when their village wreaks vengeance. Performed around the world, Host & Guest is a timely and relevant tale of war, strife, the beliefs that tear us apart, and the humanity that brings us together. Host & Guestis imbued “with an almost cinematic vitality” (The Washington Post).

Blood-sucking temptresses, creeping mists, and a chill up your spine…Bram Stoker’s Dracula rises again in Synetic’s bold and bloody adaptation of the world’s most iconic horror story. This sensuous and terrifying thriller arrives just in time for Halloween.

Based on a 19th-century folk tale and created by Helen Hayes Award-winning choreographer and Synetic Co-Founder Irina Tsikurishvili, Snow Maiden is a story of love, hope, and the transformative power of dreams.

In a world premiere, Synetic Theater brings its stunning and immersive style to H.G. Wells’ renowned novel of devastation and faith in the midst of catastrophe. This multimedia fusion of acrobatics, music, and movement makes us question who we are and what is truly worth fighting for.

Synetic redefines theater by blending innovative techniques and movement, investing in artists’ growth, and creating unforgettable visceral experiences for any audience. Our productions are one-of-a-kind and unlike anything you will see elsewhere in the world. Synetic rose to fame for presenting “silent Shakespeare” adaptations and now presents 4-5 productions per year in the Washington D.C. area, both wordless and text-based. Synetic is named for its synthesis of dynamic art forms. More about us.