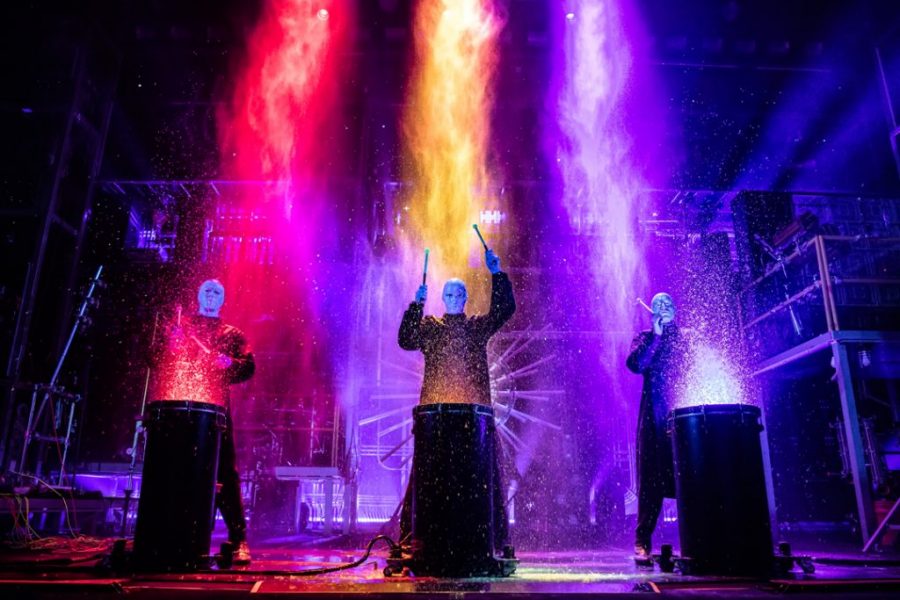 Blue Man Group is, as the Kennedy Center website says, a “phenomenon.” Created in New York in 1987, Blue Man Group has performed for more than 35 million people on multiple continents, with permanent shows in several cities and several touring companies.

…very talented physical artists, expert in both broad clowning and in getting laughs with subtle facial reactions.

At the very start of the current Kennedy Center production—which takes place on a set that looks like the innards of a late-1990s computer PCU—it was clear that many in the crowd had seen Blue Man Group before. There was cheering and whooping before anything even happened, and the mood throughout the 80-minute performance was more like a concert than a theatrical event. Audience members frequently shouted out and signaled to the performers. I quickly came to feel that all those folks were in something that I was not.

Blue Man Group is technically impressive, with perfectly synched sound and movement, bright primary colors, and clever effects. The three Blue Men on stage (there are four in this traveling troupe, and there’s no way to know which one did not appear) are very talented physical artists, expert in both broad clowning and in getting laughs with subtle facial reactions.

But while it’s fun to watch—the only word for some of the visual stunts is “cool”—Blue Man Group feels soulless. It’s a corporate commodity of a show, with scads of style but almost no emotion. The best silent clowning invokes feeling, with the audience coming to empathize with the hapless fool set before it. There’s none of that here. The Blue Men do make occasional stabs at character, but it is always rapidly subsumed by a shift to the next “cool” thing.

There were also moments that were just uncomfortable. Audience interaction was mostly voluntary, but sometimes skirted lines of intimacy standards. Some in the house were touched without consent, and the person I attended with was gently prodded by one of the Blue Men to join him in feeling the hair of a stranger in the next row. (She demurred.)

Blue Man Group is like a Las Vegas show—all pizzazz and no pathos. It’s a frothy soda of an experience, a burst of sensory sensation in the moment that is ultimately unfulfilling.

Blue Man Group runs through July 31, 2022 at the John F. Kennedy Center for the Performing Arts, 2700 F Street NW, Washington 20566. For tickets and information, click here. NOTE: All patrons must wear masks and show proof of vaccination in order to attend a performance.