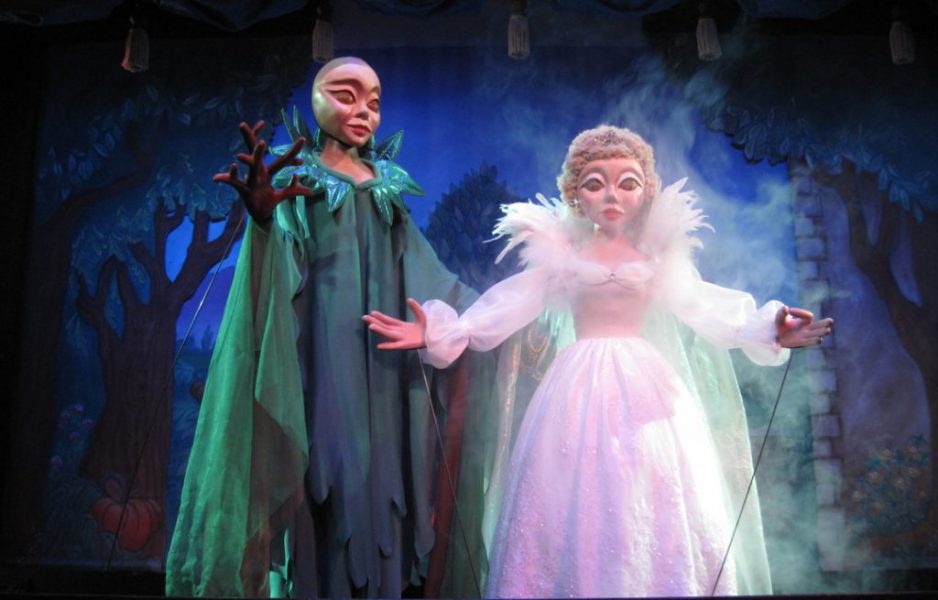 One day a prince was out disguised as a hunter. He found himself hungry and knocked on the door of a home in which a girl, who appeared to be a household servant covered in dust, kindly shared her breakfast with him. He mentioned there would be a big ball at the palace that evening and that he might see her there. Such is one scene from the current production of “Cinderella” at The Puppet Co. Here and elsewhere in the production, the story has been expanded in creative ways, adding unfamiliar scenes to the story. The effect is that we are almost experiencing the story anew.

…a wonderful choice to keep ‘Cinderella’ true to the romantic spirit of the original story…highly recommend parents bring their children to see this production.

This latest production of the Puppet Co. is an excellent recreation of a show written and designed by Christopher Piper, founder of this resident marionette troupe at Glen Echo Park. It contains many hallmarks of the Piper method including the use of classical music (the “Barcarolle” from Jacques Offenbach’s “Tales of Hoffmann” is heard, for instance) and loyalty to the original source material. In this latter vein, there is a reference to a horrific moment in the Grimm fairy tale version of “Cinderella,” in which her wicked step-mother hands one of her own daughters a knife when the famous slipper is too small and dainty to fit.  She says in the original, “Cut the toe off, for when you are queen, you will have no more need to walk on foot.” Yet this is told in passing as a joke in this version so as not to upset children.

Despite an expanded storyline and other unique choices, there are also familiar visual allusions to Disney’s “Cinderella” which children will appreciate as well. For example, the pumpkin is turned into a Rococo-style coach and a mouse becomes a horse. All of this is achieved with the use of special effects that have traditional charm but which are also innovative.

The production has a sleek and handsome look and the puppets sparkle beautifully—such as the wicked stepmother decked out in seventeenth-century high fashion and the father dressed as a cavalier. A special moment is the costumed ball when the puppets wear exquisite masks. The color coordination is also a wonder to behold. In the scene in which Cinderella and the prince in disguise are discussing breakfast, the brown tones of the puppet costumes and kitchen and orange pumpkin in the corner all coordinate beautifully. This is also a pleasing aesthetic as the clock strikes midnight and Cinderella, in her silver dress, is presented against a blue background.

A nice detail also emerges when Cinderella begins to assert herself against the cruel treatment of her stepmother and stepsisters, even before the prince rescues her from her impossibly bleak situation. In this version, the lead character is called Ella. It is her stepmother who cruelly names her Cinderella or “Ella of the Cinders,” reminding us of the classic comic strip “Ella Cinders.”

The Puppet Co. is known for a modern take on fairy tales with a refreshing and irreverent attitude. Yet in the production, it was a wonderful choice to keep “Cinderella” true to the romantic spirit of the original story. The show’s success is due especially to the efforts of Bridgid Wallace as Cinderella, Penny Russell as the Fairy Godmother, and Kristina Hopkins as the Stepmother. The show is directed by Liz Dapo (also Understudy) and assistant director Dillon Mitcham. I highly recommend parents bring their children to see this production.