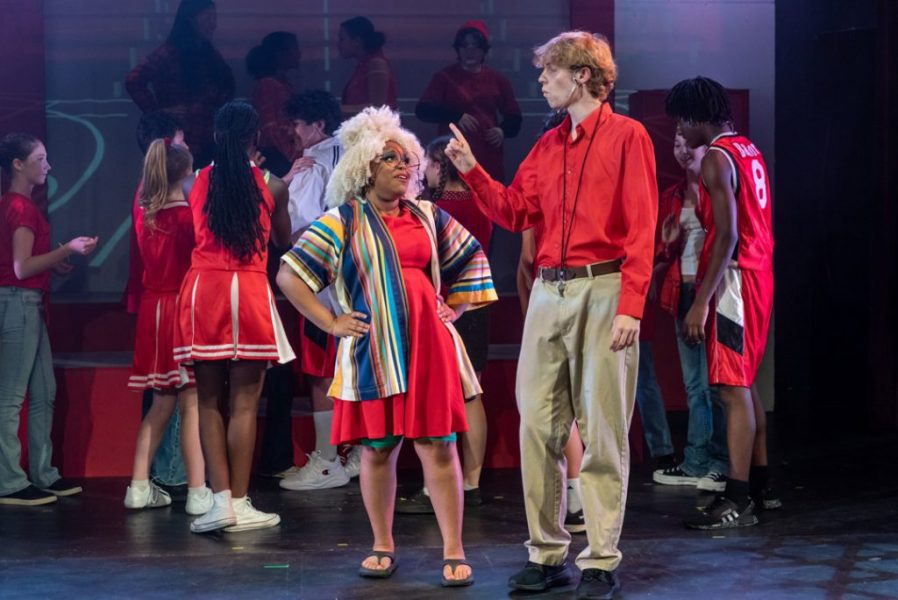 A crowd full of excited summer campers was the perfect audience for “Disney’s High School Musical,” presented by Cockpit in Court Royal Jesters. Before the show started, the MC got the crowd ready, encouraging clapping and laughing along with the show. This audience participation continued as cheerleaders raced down the stairs to open the musical.

…great for kids of all ages…

Garbiella Montez (Jaiden Shaw) and Troy Bolton (Shahmeer Mirza) meet at karaoke during winter break. But surprise—Gabriella moves to Albuquerque after break and transfers to East High School. Given that she’s a brainiac, she joins the Scholastic Decathlon while Troy is captain of the basketball team.

When theatre teacher Ms. Darbus (Katresse (Clover) Wellons) announces auditions for “Juliet and Romeo,” Gabriella is hesitant to audition (after all, can a brainiac be a thespian?), but Troy offers to sing with her. Alas, they’re too late. But when Ms. Darbus hears the couple’s duet, she gives them a callback.

Enter Sharpay Evans (Bella Comotto) who has been star of every show since kindergarten. She’s furious when she sees she has competition. Troy’s teammates on the Wildcats basketball team are shocked that Troy has auditioned—he’s a basketball player, not a singer—so they trick him into believing Gabriella no longer wants to be in the show. However, they realize their mistake and decide to support Troy.

But is it too late? The Scholastic Decathlon, championship basketball game, and callbacks are ALL scheduled for 3 pm. The Brainiacs and Basketball Players come up with a plan to turn off the power long enough for Gabriella and Troy to audition. After all, they’re all in this together.

This show is great for kids of all ages since there were plenty of songs from the Disney musical, heroes (Gabriella and Troy), and a villain (Sharpay), a little comedy (in the form of Ms. Darbus and her outrageous outfits), and even some kind of moral from all of this. You don’t have to stick to the stuff you know. It’s ok for the brainiac to sing or for the jock to bake. We also see that Coach Bolton is proud of his son’s singing talent as well as his prowess in basketball and doesn’t want anyone to stop him from anything he wants to do. As for Sharpay, well, she wonders who she is if she’s not the star but realizes people will like her (or dislike her) regardless.

The many songs in the musical are repeated at the end of the show so kids (and parents) can join in on the fun. Shaw and Mirza do an amazing job harmonizing on their duets. Particularly impressive is a stage full of basketball players dribbling balls simultaneously while dancing. These actors definitely have their ‘head in the game.’

Cockpit in Court Summer Theatre is celebrating its 50th anniversary this year. Along with “High School Musical,” the season includes “Sweet Charity,” a musical about an unflappable woman seeking love in 1960s New York City, and “Dot,” a hilarious play which grapples with aging parents and midlife crises.

Running time: Two hours and 15 minutes with one intermission.

“Disney’s High School Musical” runs through July 17, 2022 at Cockpit in Court’s Summer Theatre, CCBC Essex, 7201 Rossville Blvd, 21237. For information and tickets, go to this link. Masks are required for all patrons.