Theatre Review: ‘Do it Now!’ at Fells Point Corner Theatre 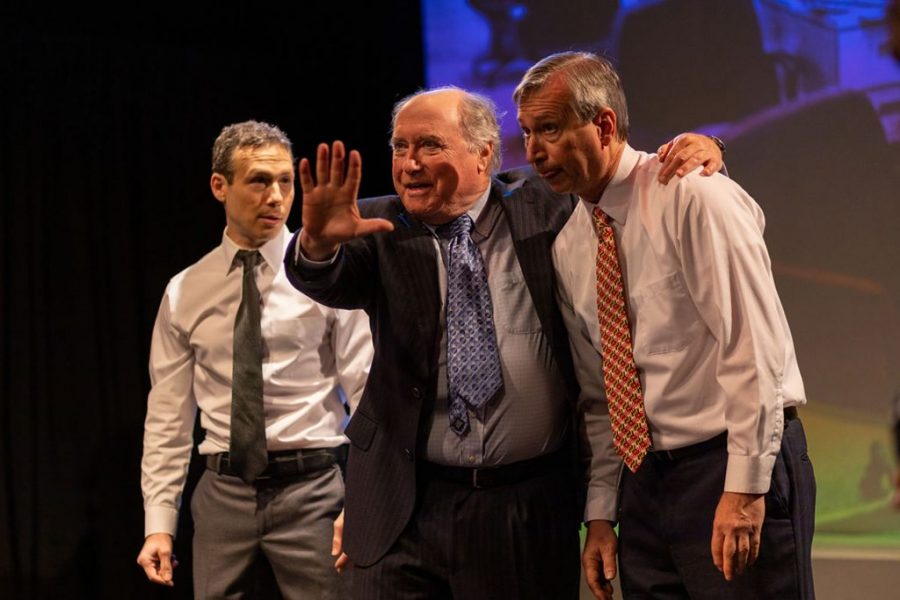 Andrew Grossman, John Covaleskie as William Donald Schaefer, and Paul Ballard in “Do It Now!” Photo by Kiirstn Pagan.

William Donald Schaefer’s signature phrase “Do it Now!” is the appropriately-titled, new musical based on his time as the four-term mayor of Baltimore City. It’s not surprising that this production, a partnership with the Baltimore Playwright’s Festival and Fells Point Corner Theatre (FPCT), was sold out before it even opened. There is nothing more “Bawlamer” than this colorful, can-do mayor who really believed in his city (“I Believe in Baltimore”) and put it in the national spotlight in a positive way.

…a clever and fun show with a memorable score.

Directed and choreographed by Timoth David Copney (who would have happily found a way to get it on stage ten years ago), this is clearly a labor of love for all involved. Currently the chair of the Baltimore Playwright’s Festival, Copney was finally able to green light the project.

Rich Espey wrote the book and is the co-lyricist with composer, Jonathan Jensen, a bassist with the BSO. Espey also plays a very funny Hyman Pressman, the city comptroller (a colorful character in his own right who fancied himself a poet). Jensen is the music director and a special nod goes to his musicians.

Schaefer, a lawyer turned politician, held office for over 50 years as a member of the city council, then its president, mayor, governor, and finally state comptroller. This show begins when, as city council president, he decides to run for mayor. It ends in 1987, after 16 years in office, and as he is about to run for governor. The musical feels a bit like an operetta. There is has a nice blend of a classic Broadway sound, jazz, vaudeville, doo wop, and 70s soul, with clever lyrics that move the story along. The plot consists of some of the highlights and lows during Schaefer’s tenure.

As he walks around a blighted inner harbor on New Year’s Eve with his girlfriend, Schaefer sees big possibilities. They meet Bonnie (a wonderful Vanessa Kinzey), a New Yorker lost in Baltimore and none too impressed. He takes her to his mother’s for the night. When her husband’s job brings her to Baltimore, she becomes Schaefer’s invaluable girl Friday. (A bonus was that the real Bonnie was in attendance on opening night.)

Schaefer was a tough taskmaster with a volatile temperament but could also be generous and kind, according to people who knew him best. His most publicized successes were Harborplace, making Baltimore a destination (now sadly declined but there is renewed hope with a new developer), and when he swam with the seals in the new (but not quite completed) National Aquarium after losing a bet. Among the other things that he helped get done were the Maryland Science Center, The Baltimore Convention Center, The Baltimore World Trade Center, and pushing the construction of Oriole Park and the new football stadium. This prompted many publications to call him America’s best mayor. He sparked development all around the harbor that continues to this day.

Schaefer also felt the small things could make a difference like taking care of potholes, abandoned cars, and trash. He drove around the city before he came to the office and then tasked his people to fix it—now. He encouraged his team to come up with ideas to solve problems. Remember “Trash Ball” which tried to deal with the trash problem in a fun way? Then there were $1 homes to revitalize vacant houses and neighborhoods (an idea that has been mentioned as a solution to that lingering issue today.) “Pink Positive Day” was a way his people tried to cheer Schaefer up after an obnoxious Robert Irsay (an excellent job by Mitch Fishbein) snuck the Colts football team out of town one wintry night. The show highlights some of Schaefer’s quirks, like the fact that he never could tie his tie correctly.

The talented cast plays multiple characters and all have strong, impressive voices. Wendy Baird is perfect as both Schaefer’s mother, with whom he lived until her death, and long-suffering lady friend, Ella Jane Krantz (based on Schaefer’s longtime girlfriend, Hilda Mae Snoops). Ed and Bertha Rutkowski (Paul Ballard and Adele Russell, great as the annoying ex-neighbors) keep telling Schaefer he should move to the county. Darren McGregor does a fabulous turn as the businessman and kingmaker (and later, cheerfully goes to jail for racketeering) who helps “Shakey” become mayor. Though not a Baltimorean, John Covaleskie has big shoes to fill and he captures Schaefer without turning him into a caricature—he even looks a bit like him. The cast also includes Anthony Case as Dan, another of the mayor’s assistants and Andrew Grossman as Old White Guy, both taking on various roles.

But there is an important thread—represented by the always incredible Keith Snipes (James/Murray) and Kay-Megan Washington (Dorothy/Carol)—woven into the successes throughout the musical with “two Baltimores.” They remind us that many felt that Schaefer could have done more for the Black community. (Sadlyy, no mayor since has been able to completely solve some of the complex and deep-seated issues that persist today.)

Washington also plays Carol, one of Schaefer’s three female assistants that include Kinzey and Joan D’Adamo as Jean Mazol. The trio sings a fabulous doo wop-style song, “Schaefer’s Girls.” To get things done, Schaefer allowed his people to be creative in order to accomplish them and didn’t care how. This got him in trouble when the newspapers accused him of having a shadow government. While entertaining, the song references the popular radio show “The Shadow,” complete with the iconic cape and hat, but it felt a little out of place.

The set is simple but very effective. There is a small platform with two steps in front of a large screen at the back and two, tall vertical screens in the front on either side of the stage (now a beautifully renovated, black box). Projections of historic photos of Baltimore and the interiors, like Schaefer’s office, are perfect, capturing the time period (and will bring back memories for some). Actors come on and off stage behind curtains that line either side of the stage. There is a small bit of a physical set with Tululu’s home. Costume design by April Forrer fits the 70s and 80s eras (including the recreation of the “Buster Keaton” outfit Schaefer wore while swimming with the seals) and added color and depth to the production.

Copney does an excellent job moving the actors around on stage and keeping the pace going. The actors did a solid job with the choreography (there were some small blips that can be attributed to opening night jitters.) Though the show felt like it should have ended in a bigger way, it did bring a little tear to my eye.

If you are lucky enough to have a ticket, “Do It Now!” is a clever and fun show with a memorable score. Love him or hate him—and no doubt he made mistakes and could have done more—Schaefer implemented big dreams and projects that left a huge imprint on the city he loved so much.

“Do It Now!” runs through July 31, 2022 at Fells Point Corner Theatre, 251 S. Ann Street, Baltimore, MD 21231. This production is fully sold out. An in-person (only) wait list will open one hour before showtime and any unused or returned seats will be offered on a first-come first-served basis to those present and waiting in the lobby. Signing up on the standby list does not guarantee that a seat will become available. For more information, call 410-878-0228 or click here.  Note: Proof of Vaccination or a negative PCR test (72 hours) is required for entry for all patrons over 12 years old. Masking is required at all times while in the building.