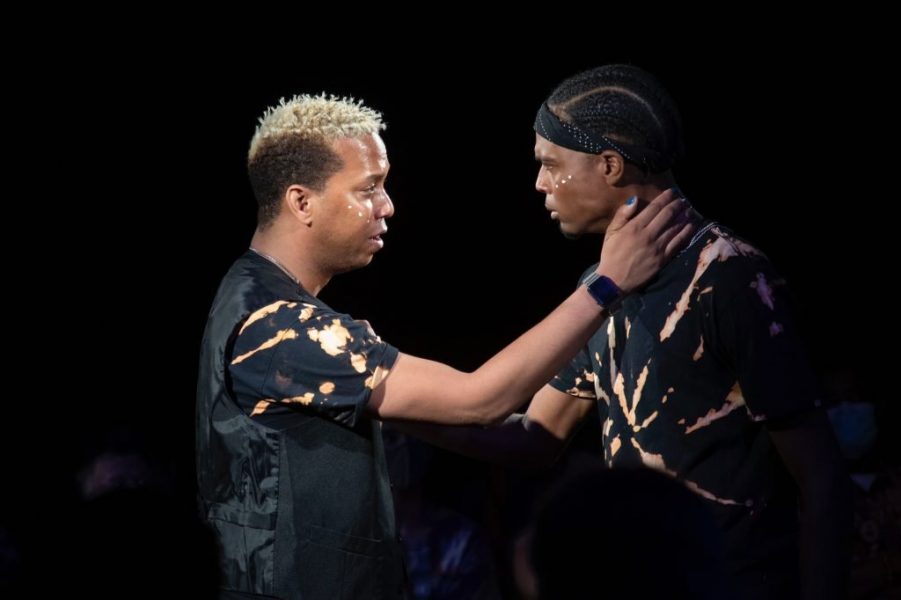 JC Payne as Brutus and Quincy Vicks as Cassius. Photo by Shealyn Jae.

Beginning in 2018, the Baltimore group Fools and Madmen has created a marvelous series of hip-hop adaptations of Shakespeare’s works. Their unique distillations are designed for a traveling format, in which scenery is eliminated and technical elements are sparse. The money, instead, goes to casting, as FAM has consistently managed to recruit top performers for their projects.

This month, the troupe returns to Motor House with a bold and rousing “Julius Caesar.” Company members Joshua C. Thomas and Caitlin Carbone Hernandez have boiled down the story, choosing to center on the relationship between Cassius and Brutus. Thomas also provides original songs, delivered by the actors and a pair of live musicians. The show is pure fire. Director Mari Andrea Travis packs eight actors into a ten-by-sixteen-foot space, fully surrounded by audience, and they fill it with urgency and energy. JC Payne as Brutus and Quincy Vicks as Cassius are in full command, starting with an original prologue in which Vicks evokes Gil Scott-Heron and Payne dares us to make a ride-or-die commitment with him. At that point, we launch into bits and pieces of the original text, interspersed with contemporary rap treatment. The juxtaposition of language carries surprisingly well. it’s kind of the point, in fact. The effect is powerful in its reach and hits the bullseye with its message. If ever there were a time to have a national discussion about what happens when the powerful become too much so, this is it and FAM’s “Caesar” is an excellent conversation-starter.

There’s little to discuss in terms of production design here. Lighting, uncredited in the program, is very basic and highly effective, needing only a few instruments to cover the small performance area. Scenery, as mentioned, is nonexistent. Costumes, by director Travis (with help from Rache Austin, Tiffany Ginyard, and Lauren Bell), are both stylized and straightforward. Romans are clad in black jeans, matching tie-dye shirts, high-top sneakers, and decorated vests. Caesar gets an upgrade befitting his rank, including an opulent cape whose red lining serves a vital visual purpose in the play.

It’s the actors who carry this production. Travis’ direction smartly recognizes the all-star nature of her ensemble, and gives them lots of room to strut their stuff. For starters, Quincy Vicks and JC Payne are both dazzling. Payne gives Brutus the expected moral backbone, while making the character’s inner struggles painfully honest. Vicks’ Cassius is certainly “lean and hungry,” and Vicks cranks up the tension at every opportunity. He never goes overboard, though. When the time comes for cracks to appear, the inevitable fall is as gut-wrenching as it is steep. Antony is powerfully performed by Brandon Rashad Butts and Noah Silas gives the title character a delightfully outsized level of bombast. Jha’Neal Blue and Lauren Erica Jackson do great work as Calpurnia and Portia respectively, and the pair of Tyrel Brown as Cinna and Adrian Graham-Chesnavage as Decius absolutely sparkle in providing comic relief.

The band consists of Trevor Shipley on guitar and Joel Santiago on percussion. They’re first rate, backing Thomas’ original songs as well as providing underscoring that layers the stage action perfectly. Speaking of music, it has to be said that the actors in this ensemble are excellent rappers. Vicks and Blue are standouts, but everyone gets a turn and nobody disappoints. Thomas’ epic rap battle which precedes Shakespeare’s Battle of Philippi may be the highlight of the show. Fight choreography by Brad Norris works its way in when things get physical. Jalice Corral (an apt name for a stage manager) keeps a large number of moving parts humming along.

This “Caesar” is a compact, yet breathtaking production. It’s a very short engagement, so, run don’t walk to order tickets.