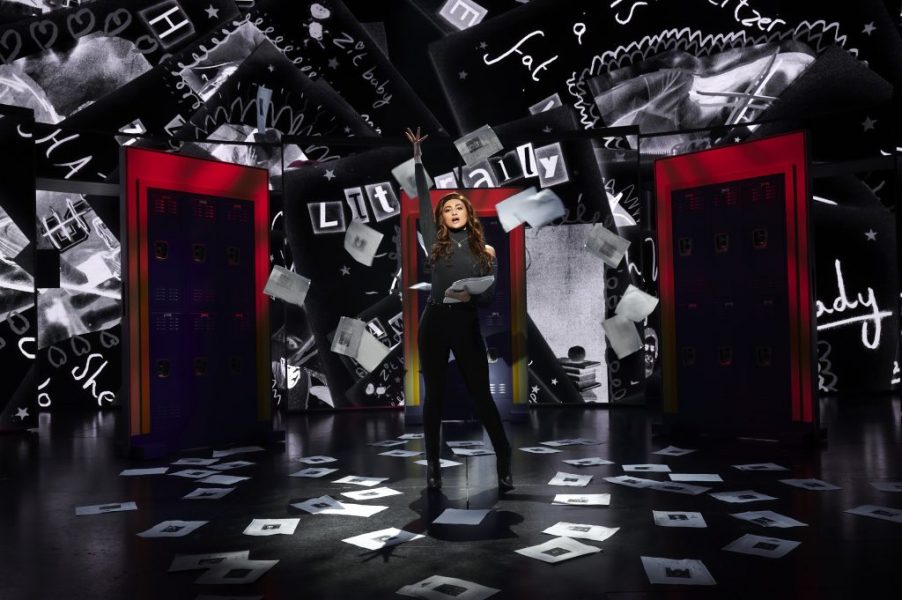 With a few notable exceptions, the 21st century has been a bit of a dry spell when it comes to new Broadway musicals. Still, the beast must be fed, and a popular method for creating new income from old material has been the stage adaptation of old, non-musical movies. Mel Brooks, ever the pioneer, was first with “The Producers,” a 2001 musical based on his under-appreciated first film from thirty-odd years before. Our own John Waters reached 14 years deep into his catalog for 2002’s “Hairspray.” Both were hits, and like the snake that eats itself tail-first, both stage musicals became movies of their own a handful of years later.

…heady stuff…about the fragility and cruelty of teenagers.

Tina Fey, whom we know from “Saturday Night Live” and “30 Rock,” joined the parade in 2017. Her 2004 film “Mean Girls,” a fictionalization of Rosalind Wiseman’s book “Queen Bees and Wannabes,” served as fodder. Nell Benjamin and Jeff Richmond added songs to Fey’s own book, and Casey Nicholaw directed. The musical was a hit, and an upcoming film adaptation was announced just before the COVID pandemic. This movie is still in the works while the stage musical is on tour.

The story centers on Cady Heron (English Bernhardt), a formerly home-schooled, American teen from Kenya, who is the new girl at North Shore High School in Evanston, Illinois. The titular characters are a predatory clique consisting of Regina George (Nadina Hassan), Gretchen (Jasmine Rogers), and Karen (Morgan Ashley Bryant). Regina and her obsequious gal pals somehow take a liking to Cady, which surprises her new friends Janis (Lindsay Heather Pearce) and Damian (Eric Huffman). Janis has an axe to grind with Regina, and when a social betrayal arouses Cady’s suspicions, she agrees to a sycophantic plot to overthrow Regina in a palace coup. The ‘et tu?’ moment comes when Gretchen and Karen defer to Cady to decide whether Regina is to be permitted a seat at their cafeteria table. As Cady gains power, she is, predictably, corrupted by it. Teen angst and dance numbers ensue. Someone is hit by a bus. There is an exultant victory for the mathletes and other outsiders. All are reconciled, as Cady humbles herself by distributing broken pieces of her tiara to the student body.

It’s all heady stuff, really, about the fragility and cruelty of teenagers, in a large auditorium packed with middle-aged theater-goers who were reminded, for an evening, that we haven’t completely outgrown those things. A channel-surfer’s glance at the ongoing January 6th hearings may make one wonder if anybody ever does.

Running Time: Two hours and 28 minutes with one intermission.

Advisories: Some profanity and haze.

“Mean Girls” runs through July 17, 2022 at the Hippodrome Theatre at the France-Merrick Performing Arts Center, 12 N. Eutaw Street. Baltimore 21201. Tickets are available for purchase online. Note: Patrons are required to wear masks in the theater.