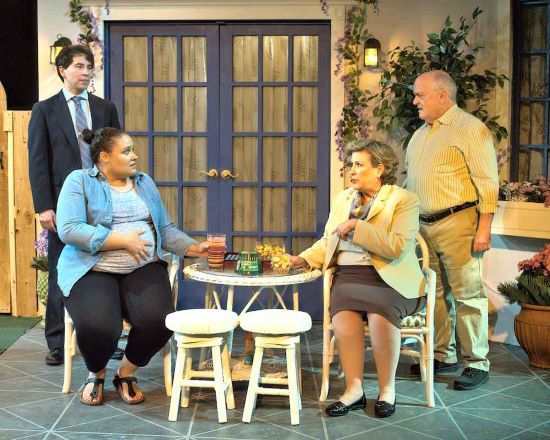 Sometimes, less is more. “Native Gardens,” a comedy by Karen Zacarías is a perfect example. Currently playing at Silver Spring Stage, it has a small cast (only four members have any dialogue), one set, and takes place over a few days. It makes some very strong points about conflict and conflict resolution.

…humorous and optimistic… a ‘blooming’ success.

Virginia and Frank Butley (Sarah Holt and Scott Holden) are an older, White couple, financially stable and close to retirement. They have lived in an established, upper-class neighborhood (which appears to be Washington, DC but it could be anywhere) for years. Frank loves to work in his small yard and has been trying to win the local award for best garden. Ginny, as she likes to be called, has risen fairly high as a government contractor, sometimes struggling because she is a woman. They have an unmarried son who is lives on his own.

Pablo and Tania Del Valle (Chris Galindo and Alexandra Bailey) have just moved into the house next door. Pablo is a Chilean immigrant just starting out at a prestigious law firm. Tania is from New Mexico, with an Hispanic background. She is working on her dissertation and quite pregnant.

Frank and Tania have very contrasting ideas about gardening, but they all agree that the ugly old steel wire fence separating the two yards needs to be replaced by a more attractive wooden one. When Pablo and Tania find out that the property lines for their yard actually extend into the Butley’s, including Frank’s beloved garden, tempers rise and the differences of the two couples are magnified. The plot centers around how the couples deal with their conflicts, if they can compromise, and ultimately live in harmony.

Galindo gives an impressive performance as Pablo. He can go from a meek husband and employee to a demanding neighbor, and, at times, spouse. Bailey’s Tania is very strong individual, but her performance adds a softness that an expectant mother might have, wanting to make a good environment for her child. It is Tania, not Pablo, who tries to mend fences.

Holt captures the powerful Ginny who may have been the one at work who had to compromise and get along with her male counterparts. At home, she is on her own turf and is quick to stand up for her husband and their property. As Frank, Holden also allows us to empathize with this aging government worker who has become almost compulsive about his garden.

Matt Ripa’s direction is brisk, but he allows his actors to develop. The blocking is perfection for this unusual stage and I could see and hear everything. All the actors have great chemistry. We never doubt they are two married couples who, in their own way, still in love with each other.

Leigh K. Rawls’ set may be the real star here and one of the best I’ve seen. She, along with Master Carpenter Douglas Becker, have created two distinct backyards. There are facades of both houses, each distinct in a special way. One looks well cared for and the other looks like it needs some TLC. It is really the wonderful gardens Rawls has created, painted, and decorated that are so eye-catching. You know before the play starts that someone is a master gardener. It is an ingenious touch that when the flowers are pulled out during the play, even the soil comes with them. When they get replanted, they go in quickly and look lovely.

The costumes by Stephanie Yee fit the characters, including a pregnancy bump for Tania. Don Slater’s lighting helps create the mood, and the night scenes are still well lit. Matthew Datcher’s sound design also assists in conveying moods and transitioning the scenes.

If the play has one flaw, it is the ending which is a little too tidy. If you have ever had neighbor troubles, you might know its rarely ends this way, but it is nice to see a play that is humorous and optimistic at a time when the world seems so bleak. “Native Gardens” is a “blooming” success.

“Native Gardens’ runs through July 16, 2022 at Silver Spring Stage, 10145 Colesville Road, Silver Spring, Maryland 20901 (Woodmoor Shopping Center). For tickets go to this link. Note: Vaccination cards are required and masks must be worn in the theatre.