Theatre Review: ‘Once Upon A Mattress’ by Rockville Musical Theatre at F. Scott Fitzgerald Theatre 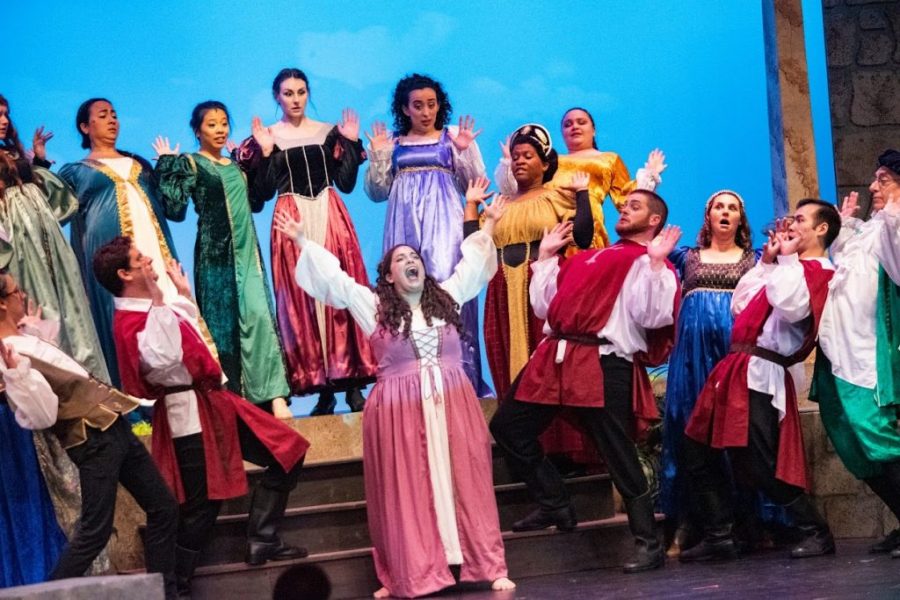 Cast of “Once Upon a Mattress.” Photo by Bruce Rosenberg.

Rockville Musical Theatre (RMT) concluded its successful run this past weekend of the classic Broadway musical, “Once Upon a Mattress,” based on the story of the Princess and the Pea. The production opens as the Minstrel (Ray Essick) describes the popular version of events while the featured dancers (Hannah Briceño, Daniel Carter, and Isabelle Olivos-Glander) used graceful, flowing movements to act it out. The Minstrel is quick to point out the many flaws in this version, which has been simplified for the general population. He witnessed the story unfold and it was far less graceful.

The year is 1428. Every maiden in the land waits with bated breath to see if Prince Dauntless (Jarod Glou) will finally marry. Every princess who wishes to marry Dauntless must pass a test of royalty, and no one else may marry until he does. Unfortunately for every hopeful couple in the kingdom, no one has passed yet. Queen Aggravain (Jenny Gleason), a typical overbearing mother who is too attached to her boy, will not let her perfect son marry just anyone. When princess number twelve is denied, the citizens of the kingdom are desperate to find a princess to pass the test. None more so than Lady Larken (Leslie Lewis) and Sir Harry (Scott Napier) who discover they have a baby on the way as they sing “In a Little While.” Larken’s sweet, yet naive, demeanor contrasts nicely with Harry’s brave, jock-like attitude. Sir Harry sets out to find a princess who has not yet been tested. Enter Princess Winnifred (Dana Robinson) or, as her friends call her, Fred. Winnifred is a boisterous, confident, and stand-out girl. Robinson delivers a full, energetic, over-the-top performance throughout the show. In “Shy,” Winnifred considers herself a shy person which the courtiers quickly doubt.

Queen Aggravain plots her newest test with her advisor the Wizard (David Gannon). They decide it shall be about “Sensitivity”—as a true princess should be sensitive enough to feel a pea underneath twenty, downy mattresses. The Queen throws a ball to ensure that Winnifred fails the test and makes everyone dance the “Spanish Panic” until they drop. Meanwhile, King Sextimus (Bob Bryant), the Minstrel, and the Jester (Colleen Prior) devise a plan to find out what the Queen has planned. The ball concludes with Dauntless confessing his love to Winnifred with in “Song of Love.” Throughout his confession, the princess performs various feats of strength and song while downing wine. In case that wasn’t enough to make Winnifred drop, the Queen gives her milk laced with opium and relaxing incense to send Winnifred off to sleep. The kingdom awaits and of course, there is a happily ever after ending, thanks to the Minstrel and the Jester who had stuffed various helmets, swords, and batons under her mattress.

This production had an outstanding, live orchestra that drew the audience into the story. Led by the conductor, Sam Weich, it featured Audrey Chang and Rachael Daudelin on violin; Stuart Weich on piano; Jeremy Keaton on cello; Lesley Cooper on flute; Tony Aragon on bass; James Berman and Michael Loebach on trumpet; Rose Weich on clarinet; Melissa Bayliss and Joshua Fleming on trombone; and George Huttlin on percussion.

The costume designer Ginger Ager dressed the cast in traditional, Renaissance clothing. The knights wore simple pants with matching red tunics and the ladies were in floor-length gowns with long sleeves. The Queen had a “Queen of Hearts” look with her wide, black wig and a towering, Medici collar behind her head. Winnifred could not stand out more in her simple, pink frock and bare feet when she arrives at court for the first time.

The scenes are enhanced by the lighting, designed by Kali Munrovia, which includes fairy gobo and seaweed gobo which create fantastical and romantic atmospheres. The set designed by Maggie Modig consisted of a main raised stage where the thrones sit in front of the castle walls. The rest of the set pieces were carried on by the actors. For the hallways, there were three marble pillars. Winnifred’s bedroom was by far the most impressive. Her room sports a deep, cerulean blue with gold accents, a wooden desk, and, by the end of the show, a looming stack of mattresses for the heroine to climb.

RMT’s “Once Upon A Mattress” was directed by Lee Michele Rosenthal and had the audience laughing along to the story. The cast and crew, all volunteers who worked to produce this heartwarming production, were honored with raucous applause.

“Once Upon A Mattress” ran from July 8-17, 2022, presented by Rockville Musical Theatre at the F. Scott Fitzgerald Theater, 603 Edmonston Drive Rockville, MD,  20851. For more information on RMT’s upcoming productions, click here.  For more information about upcoming events at F. Scott Fitzgerald Theatre, click here. Note: Guests are required to show proof of vaccination at the door or a negative COVID test within 72 hours prior to the show start time. Guests are strongly suggested to wear masks inside the theater.